THIS STORY HAS BEEN FORMATTED FOR EASY PRINTING
Question 2 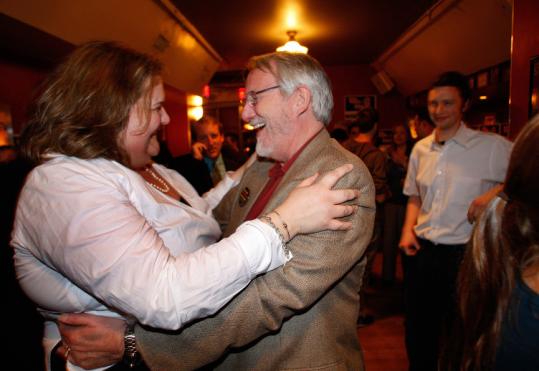 Voters yesterday overwhelmingly approved a ballot initiative to decriminalize possession of small amounts of marijuana, making getting caught with less than an ounce of pot punishable by a civil fine of $100. The change in the law means someone found carrying dozens of joints will no longer be reported to the state's criminal history board.

With about 90 percent of the state's precincts reporting last night, voters favored the Question 2 proposition 65 percent to 35 percent.

"The people were ahead of the politicians on this issue; they recognize and want a more sensible approach to our marijuana policy," said Whitney Taylor, chairwoman of the Committee for Sensible Marijuana Policy, which campaigned for the ballot initiative. "They want to focus our limited law enforcement resources on serious and violent crimes. They recognize under the new law that the punishment will fit the offense."

The proposition will become law 30 days after it is reported to the Governor's Council, which usually meets in late November or early December. But the Legislature could amend or repeal the new law, as they have done with prior initiatives passed by the voters, said Emily LaGrassa, a spokeswoman for Attorney General Martha Coakley.

Opponents of the proposition said they are concerned about the potential consequences of the vote. "The administration is clear in its opposition to the decriminalization of marijuana, and we are concerned about the effects of ballot Question 2's passage," Kevin Burke, secretary of the state's Executive Office of Public Safety and Security, said in a statement.

He would not comment on whether the administration will try to repeal the law, which will require violators younger than 18 to complete a drug awareness program and community service. The fine would increase to as much as $1,000 for those who fail to complete the program.

Proponents of the initiative, who spent about $1 million promoting it, argued the change in the law would maintain the state's existing penalties for growing, trafficking, or driving under the influence of marijuana, while ensuring that those caught with less than an ounce of pot would avoid the taint of a criminal record.

The opponents, who include the governor, attorney general, and district attorneys around the state, argued that decriminalizing marijuana possession would promote drug use and benefit drug dealers at a time when they say marijuana has become more potent. They warned it would increase violence on the streets and safety hazards in the workplace, and cause the number of car crashes to rise as more youths drive under the influence.

In a statement, the Coalition for Safe Streets, which opposed the initiative, blamed the loss on being outspent by supporters of Question 2, which included the billionaire financier George Soros, who spent more than $400,000 in favor of decriminalizing marijuana.

"Now these pro-drug special interests will move on to another state as part of their plan to inflict a radical drug-legalization agenda on as many communities as possible," said the statement.

The Rev. Bruce Wall, pastor of Global Ministries Christian Church in Dorchester, was among several prominent black ministers in Boston who called on fellow clergy to oppose the initiative.

"I guess there are a lot of people smoking the stuff, and they don't see what we see," Wall said.

"I think this points to how our Legislature is unwilling to represent their constituents on these issues," said Bill Downing, president of the Massachusetts Cannabis Reform Coalition.