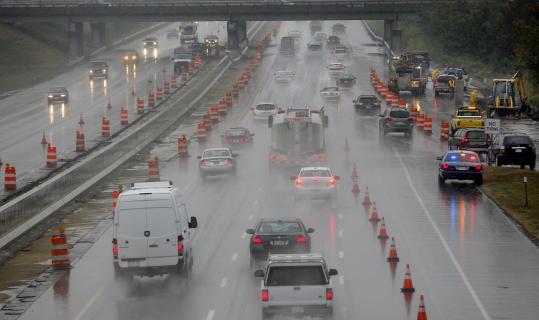 A midday trip from the Seaport District to Logan International Airport, usually no more than 10 minutes, now often takes more than twice as long because of lane closures on the Ted Williams Tunnel. One frustrated driver says work crews have added as much as 40 minutes to a daytime trip across the state on the Massachusetts Turnpike.

Unexpected traffic headaches have become the newest symptom of the Massachusetts Turnpike Authority's staggering financial woes. To save money, the authority has been shifting more construction projects to daylight hours, when fewer workers can claim overtime - and more people are on the road.

"It's all about money," said Alan LeBovidge, the authority's executive director. "We don't have any."

LeBovidge has been blunt about his cost-saving plans since he took over the job in November with a mandate to help the debt-ridden agency emerge from a cycle of deficits and toll increases. But now drivers are facing substantial toll increases, even as traffic backs up more than it did a year ago.

"I understand it causes some inconvenience; but at the same time people say, 'Don't charge us more,' " said LeBovidge, who estimates that the change combined with cuts have saved the agency as much as $1.5 million. "They can't have it both ways."

The Massachusetts Port Authority and the Massachusetts Highway Department also do some daytime construction, but not primarily for budget reasons. MassHighway Commissioner Luisa Paiewonsky said decisions are made based on traffic management and scheduling.

A Globe review of lane closures since LeBovidge took over shows he has followed through on his promise to do more work during the day. There were few, if any, daytime road closures in the summer of 2007. This past summer, nighttime lane closures still predominated, especially on Big Dig tunnel ramps. But there were an increasing number of projects scheduled in the daylight hours.

During the first week of June 2007, for example, there were no daytime lane closures, as workers accomplished most projects between about 10 p.m. and 5 a.m.

Fast forward a year, to June 2008, and there were four daytime construction jobs, all on key routes.

One of the lanes in the Ted Williams tunnel was closed between 9 a.m. and 1 p.m. for the entire work week. Lanes also were shut down on Interstate 90 between the Prudential Tunnel and the Interstate 93 interchange from 9:30 a.m. to 1:30 p.m. for most of the week. Other work along unspecified portions of the entire length of the Pike was scheduled between 7 a.m. and 3 p.m. weekdays.

"Crazy," said Ken Alasaad, a chauffeur. "The construction should be either overnight or after the rush hour."

Much of the work is regularly scheduled maintenance such as repaving. It also includes inspections and some emergency work required after the "stem to stern" safety review of the turnpike and the Big Dig that followed the fatal July 2006 ceiling collapse in the Interstate 90 connector tunnel. LeBovidge said he is trying to limit daytime lane closures to the hours between the morning and afternoon rush hours whenever possible.

Many commuters interviewed said they have not noticed an increase in traffic this summer and early fall. But those who happen to be on the road at the wrong time, particularly people who drive for a living, said the difference can be huge.

"It's a hassle," said Sam Samuels, a tour bus driver. "I can come through three states and only get traffic in Massachusetts."

If the Pike's financial picture improves, LeBovidge said, he would gladly go back to a more convenient construction schedule. But he said he does not expect that will happen soon.

At the same time, LeBovidge said, he is trying to consolidate construction projects so that lane closures do not last as long. In the past, workers would close a lane one day for a lighting project, another day for construction, and a third for something else, he said. Now, he is trying to get all the work done at one time, shortening the overall time a closure takes, he said. Costs for police details at construction sites are down $500,000 so far this year, LeBovidge said.

The Turnpike Authority is trying to cover an annual deficit that is estimated to rise from about $70 million this year to more than $100 million in the next few years.

Last week, Turnpike Authority board members contemplated a menu of possible toll increases - of as much as $1 at the Weston and Allston-Brighton tollbooths, where tolls are currently $1.25, or $5 at the Sumner and Ted Williams tunnels, where tolls are now $3.50.

Most likely, drivers would face a blend of those options, such as an increase of 50 cents at the booths and $2.50 at the tunnels. Transportation Secretary Bernard Cohen, who chairs the board, has insisted new tolls are not a foregone conclusion.

The Turnpike Authority is not the only agency that closes lanes during daylight hours. The Massachusetts Port Authority has been shutting down sections of lanes on the Tobin Memorial Bridge throughout the summer and fall, oftentimes all day for painting and redecking.

Massport officials said money is not the issue in that case. The painting needs to be done quickly because the paint won't stick to the steel in temperatures below 50 degrees. And the redecking requires 24-hour closure because it involves an entire road reconstruction, they said.

"When they redeck the bridge, they take all of the pavement out and the concrete out, so there's just the steel grid for the deck, and you don't want people driving on it," spokesman Matt Brelis said.

Some commuters aren't happy whether work is done day or night - they just want it to stop. Kelly Jameson, a hotel doorman in Boston who commutes from Saugus, said his ride home just after 11 p.m. is full of obstacles.

"It's all the time," he said. "Are they ever going to get done, for crying out loud?"

Globe correspondent Gabrielle Dunn contributed to this report. Noah Bierman can be reached at nbierman@globe.com