Whither goes the green line? 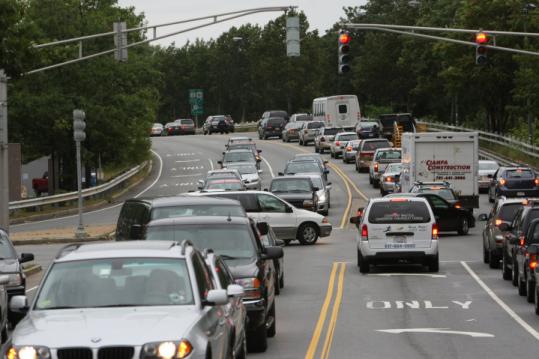 Mystic Valley Parkway in Medford is a place where the urban and suburban converge - where car noise competes with the sound of the crickets at night, where traffic weaves along the river and skirts densely settled neighborhoods, where bottle caps and discarded scratch tickets mingle in the greenery of the parkway.

Near Medford's border with Somerville and Arlington, the parkway, also known as Route 16, passes under a graffiti-speckled railroad bridge that carries commuter-rail trains bound for Lowell and back. That spot may become the end point of a roughly 4-mile, $600 million extension of the Green Line from East Cambridge through Somerville and Medford.

Or it may not.

State officials will decide this fall whether to extend the Green Line just to College Avenue, amid Tufts University and thousands of students and staff eager for a link to Boston, or continue the tracks for another mile through the Medford Hillside to Mystic Valley Parkway, near a Whole Foods store and within a half-mile walk for nearly 10,000 residents of Medford, Somerville, and Arlington.

It's a choice that has divided Medford residents and reveals how they see their city of 56,000 - to some an urban-styled cousin of Cambridge and Somerville that would be improved by rapid transit, to others a fully formed suburban neighbor of Arlington and Winchester that is just fine without the Green Line's trolley cars.

To Ken Krause, stopping short of the Mystic Valley Parkway would be, well, short-sighted. "You get a chance to do something like this once in 100 years," he said recently.

Krause, who serves on a local committee advising the state on the project, highlighted the advantages of bringing the T all the way to the parkway: More commuters could use the line, reducing auto emissions. And putting the terminus on Route 16 would mean fewer motorists would head into Tufts.

That's not how Bob Kangas sees it. He spotted Krause leading a reporter through the area and emerged to offer a rebuttal. "He's pushing it. It's a special interest," said Kangas, who thinks the extra stop would pad the project cost, rattle adjacent houses, and attract more traffic to the neighborhood.

Nearly 20 years ago, the state committed to the Green Line project to avoid a lawsuit from the Conservation Law Foundation, which threatened to block the Big Dig if Massachusetts did not also make transit improvements. But it remained on a back burner for years, until pressure from the foundation, Somerville officials, and others brought it to the fore. Governor Deval Patrick and lawmakers have pledged full funding to complete the project by the end of 2014, even if the federal government doesn't pitch in.

"We're moving forward anyway, federal approval or not," said Wendy P. Stern, state undersecretary for transportation planning and program development. "But we do feel this project is worthy at the federal level for the green light."

State planners are at an important stage. In the spring, they revealed the placement and nature of most stations, but some critical questions remain unanswered: Where in Medford will the route end, and what will that stop look like? How do you branch the route to Union Square, where Somerville planners envision the second coming of Davis Square? And where in Somerville do you put the 24-hour, 11-acre maintenance yard that will serve the new cars on the extended Green Line?

Those answers, Stern said, will come in an environmental impact report that should be released by late October.

The report, which will be submitted for state and federal environmental review, will also answer other questions, like the expected impact on ridership, emissions, noise, drainage, and private property for the preferred route and alternatives. It will allow the state to enter the engineering stage next year and prepare for construction from 2011 through 2014, state officials said.

Medford officials are awaiting the report before taking a position on the College Avenue vs. Route 16 question.

"If there's a way of doing it that's not going to shake somebody's house off the foundation, make them smell the diesel, take their yard, and flood out their basement, then let's do it," said Frederick N. Dello Russo Jr., a Medford city councilor on the Green Line Extension Project Advisory Group. "But if it's going to really do a job on people, let's quit while we're ahead and stop it at College Avenue."

In Somerville, officials and residents have embraced the project from the start; in Medford, officials are lukewarm, residents divided. That's partly because some of Somerville's stops would go to commercial or industrial areas targeted for economic redevelopment, and Medford's would not. But it's also rooted in the geography, history, and demography of the cities, and the way residents perceive their communities.

Somerville, long the densest city in New England, took shape around the rails more than a century ago, warrens of multifamily housing organized around commercial squares and served by local streetcars and rail lines that stopped en route to Boston.

But in the 20th century, planners stripped the transit stops, thrust in two elevated highways, and left the city reliant on buses and automobiles - even as the commuter trains that served outer suburbs still churned through daily.

In the mid-1980s, the MBTA returned one stop to Somerville, at Davis Square on the Red Line. Once run-down and boarded-up, Davis Square became a destination, jammed with colorful shops and restaurants and home to the city's priciest real estate.

Medford, as Green Line opponents especially note, is no Somerville. While the cities resemble each other in some places, they are essentially different.

Somerville is far more compact: It had 19,000 residents per square mile, according to the 2000 Census, while its neighbor had fewer than 7,000 per square mile. Nearly 40 percent of Medford's housing units were detached, single-family homes; in Somerville, the figure was less than 10 percent.

Although Medford in recent years has attracted home buyers seeking a more affordable version of Cambridge, it remains a place where second-generation immigrant families have obtained a share of suburbia, and where their children stay to raise their children.

And within Medford itself, there are different perspectives, often splitting along generational lines or time spent in Medford.

Krause is a freelance writer and editor who moved to Medford eight years ago. Kangas is a Korean War veteran who still refers to "Tufts College," despite a name change in 1955.

In August, the pro-transit Medford Green Line Neighborhood Alliance, of which Krause is a member, presented the City Council with a pro-Route 16 petition signed by 2,022 people from Medford and beyond.

At the same meeting, another organization, the Green Line Advisory Group of Medford, challenged the petition as unscientific and misrepresentative. That group has called for stopping at Tufts and putting the Medford extension underground.

"Arlington, Winchester, Stoneham [are] not welcoming the extension in their towns and cities, so it will stop in Medford," Jeanette Ciampi, a self-described Hillside advocate since 1962, said at the May meeting in which state officials revealed most station locations.

She asked them to spare her neighborhood.