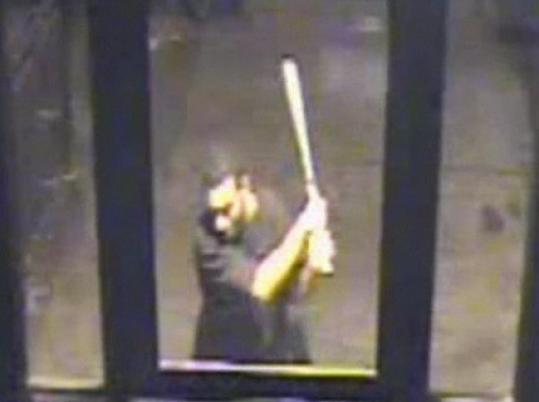 In this image from a surveillance video, a man is attacking Pelagio de la Cruz of Lynn in front of a Bronx, N.Y., building.
By Jonathan Saltzman and Christine Hauser New York Times / September 20, 2008
Text size – +

A Boston-area radio talk show host was viciously beaten with a baseball bat during a robbery in front of a Bronx apartment building, according to New York City police, who released a harrowing surveillance video yesterday of the attack.

Pelagio de la Cruz, 52, of Lynn, who hosts a Spanish-language call-in show on WESX-AM in Chelsea, was attacked in front of a building in the University Heights neighborhood shortly after 3:30 a.m. Sunday when he returned after an evening out. He was in New York visiting his children, who live in the building with their mother, his estranged wife, police said.

Police said two men had apparently seen de la Cruz on the street and followed him to the doorway of the building, where de la Cruz had been pushing the button to try to get in. One man came up behind him and swung at his head with the bat, hitting him seven more times after he fell to the ground. The other man rifled through de la Cruz's pockets. They stole his wallet and a cellphone, then fled in a dark-colored car, police said.

Police released the surveillance video in hopes of finding the assailants. De la Cruz cannot be seen in the video because he is lying on the ground.

De la Cruz lay unnoticed for about 30 to 45 minutes before a resident entering the building saw him and called 911, police said.

He was taken to St. Barnabas Hospital, where he was listed yesterday in critical condition but improving. Police said he has been unconscious since the attack and could lose an eye.

Carlos Soriano, cohost of "Conexion Hispana" with de la Cruz on WESX 1230 AM, said he learned about the attack Monday morning and promptly drove to New York to see his friend in the hospital. He said de la Cruz's head was swollen and his prognosis uncertain.

"Everybody is missing him because he's a nice guy," said Soriano, referring to employees at the station and listeners who have called the show.

De la Cruz has three children he visits in New York almost every Friday after his show, Soriano said. Soriano got worried Sunday when De la Cruz did not call him to discuss the upcoming show, as was his custom when returning to Massachusetts. Their show airs weekdays from 8 to 10 a.m. and deals with subjects ranging from the presidential race to music.

De la Cruz is from the Dominican Republic and worked in television there before coming to the United States about 10 years ago, Soriano said. He moved to Massachusetts from New York less than a year ago.

Luis Rodriguez, the station manager, said de la Cruz had worked there for about 10 months.

Manny Carrasco, who hosts the Spanish-language program "Empujando la Mañana on WRCA 1330 AM, said de la Cruz, a friend, is a big, gentle, and generous man.

"He'd take the food from his mouth to give it to somebody," he said. "He's a peace guy. He always has a smile on his face. You would love him."