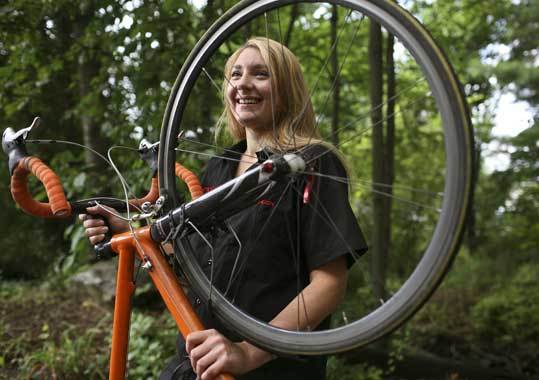 Jocelyn Gaudi, who works part time at Cycle Loft in Burlington, uses her bike to commute 20 miles each day from her home in Medford to her job at the bicycle shop, as well as to a second job in Woburn. (Pat Greenhouse/Globe Staff)
By Jane Whitehead Globe Correspondent / August 21, 2008
Text size – +

Mention gas prices to Marilyn Hartman, and she laughs. She can afford to: She pulls into a gas station maybe twice a year.

"I can ride my bike or walk just about anywhere I need to go," said the 57-year-old school nurse from Woburn who switched jobs two years ago - from Lawrence to Medford - to give herself a more manageable bicycle commute.

Hartman may be at the leading edge of a two-wheeled revolution driven by rising gas prices and health and environmental concerns.

Data on commuter bicycle use are scant, Watson said. On his daily ride from Arlington into Boston, he sees "more and more bike traffic from week to week." He mentioned a survey showing a 70 percent increase in ridership between 2002 and 2006 in Cambridge, quoted on the website of the League of American Bicyclists (bikeleague.org). He also said there is a spike in demand this year for MassBike's introductory on-site Bicycle Commuter workshops for local companies (three in 2007 compared with 15 and counting in 2008).

Of course, bike commuting has room to grow: The 2000 Census estimated that fewer than 0.4 percent of all journeys to work were made by bike.

"It's hard to change people's thinking," said Watson. "The mind-set in the US is focused on cycling as a recreational activity."

But that may be changing.

Fred Clements, executive director of the National Bicycle Dealers' Association, confirmed via e-mail that stores nationwide report "increased interest in utility use of bikes, increased sales of hybrid bikes, and more service and repair being done on bikes people already own to make them roadworthy."

Since April, according to Jeff Palter, owner of Cycle Loft in Burlington, record numbers of customers have bought commuting necessities such as rear racks, lights, panniers, saddlebags, and fenders; dragged in rusty old machines for revival; and sought advice from Palter and his team on how to cycle safely in traffic.

Cycle Loft sales assistant Jocelyn Gaudi started bicycling to work when she borrowed a friend's bike after her car was totaled in February 2006.

"I just fell in love with it. I loved the freedom of not having to wait for a bus," said Gaudi, who lives in Medford and bicycles to Cycle Loft and to her other job, as a personal trainer in Woburn.

Over two years of regular bike commuting, Gaudi has dropped 25 pounds, acquired four bikes, changed tires in snow and sleet, and learned to love watching the sunrise on her dawn ride to Woburn. (She meets her first client at 5.30 a.m.)

She has also had accidents. The most recent, a collision with a car at a Woburn intersection in June, left her with a fractured wrist and seven stitches on her chin. She's not deterred, but she's now very safety-conscious.

For workers in the sports industry, bike commuting seems a natural fit. But is it an option for professionals whose jobs demand a polished appearance?

Absolutely, said Garth McCavana, associate dean at Harvard's Graduate School of Arts and Sciences, who for 13 years has pedaled the 20-mile round trip between Lexington and Cambridge "pretty much year-round." He leaves a jacket and pants at his office, and brings in a clean shirt every day.

Lauren Dutra, a 24-year-old project engineer from the Westford office of Stantec, a national land-planning design and consulting firm, did not even own a bike when she agreed to help coordinate her branch's participation in the companywide four-week Bike-to-Work Challenge that started May 19.

Once she had the bike, the next obstacle "was trying to find a safe bike route," said Dutra, who lives in Lowell. She used Rubel bike maps, which identify bike-friendly minor roads as well as bike paths to plan her round trip of 27 miles.

"I really like the exercise and the stress release," said Dutra. Another bonus, she said, is that she arrives at work "a lot more awake" than when she drives. She plans to keep riding through the fall, at least a couple of times a week.

To keep new bike commuters such as Dutra cycling safely, communities must invest in bike-friendly infrastructure, said Phil Goff, a veteran bicycle commuter, urban designer, and sustainable transportation advocate. Goff, 40, moved to the Boston area from Portland, Ore., in 2004, and has lived in East Arlington since January 2006.

In 2005 he cofounded the LivableStreets Alliance (livablestreets.info), a nonprofit that pushes for integrated transportation solutions for Boston, including cycling, walking, and public transit.

Now he's turning his attention to Arlington. As plans for the reconstruction of Massachusetts Avenue in East Arlington get underway after Labor Day, Goff will argue for measures including bike lanes, wider shoulders on narrow roads, improved connections to the Minuteman Bikeway, and sidewalk bike racks all over town.

"This is something that needs to happen in every town across America to make safe places for cyclists."

Jane Whitehead can be reached at jwig@rcn.com.