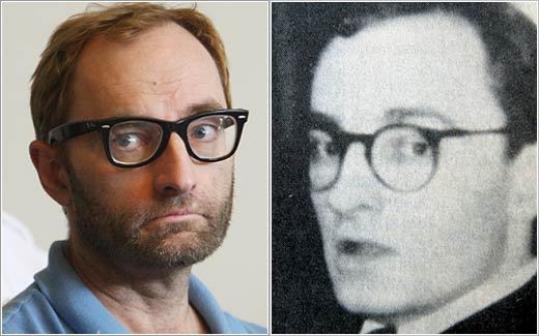 Police are investigating whether Clark Rockefeller (above, left), arraigned today for parental kidnapping, was linked to the 1985 disappearances of a couple in tony San Marino. Christopher Chichester (right), a tenant who lived in the couple's house, disappeared before they could interview him about the disappearance. (Essdras Suarez/ Globe Staff (left)/ Pasadena Star-News archives)
Email|Print|Single Page| Text size – + By Maria Cramer and Eric Moskowitz Globe Staff / August 5, 2008

The bizarre mystery over Clark Rockefeller's true identity escalated today as the Los Angeles County Sheriff's Department declared him a "person of interest" in the 1985 disappearance of a newlywed couple from a wealthy California suburb.

Two Los Angeles homicide detectives arrived in Boston late today, trying to determine whether Rockefeller is the guesthouse tenant who disappeared about the same time his landlords, John and Linda Sohus, were last seen alive in San Marino.

In 1994, a construction crew digging a pool in the yard unearthed several trash bags holding human remains that authorities believe were those of John Sohus. Neither Linda nor her remains have been found.

The tenant, Christopher Chichester, who used multiple aliases just like Rockefeller, was a focus of the investigation, but left before he was questioned, authorities said.

LA County homicide detectives became involved over the weekend when Rockefeller's fingerprints, taken after his capture in Baltimore on Saturday, apparently matched the prints on an old license application under a different name. That name, in turn, has been linked to the Sohus case. A law enforcement official said yesterday it was an application for a stock brokerage license filed with a regulatory federal agency.

The Globe first reported in today's editions that authorities were investigating a link between Rockefeller and a California slaying.

"This person back in your jail is now a person of interest in our investigation of that case," said Steve Whitmore, a spokesman for the Los Angeles County Sheriff's Department. Later, Whitmore added: "One of the things we are going to try to determine is: is he Chichester?"

Rockefeller triggered a national manhunt on July 27, when he snatched his 7-year-old daughter from a social worker during a supervised visit in Boston's Back Bay area.

Today, Rockefeller was flown to Boston aboard a commercial flight, and eventually escorted into Boston Municipal Court under heavy security. A judge ordered him held without bail.

In court, Assistant District Attorney David Deakin said investigators' knowledge of Rockefeller goes back to 1993, when he met Sandra L. Boss, whom he married in 1995 in Nantucket. Boss, a 41-year-old senior partner at McKinsey & Co., thought her husband had obtained a marriage certificate, but later she learned he never got one, Deakin said. They divorced in 2007, and Boss was given full custody of their child, while Rockefeller was granted only supervised visits three times a year, Deakin said.

Deakin said that for at least a year and a half, Rockefeller planned to abscond with his daughter. He met with realtors in Baltimore to look for homes for him and his daughter, Reigh Storrow Mills Boss, then began telling friends he planned to take her on a trip to Bermuda or Peru on his sailboat.

Deakin said Rockefeller's purpose was to misinform his friends so that "those people would inadvertently give false information to cover his tracks."

"We don't even know if he is a citizen of the United States," Deakin said.

But Stephen Hrones, Rockefeller's lawyer, said he is the man he said he is. He denied any connection between Rockefeller and the California case.

Hrones declined to say whether Rockefeller had seen or spoken to his daughter since he was captured in Baltimore, where police believe he was trying to build a new life with her.

"He's saying he loves her and misses her," Hrones said after Rockefeller's arraignment. "She was the most important thing in his life."

The possible connection to the old San Marino mystery sent a chill through the law enforcement community.

The home at 1920 Lorain Road is a two-story, brick-and-stucco house in a San Marino neighborhood of manicured lawns, palm trees, and flowers.

A man who answered at the back gate -- and introduced himself as the father of one of the homeowners -- declined to comment and directed questions to his daughter, who bought the home two decades ago with her husband. She was not home this afternoon.

Lili Hadsell, a former police officer from San Marino, said that on Monday night, she received a call from a detective in her old district who asked her what she remembered about the case of Jonathan Sohus and his wife, Linda, who were in their 20s at the time of their disappearance.

"They just said they were looking into it," said Hadsell, who is now chief of police in Baldwin Park, Ca. "I was actually thrilled because I thought, 'well good, maybe they've got some kind of lead and it would be nice to find out what the mystery is after all these years."

Boston Police Commissioner Edward F. Davis today confirmed that the FBI had linked Rockefeller's fingerprint to an alias in California in the 1980s and that Boston police had been in touch with detectives there.

In 1985, Ruth Deidrik Sohus, John Mohus's adoptive mother, worried when she hadn't heard from her son and his wife and called police to file a missing persons report, according to Hadsell.

"He was just very elusive," Hadsell said. "We were never able to pin anything down on him, never were really able to figure out where he came from, what he had done. [He was] one of these people that kind of appeared and then disappeared and no one seemed to know anything about him."

Sohus's mother died in 1988, believing her son and his wife had left for Europe, without saying goodbye or taking the car, said Marianne Kent, a friend of Ruth Sohus.

"She always believed he was alive, and she didn't understand why he didn't write. She said, 'I guess now that he's married, he has a life of his own,' " said Kent, now 79. "She lived for that boy."

Once, a relative of Linda's received a postcard from Europe that apparently was from the couple, but she never heard from them again, Kent said.

In 1994, police thought they might have found the couple's remains when human bones were discovered in the backyard of their Lorain Road home. The bones were found by swimming pool excavators hired by the new owners.

A fracture pattern on the skull revealed the person was struck one to three times in the head before death, said Steve Dowell, the tool-mark expert for the Los Angeles County Department of Coroner and sheriff's department, who studied the remains.

The blows could have come from a two by four, Dowell said, adding, "It could have even been a hammer."

The damage from the backhoe, however, was so extensive, it was impossible whose bones they were, Dowell said.