Trying to outlaw an herbal high 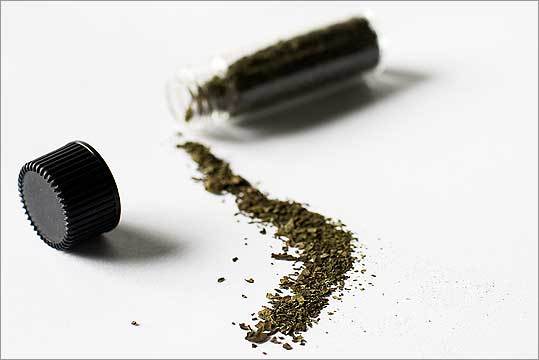 Mention salvia to gardeners and chances are they'll think of a flower with spikes of purple blooms. Mention it to young people on local campuses and they might think of a related plant, salvia divinorum, which produces short, intense hallucinogenic trips when smoked.

Look for salvia on the Drug Enforcement Administration's list of illicit drugs, however, and it won't be there. Salvia divinorum is legal in most states, including Massachusetts, and available in both smoke and head shops and on the Internet.

That could well change. A bill that would outlaw salvia in the Commonwealth is moving through the Legislature. At the federal level, the DEA considers salvia to be a "drug of concern" and is working with the Food and Drug Administration to determine whether to classify it as a controlled substance.

A dozen states have outlawed or begun regulating salvia since 2005, including Delaware, whose law was pushed by a mother who believes salvia contributed to her son's suicide. Massachusetts is among more than a dozen other states considering limiting or banning its sale. Online purveyors warn that time is running out to buy salvia legally.

The object of all this attention is an herb from the sage family that Mazatec Indians in Mexico have long used for spiritual and healing purposes. Considerably less popular than alcohol and marijuana - and less used than cocaine or opiates - salvia is a fringe drug that is taking center stage on hundreds of YouTube videos that typically show young people inhaling it through a water pipe and almost immediately becoming visibly disassociated from reality.

"Drug abuse has a word-of-mouth, kid-to-kid, abuser-to-abuser quality, and you put that into a factorial when you put it on the Internet," said DEA spokeswoman Rogene Waite. "There just became increasing queries about salvia."

Students interviewed by the Globe on several campuses - Northeastern University, Boston University, and Berklee College of Music - who have smoked salvia describe visual and auditory hallucinations. For one young man, the sound of raindrops hitting trees triggered a hallucination of sitting around a campfire during the Revolutionary War, wearing tri-cornered hats and wielding muskets. For another, Christmas lights became floating candles. Another had to stop his car because he forgot how to drive.

"It's not something that makes you feel good like a lot of other drugs. It gives you an experience," said a 20-year-old Northeastern student named Patrick, who, like other students interviewed for this story, asked that his full name not be published because he believes the stigma of drug use outweighs the fact that salvia is legal.

"For five minutes it was an intense out-of-body experience," said Sid, a 20-year-old BU student. "It was great. Then it was over. It was a good five minutes, but not worth 60 bucks or whatever we paid."

"You're disconnected from yourself. It's like you're dreaming," said Derek, 20, of Northeastern. "It's so intense, so overwhelming."

That the experience is intense and overwhelming is clear from the YouTube videos, a number of which have generated hundreds of thousands of clicks. They show salvia users laughing uncontrollably, zombie-eyed, unable to perform simple tasks or to communicate effectively.

Beacon Hill lawmakers got a glimpse of these videos when Paul Hayes, the recently retired Hanover police chief and a member of the Governor's Advisory Council on Substance Abuse, showed some earlier this year when he testified in favor of outlawing salvia before the public health and judiciary committees.

"Everyone that has seen this has been surprised," said Representative Vinny DeMacedo, a Plymouth Republican who cosponsored the bill. "It's a totally uncontrolled substance that has pretty profound impacts."

The bill would also outlaw kratom, an opiate-based substance from Malaysia, and khat, an herbal stimulant from Africa, as well as rosebud pipes often used to smoke crack and so-called "blunt" wrappers used to roll marijuana cigarettes.

"These are the upcoming drug trends," said Hayes, who urged DeMacedo and Representative Daniel Webster, a Pembroke Republican, to introduce the proposed legislation. "We're trying to get on board so it doesn't become more of a problem."

The public health committee issued a report in March recommending passage of the measure, and the judiciary panel issued a favorable report last week. The bill's sponsors hope it comes to the floor for a vote before the Legislature adjourns July 31.

Salvia's psychoactive ingredient, Salvinorum A, is "the most potent naturally occurring hallucinogen," according to the University of Maryland's Center for Substance Abuse Research, and little is known about its long-term impact on the brain or other organs. Its effects are so powerful that many websites promoting the herb recommend that a sober "sitter" monitor and reassure the salvia user. In addition to being smoked, salvia, a semitropical perennial that can also be cultivated indoors, can be chewed or taken as a liquid extract. It has no FDA-approved medical use.

Salvia, which comes in a variety of potencies, was the second-most common legal recreational drug, after ephedra, marketed on websites touting legal highs, according to a 2005 study by researchers at the University of California San Francisco.

Buried Treasures, a Boston shop that carries salvia, provides information sheets that warn against operating heavy machinery or mixing salvia with alcohol or other drugs. "In order to keep Salvia legal," it concludes, "please use it in a responsible manner."

David Brennan carries salvia in the four Brennan's Smoke Shops he owns in the southern suburbs of Boston. The price ranges from $13 to $60 a gram, depending on the strength.

"In my 10 years of being in business, we carry it from time to time," Brennan said. "If you take any particular product, whether it be sniffing glue or sniffing paint, if there's an abuse to the product it will be abused by people who want to abuse it."

"You will have less people trying it if you make it illegal," she said. "It would be better certainly for kids not to use it."