Why polar bears? And why outside Memorial Hall Library in Andover?

The answer is, said Karen Herman, president of the library's board of trustees, "Why not a polar bear?"

The statue of a mother polar bear and three cubs "should create a conversation," said Herman, who pushed for the installation of the sculpture, which will be unveiled Saturday.

Herman said she believes public art might prompt one person to say, "I love it." Another might say, "I don't get it." Heated discussion, she said, is part of the public art experience.

However, the real arbitrators of taste may be the children. The 5,200-pound white, flecked granite sculpture of the bear family, created by Jim Sardonis of Randolph, Vt., has been designed for little hands to explore and little feet to climb.

Sardonis, renown for his realistic yet evocative sculptures of animals and other natural forms, said he created the grouping with children in mind.

The tale of the bears has been years in the making, according to Herman. In 1987, a piece of public art at the library was destroyed in a storm; the library received an insurance settlement that trustees decided to use for replacement art, Herman said.

Trustees learned of Sardonis's work and visited his studio about six years ago.

Sardonis, whose art can be viewed at sardonis.com, is best known for his mammoth sculpture of two granite whale's tails emerging from a grassy field adjacent to Interstate 89 near Burlington, Vt. He has also carved "Great Auk Family," commemorating the extinct birds, for the New England Aquarium, and the marble "Sleeping Dove" statuettes given by Harvard Medical School's Center for Health and the Global Environment as the school's annual Global Environmental Citizen Award. The head of "Piper," a privately commissioned portrait of a beloved dog, peers through a cement fence along Commonwealth Avenue in Boston's Back Bay.

The Andover trustees were impressed.

"His work is so naturalistic, but with his own view," Herman said.

"I think that it often amuses people to question, 'Why is this here?' That alone is a good thing; it makes people come up with their own reason. Why is a whale in Vermont and why is a polar bear in Andover? It has to do with the interconnectedness of all living things and how we are dependent on each other." Sardonis said. "Even though polar bears are not part of our lives, we do impact them and other creatures all over the world. We have an effect on things that are far away from us."

Still, the $70,000 price tag has raised eyebrows in Andover, particularly at a time when municipal budgets are under financial pressure. Herman said the funds for the sculpture come out of an endowment that cannot be used for normal library operations.

She also said she believes the bears could become a teaching tool; polar bears are also frequent characters in children's literature. The library plans to offer fall programming on environmental issues.

Last month, polar bears were added to the threatened list under the federal Endangered Species Act, due to the decline in Artic sea ice thought to be caused by global warming. This designation happened long after the trustees decided to pick a polar bear as a theme, Herman said.

Sardonis, who has been working on the polar bears sculpture for the last six months, has made the mother and cubs life-size, with a bit of exaggeration in the cubs' paws and heads to fit the design and to account for how "children will be climbing all over them." The 6-foot-long, 4 1/2-foot-high grouping will have a fine texture and be covered with a sealant to protect against graffiti.

Sardonis, Herman, and other officials will speak at the unveiling ceremony.

"I'm a firm believer in the power of art and how art can move a community," Herman said.

The final word, however, will come from children who, if environmental trends continue, may inherit a world without wild polar bears. 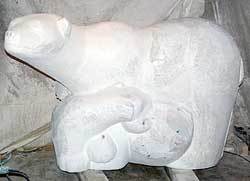