DA says Marzilli 'out of control' 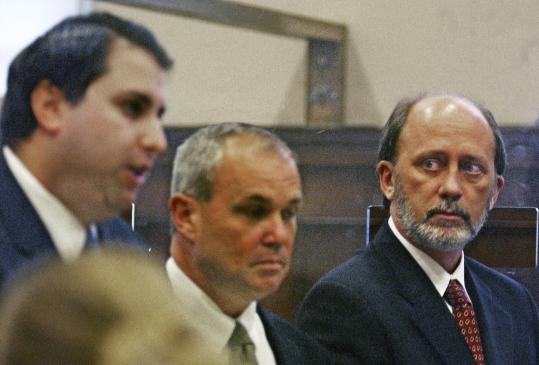 On Tuesday afternoon, the veteran lawmaker fled police who tried to question him, causing cars to swerve out of his way and pedestrians to scramble as he darted through city streets. Marzilli was arrested in a parking garage, where he was cut off by police cruisers chasing him. After officers threatened him with pepper spray to make him submit to handcuffs, according to a police report, he broke into tears and cried that his "life was over."

Friends and political allies were shocked at the apparent unraveling of a career that had taken Marzilli from the trenches of political organizing in the 1980s to the state House in the '90s and the Senate last year. A self-described ultraliberal, Marzilli has been a darling of unions, environmental groups, and social service organizations whose causes he championed.

"This does not conform to the behavior of the Jim Marzilli who we know and love," said George Bachrach, a former Democratic state senator from Watertown and a longtime friend who hired Marzilli to run his campaign for governor in 1994. "I feel many of us who had positive relationships with Jim professionally feel deeply for him now personally."

Marzilli, an Arlington Democrat who served for 17 years in the House before being elected to the Senate in a special election last year, is up for reelection this fall. He is facing two Democratic opponents and had been considered certain to win the seat. Instead, he could face up to five years in state prison if he is convicted of the most serious charge against him, attempt to commit indecent assault and battery.

Prosecutor Richard M. Mucci asked that Marzilli be jailed until a judge could determine whether he poses a threat to the public. Marzilli's actions were "frightening and out of control at this point, because he is accosting local women in Lowell," Mucci said.

Judge Neil Walker denied the request, but ordered Marzilli to stay out of Lowell. Because he posted $1,500 bail Tuesday night, Marzilli was allowed to go free and was ordered back in court for a pretrial hearing next month.

"He intends to continue to fight the charges," Marzilli's lawyer, Terrence W. Kennedy of Everett, said yesterday. "He is innocent."

Marzilli's wife, Susan Shaer, sat in the back of the courtroom during the proceedings. Shaer - who is executive director of Women's Action for New Directions, an antiwar group - later took her husband's arm as they departed the building and walked down the courthouse steps.

After Marzilli's court appearance, Leone said Marzilli was also being investigated for "inappropriate touching of a female," in Brighton two years ago, other incidents in Lowell Tuesday, and one in Arlington a year ago.

Arlington Police Chief Fred Ryan said the investigation in Arlington began after a woman came forward yesterday to report "inappropriate and unwanted touching," by Marzilli in a home last year.

Less than a month ago, Leone concluded there was not enough evidence to charge the senator with inappropriately touching another woman in his hometown in April.

"We are aware of the possibility of other matters, but we are developing those as we speak and are urging others, if they know of or have been victimized, to come forward," Leone said yesterday.

Marzilli's most recent troubles started at about 11 a.m. Tuesday, when, according to a Lowell police report, he approached a woman on a downtown street in Lowell and said: "Oh, baby, you're so beautiful. Your body is so perfect."

The report said that the woman turned around and saw a man, whom she later identified as Marzilli, and said, "What is your deal?"

The woman said she walked away, but Marzilli followed her and repeated similar comments, according to the police report. She became angry, and told Marzilli, "take $20 out of your pocket and go to Merrimack Street after 5 p.m. and get yourself a hooker."

As the woman walked toward a parking garage, she saw two police officers on detail and told Marzilli that she would tell the police if he continued to follow and threaten her, the report said. The woman said that Marzilli then put his hands in his pockets and left her alone.

The report said that about four hours later, Marzilli approached another woman on a park bench about a block away.

That woman told police she had seen Marzilli in the area last week "wearing dirty clothes" and looking "unkempt and possibly homeless," according to the report.

But on Tuesday, he was dressed in business attire, with slacks, a shirt, and a tie, the report said. Marzilli asked her if she remembered him, to which she replied yes. He then told her that he thought she was beautiful. The woman told police that Marzilli then reached toward her with his hands and attempted to grab her crotch, but she grabbed his hand to stop him and told him, "Don't you dare."

Marzilli then made a lewd remark, the report said. The woman went to a nearby apartment complex and reported the crime to staff at the front desk. Two maintenance workers flagged down police, who caught up with Marzilli. Police said the senator told them that he was flirting with the woman and that his name was Martin Walsh of Medford.

Martin Walsh is also the name of a state representative from Dorchester. Yesterday, Walsh said he was disappointed that Marzilli had used his name. "Obviously, I don't want my name associated with that," Walsh said. ". . . He could have used any name. I don't know why he did that."

After police started interviewing Marzilli Tuesday, they said, he started acting nervously and ran away. He ran past a hot dog cart, causing several people in the area to dash out of his way, police say in the report.

Marzilli ran down the center of busy Market Street, between cars, and in the opposite direction of one-way traffic, causing several vehicles to swerve to avoid him, police said. Officers caught up with Marzilli in a parking garage, where they saw him zigzagging through parked cars on the first level, before an officer cut off his path with his police cruiser.

Police said that Marzilli resisted arrest several times and that they twice threatened to use pepper spray to get him to place his hands behind his back.

Marzilli told police that "his life was over and that we were destroying him," according to the arrest report. The officers told Marzilli that he would be able to post bail and would be out by the end of the day, but Marzilli replied "you don't understand . . . I'm a state senator," the report said.