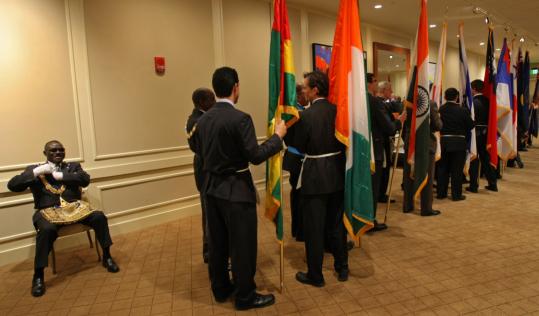 Dressed in dark suits with white gloves and aprons, hundreds of men gathered at the Copley Westin Hotel yesterday afternoon to celebrate the 275th anniversary in Massachusetts of the Freemasons, a fraternal organization often perceived as a secret society shrouded in conspiracy theories, such as a quest for world domination.

After all, Freemasons - known for their secret handshakes, codes, and initiations - took an active role in the Revolutionary War and have since remained active in American politics.

But as far as Roger William Pageau, grand master of the Grand Lodge in Massachusetts, is concerned, the group is simply about brotherhood, truth, and making the world a better place to live.

"We really don't have any secrets," said Pageau, wearing a dark, Colonial-like hat with gold trim, pointing out that much can be discovered about the organization on the Internet and that exposés have been written about the group pretty much since its founding in England in 1717.

The organization - which can conjure up the image of a bunch of gray-haired men in funny hats - is experiencing a resurgence in popularity. The number of new members initiated last year, 1,393, was 101 percent higher than in 2004. One of the fastest-growing areas of membership is the under-40 set, fueled in part by a move a few years ago to lower the entry age from 21 to 18.

The lodge at Harvard University, for instance, has about 400 members today, compared with less than 60 in 1999.

Raul Campillo, a 20-year-old junior at Harvard, said he joined a few months ago because all of the men on campus that he admired were masons.

"You want to associate yourself with great people because they make you a better person," he said.

The organization has become a part of popular culture, thanks to references to the group in the controverisial book "The Da Vinci Code" and the Hollywood mystery thriller "National Treasure." Freemasons are also active in charitable causes and government.

"Our members are on the Board of Selectmen, they are singing in church choirs, and they are working in soup kitchens," Pageau said.

Yesterday's event, which capped off a three-day celebration, drew representatives from lodges as far away as Chile, Russia, and China, many of whom marched into a fourth-floor ballroom with colorful flags.

"The truth of the matter is it's a fraternity, an organization that brings men together to develop bonds of brotherhood," said H. Robert Huke, a spokesman for the Massachusetts Grand Lodge.

"The tenets of our profession are brotherly love, relief, and truth."