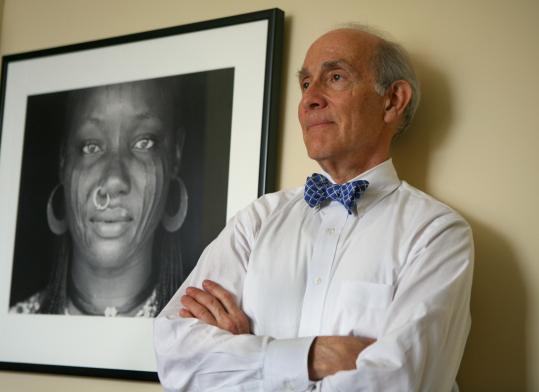 : "I approached that meeting with some anxiety. . . . I had positions that would be at odds with his." (WENDY MAEDA/GLOBE STAFF)
Email|Print|Single Page| Text size – + By Billy Baker Globe Correspondent / May 1, 2008

A Nobel laureate scientist and a leader of the evangelical Christian movement walk into a restaurant.

It sounds like the setup for a joke, a scenario that is screaming for a punch line that plays off the seemingly endless disagreements between faith and science.

But this is a true story, and Dr. Eric Chivian and the Rev. Richard Cizik have come up with a zinger no one could expect. They went to lunch together to agree on something - the need to curb negative human impact on the Earth. And the partnership they formed that afternoon in 2005 has led this odd couple of the environmental movement to be named, today, to Time Magazine's list of the 100 most influential people in the world.

"I must admit I approached that meeting with some anxiety," said Chivian (pronounced chih-vee-an), director of the Center for Health and the Global Environment at Harvard Medical School, "I'm involved in evolutionary biology. I support stem cell research. I have gay friends who are married. I felt I had positions that would be at odds with his."

Cizik (pronounced sigh-zik), vice president for governmental affairs for the 45,000-church National Association of Evangelicals in Washington, D.C,, had similar reservations. But, as they point out, they were not there to discuss their differences. What brought them together is what Chivian calls "a deep, fundamental commitment to life on earth."

Together, they formed the Scientists and Evangelicals Initiative, which aims to unite the two communities to help bring an environmental message into the large and powerful evangelical movement.

The problem, according to Cizik, is that many in the evangelical community have built a barrier between themselves and the scientific community because of the way they have been treated for their belief in creation over evolution. As a consequence, many have made what Cizik calls the illogical decision to turn a deaf ear to what science has to say about climate change.

"It's God's creation that is at stake," he said. "If we don't address this problem, history will not forgive us, and God won't either. He's given us a mandate to care and protect His creation. When we die, He's going to ask us what we did with what He created. That's the question that every one of us has to answer."

The two have organized a retreat for religious and scientific leaders, delivered a statement to the National Press Club calling for Evangelicals and environmentalists to come together - a move that led 25 religious leaders to write a letter calling for Cizik to be "silenced or fired," he said - and led a joint expedition to Alaska to witness the effects of climate change.

In the Time Magazine issue, which hits newsstands tomorrow, Chivian and Cizik are referred to as an unlikely pair. That's putting it mildly: Their current collaboration is deeply ironic when you consider that these new friends both made their names on the opposite sides of another frightening global issue: nuclear arms.

Cizik, now 56, drafted the letter that invited President Reagan to address the National Association of Evangelicals in 1983 about the US-Soviet nuclear standoff. That address was Reagan's famous "evil empire" speech.

Chivian, a professor of psychiatry at Beth Israel-Deaconess, shared the 1985 Nobel Peace Prize for his work as a founder of the International Physicians for the Prevention of Nuclear War, an organization that brought US and Soviet doctors together to make clear the horrific medical reality of nuclear war.

For Chivian, his work with Cizik is in many ways a continuation of what he began during the nuclear standoff. "It's another case of bringing together communities that are at great odds to speak as one on an issue of enormous importance," he said.

On the whole, both Chivian and Cizik said their scientist-evangelical partnership has gone smoother than either anticipated. Before bringing both sides into the same room, Chivian consulted with conflict resolution specialists; they never needed them. The scientists have agreed to refer to the natural world as the creation, and evangelicals have painted the broader issue under the umbrella term "creation care." (Chivian, personally, thinks "Armageddon in slow motion" is a more apt description.)

Chivian, 56, said that the initial success has left him with no other position than to be optimistic about the future.

"Whether you believe God created life on earth, or that it evolved over billions of years, it doesn't matter. We all feel that life, however, it came to be, is sacred. And it is our shared duty to protect it."