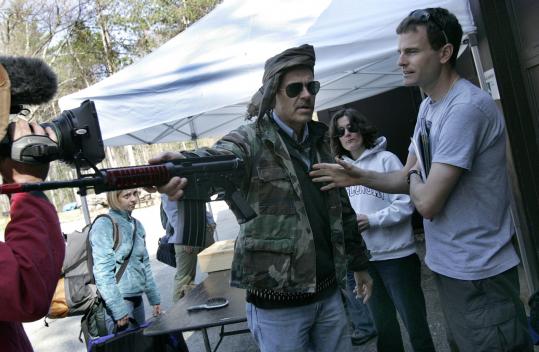 NORTH ANDOVER - This weekend, Jamille Bigio is pretending that the ponds and woods of Harold Parker State Forest are the arid countryside on the Chad-Sudan border. When she hears gunshots fired by turkey hunters, she will pretend that it is the sound of clashing militias in the war-torn Darfur region.

The Harvard graduate student is planning to go abroad to do humanitarian work when she graduates this spring, even if the thought of gunfire in a foreign country gives her a twist "in her gut."

"For me the struggle is to get an appreciation of what's going on on the ground," the 26-year-old said yesterday. "I don't want to be a policy wonk."

Many college students have protested the humanitarian crisis and the killings in Darfur. But about 50 medical residents and graduate students from Harvard and Tufts are getting a taste of what the conflict might look and feel like up close.

Campers in the tick-infested forest will eat only military rations and pretend that they work for organizations like Oxfam, CARE, and Doctors Without Borders. As part of training to become the next generation of leaders of such relief organizations, they must learn how to manage a refugee camp.

Peter Walker, a Tufts professor and one of the organizers, said the program is designed to help students see whether they are cut out for humanitarian work and the sacrifices it requires. As part of the exercise, the students are responsible for helping 5,000 refugees survive in makeshift camps.

The refugees are represented by flags and sticks. Walker has helped plan rebel raids, confiscations, robberies, ethical dilemmas, and other real-life crises, many of which he has experienced first-hand in his 20 years in humanitarian work.

For nearly three days, students are not allowed to use their cars and can rely only on what they have packed. A student who called organizers yesterday morning to request a can opener was met with a laugh.

"You've got no right to personal angst" in these situations," said Walker, who wore a flak jacket as he stood at the command center. "Get over it."

The students oversee five refugee camps in the woods, each named after an actual camp along the Chad-Sudan border. The main camp was home to several teams who posed as relief workers from various agencies. Each had specialties in areas like medicine, water and sanitation, or nutrition and were asked to create proposals, assessments, and security plans for the camps.

Participants were expected to act "in role" the whole time, with the exception of a two-hour break tonight.

At any given time, the teams would have to address such problems as the sudden illnesses or deaths of refugees from malaria, random kidnappings, or encounters with armed children involved in militias. Students could find refugee camps filled with wooden poles, signifying the deaths of refugees during the exercise.

The scene in North Andover was modeled after the real-life experiences of a former Harvard student who worked near the Sudanese border and was evacuated when violence erupted.

In Sudan, the killings began in 2003 after two African rebel groups stepped up their armed struggle against the Arab-dominated central government in Khartoum.

The government responded by arming fearsome militias, known as Janjaweed, who began killing civilians whom they considered sympathetic to the rebels.

Earlier this week, the United Nations said the death toll from fighting, malnutrition, and disease linked to the conflict could be 300,000. Aid groups say the fighting has displaced at least 2 million people.

One of the Harvard students, Peter Howard, has already been to Iraq, where he was once held at gunpoint, and to Indonesia, to do humanitarian work in both nations for the organization Food for the Hungry. He took a year off to attend graduate school, but plans to return to such work this summer.

Yesterday Howard got a dose of the program's tough love. He arrived at the area simulating the Chad-Sudan border, only to be frisked by border patrols who confiscated his shirt. They told him the plaid pattern made him look like a rebel sympathizer and then detained and harassed him.

Despite such challenges in the field, Howard said he plans to return to Iraq and anywhere else where disaster and war might erupt.

"When I'm around broken people, something kicks in, and I want to help," he said.

Emily Hyle, a resident at Massachusetts General Hospital, had her flashlight confiscated at the makeshift checkpoint. She was given no reason why, and the New York City native never asked, saying she made every effort to temper her response.

One day, she said, she plans to work in hospitals in war-torn countries. "This is something that I can add to my skill set," Hyle said.

Hilarie Cranmer, one of the program's physician organizers and director of the Humanitarian Studies Initiative for Residents at Massachusetts General Hospital, said the terrain might not be much like Africa, but students will probably gain important insights into what a humanitarian mission there might demand.

She said she hopes they will learn about their ability to focus on the well-being of others under the most stressful conditions.

"It's not just about making them suffer," Cranmer said of the weekend experience. "Well, it is. But you also want to make them think there might not be a right answer to every question. . . . And they have to defend their decisions later on."