A mecca for fans of N.E. football 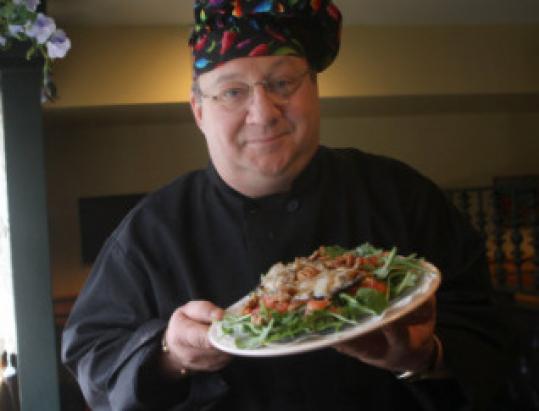 Inside Gillette Stadium, the Patriots proudly hang their championship banners saluting the three Super Bowl titles from the last decade. But the team's legacy and the vision of owner Robert Kraft extend far beyond the town of Foxborough.

In September, the team will unveil an exhibit that not only will celebrate the rich tradition of football throughout New England, but will also serve as an electronic encyclopedia, highlighting more than 600 high school, youth, and college teams.

"We want this to be the mecca of football in New England on all levels," said Bryan Morry, executive director of The Hall at Patriot Place.

Examples could be the storied history of football at Brockton High, dating to the program's first team in 1897; Natick High's incredible runs, past and present, under Tom Lamb; Acton-Boxborough and its record-setting winning streak; and Everett's unparalleled success with John DiBiaso patrolling the sideline. The memories of players, coaches, games, and championships will no longer be sealed in old newspaper clippings or relived solely through the tales of old-timers. Schools will able to upload facts, figures, and pictures to NewEnglandFootball.com. More than 640 schools have been invited to sign up on the password-protected site to begin uploading information.

At The Hall, an interactive touch-screen kiosk will allow visitors to find a school in New England through the website and read what has been added.

It will not be "just for Patriots fans, but a place for football fans of all ages," Kraft said from the NFL's annual meetings last week in Palm Beach, Fla.

"This new site will give them a place to share information about their teams with football fans who visit The Hall. It's also a place where we can honor the recent state champions on an annual basis."

The quality of the website will rely heavily on the participation of New England schools. The more information they provide, the stronger the resource will be. Details of rivalries, traditions, and milestones will be among the information featured.

"As we move forward, it would become a sort of history book for high school programs so that in 20 years you can come back with your kids and tell them when you played on this team in 2008, and there is information about the 2008 season," Morry said.

The exhibit also will feature a Wall of Champions that will include the jerseys of more than 50 New England state champions and Pop Warner regional champions. There are plans to hold a ceremony for raising the jerseys, Morry said.

Once the doors open in the fall, Morry said, he expects more schools will add more information to their program's page.

Embracing the concept, Brockton coach Peter Colombo said, "This can be a place where things are accurate and a one-stop source to go and find what you need.

"If it's like everything else the Krafts have done, it will be first class."

Photos have been submitted from fans and families to create a mural of New England football that will serve as a backdrop.

Morry said Kraft was not "looking for a graveyard of artifacts" when designing the exhibit. To present the best display, Cambridge Seven Associates created the interior design, Mystic Scenic of Norwood fabricated the exhibit, and Cortina Productions of Virginia handled the audio and video.

St. John's of Shrewsbury coach John Andreoli came away impressed with the Krafts' plans after viewing a presentation at a Patriots Alumni Club meeting in February.

"It's going to be quite state of the art," said Andreoli, a former linebacker at Holy Cross who spent the 1984 season on the Patriots' injured reserve list before a stint with the Boston Breakers of the United States Football League. "Everything the Patriots have done down there is first class. This will be no different."

"The organization and the Krafts have really tried to expand their reach from a community standpoint beyond the Patriots, and this is another avenue to do that," Morry said.

Last December, the Eastern Massachusetts high school Super Bowls returned to Foxborough and will be played at Gillette Stadium at least through the 2009 season.

"This is another piece in a number of specific things the Patriots have developed over the past couple of years that demonstrate their sincere interest in all levels of football statewide," said Bill Gaine, deputy director of the Massachusetts Interscholastic Athletic Association. Gaine said the MIAA is working with the Patriots to spread the word about the exhibit and website so that member schools can update their information.

Bruce Rich's most recent trip to Gillette Stadium was exciting. His Chelmsford squad earned its first Super Bowl win in 13 years, beating Marshfield with a last-second field goal. His next visit, to The Hall, will likely be just as exciting.

"I'm going to get down there to check it out, without a doubt," Rich said. "As soon as it opens, we'll be there."

He will have a championship jersey in tow to put on display, the No. 4 worn by his son Tim, the team's starting quarterback and The Boston Globe's Division 1A Player of the Year.

Even in defeat, Marshfield coach Lou Silva said, he "felt like one of the kids myself. I had to remember, 'I'm here to coach.' "

Now there will be a permanent place for high school football to be chronicled within the Patriots' complex. Silva said a website like NewEnglandFootball.com will not only serve as a historic reference but will also be a resource for others all over the country.

"Anything you can do to promote high school football, I think it's just great for the community," said Acton-Boxborough coach Bill Maver.

Waltham High coach Paul Mayberry said, "To tell the truth, I think there is a lot of football history within Massachusetts that hasn't been represented nationally, talked about, or . . . records that haven't been obtained for a while for us."

The Patriots, with their unselfish, team-first approach, "provide us with a great model all the way around to teach from," said Colombo.

Their home, then, is a fitting place to honor the history of New England football.

Julian Benbow and Mike Reiss of the Globe staff and correspondent Brendan Hall contributed to this report. Monique Walker can be reached at mwalker@globe.com.

News of local residents serving in the military. 6