THIS STORY HAS BEEN FORMATTED FOR EASY PRINTING
somerville

Tom Champion has a voice that carries 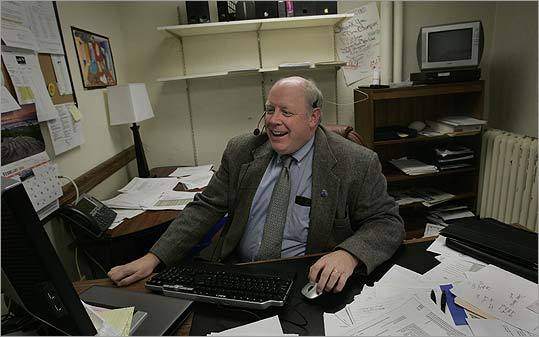 It all started with a phone call.

Reaching thousands of Somerville residents with automated messages to move their cars during snowstorms, city spokesman Tom Champion and his clarion calls have attracted a loyal following of fans. They created a Facebook group in his honor and have penned haiku poems about his morning wake-up calls.

Georgy Cohen, who put together the Facebook group with a co-worker at Tufts University, said a "cult of personality" has developed around Champion. "You get these calls from someone with such a wonderful voice, it sort of gives rise to an urban hero," she said.

Champion, who seems pleasantly surprised by his new celebrity, attributes the attention to his deep voice and memorable name - Cohen called it "the best name in city government."

His appeal could also stem partly from how will ingly he plays along. When he learned of the Facebook group this winter, he signed up for an account and joined the group, which now has more than 60 members. A shocked Cohen promptly made him an officer.

Between December snowstorms, a "Tom Champion Haiku Smackdown" appeared on the Somerville Journal's blog. The posts included a haiku poem in Spanish and one that compared Champion to Paul Revere. Many refer to the early hour of his calls, which have been known to go out at 6:45 a.m.

It's snowing again.
How can I be so sure now?
Tom Champion said so.

Which relative died?
Only death calls this early
(and Tom Champion)

In response, Champion chimed in with haiku of his own.

Shall we make the call?
Snow falls while citizens sleep.
No easy choices.

Then, after Somerville declared the fourth snow emergency of the year in February, someone posted a lolcat on Davis Square Live Journal, featuring pictures of two cats talking on the phone, one of which is posing as Tom Champion and saying, "muv da carz plz."

Rebecca Marchand, a 31-year-old newcomer to Somerville, said learning about Champion Facebook group "made my day."

"I thought it was really funny that people find this city official endearing enough to write poetry about," she said.

His new Facebook "friends" have gone so far as to call him "hip" and "savvy." But Champion doesn't think of himself that way.

He's 53, drives an old station wagon, and lives with his wife, teenage daughter, and two cats. Though he doesn't have a BlackBerry or an iPhone, the political junkie and former stage actor embraces new forms of communication, some of which he learns about from his younger staffers.

He has fiercely defended himself and the city administration on The Somerville News website from time to time, which he now says was a mistake. And he joined Davis Square Live Journal so he could participate in residents' conversations about city services and offer advice.

At times, his tireless promotion of Mayor Joseph A. Curtatone can verge on overkill.

"Stop the insanity!" he writes on the wall of his Facebook group. "Somerville is the Land of Curtatone. I'm just a mouthpiece."

The mayor, for his part, seems unaware of his spokesman's newfound fame and said he didn't know about the Facebook page or the haiku. By way of explanation, Champion offered that "the Web is not [Curtatone's] realm."

Champion, who has worked for the city since 2005, said he's a little surprised by the attention, which has coincided with an unusually snowy winter. "It's not what I signed up for," said Champion, a former public affairs officer for the Massachusetts Port Authority.

When one of his staffers sends out phone alerts instead of Champion, some residents call to ask what happened. Occasionally, when he meets new people, they recognize his voice.

Marchand, an adjunct professor who said she would like to meet Champion, said it's rare for someone to connect ordinary residents and city government the way he does.

"What's so great about Tom is kind of what he stands for," she said. "He's sort of really emblematic of a city caring about its citizens."

And you can't buy better PR than that.