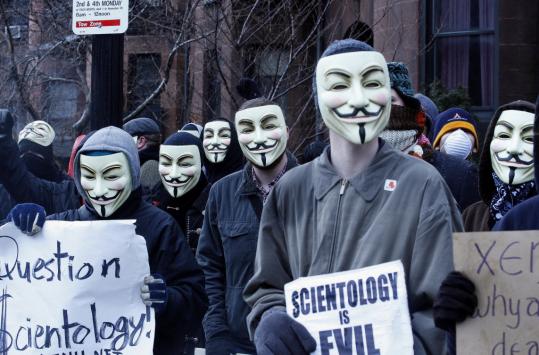 A group of more than 50 masked protesters gathered yesterday outside of the Church of Scientology of Boston headquarters on Beacon Street to demonstrate against the policies of the church. Protesters said the event was part of a worldwide demonstration against the church by Anonymous, an informal Internet-based group.

Donning Guy Fawkes masks modeled after those worn in the 2005 film "V for Vendetta," or face coverings improvised with T-shirts or scarves, participants began to assemble in front of the building at the corner of Beacon and Hereford streets around 11 a.m.

The story of Fawkes, an Englishman sentenced to death for attempting to blow up the House of Lords with kegs of gunpowder in 1605, was revived in the fictional "V for Vendetta," in which a crowd of people wear identical masks to challenge the government.

In a statement, the Church of Scientology of Boston said that Anonymous is "a group of cyberterrorists who hide their identities behind masks and computer anonymity" and target Scientology "for no reason other than religious bigotry."

Gerard Renna, director of the Church of Scientology of Boston, said in an interview yesterday that church services were not affected by the protest. Members of the church continued to enter through the front entrance as two Boston police officers stood outside the door. The church hired four officers for private details to ensure that parishioners and people in the neighborhood were safe, according to a Scientology spokesperson.

The group Anonymous has never protested in front of the Boston location before, Renna said.

The Detriot Free Press reported on its website that members of Anonymous protested in front of a Church of Scientology in Farmington Hills, Mich. About 200 protesters gathered outside a church in Clearwater, Fla., according to the Associated Press.

Nearly all Boston protesters interviewed said they did not know anyone else at the event, or know who was leading the group. "That's Anonymous. There is no hierarchy. Everyone is in charge of themselves," said a 20-year-old from Cape Cod who declined to give his name.

Five of six people interviewed refused to give their names, saying they feared retribution from Scientologists. One protester, Netanel Ganian, a 24-year-old student at Berklee College of Music, said he did not like some of Scientology's practices and defended Anonymous.

"It's a bunch of people. It's a convenient bubble to form under. There's no leader," he said.

Word about the event spread through online videos on YouTube, message boards, and websites critical of Scientology, protesters said.

The 20-year-old said he attended "to protest the greed of the church and how the church acts towards its members."

None of those interviewed said they knew why so many attendees were wearing the Fawkes mask.

"I can't say, not having contact with the inner circle - wherever they are," said one protester who declined to be named.

"But I can say the image of people marching towards Parliament in the spirit of protest, that wall of masks, had a certain resonance amongst those who held negative feelings about organizations such as Scientology but also towards the government."

No arrests were made in connection with the protest, according to Boston police.