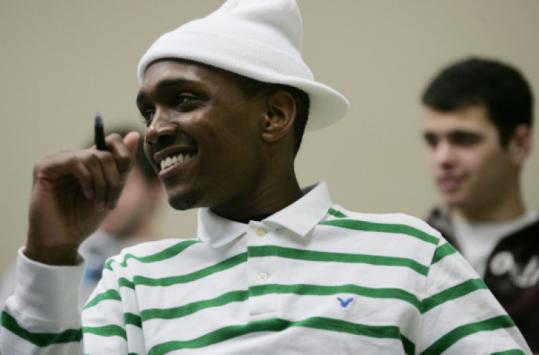 Two years ago, Marvin Burchall was working the lunch shift at a luxury beachside hotel in his native Bermuda when he waited on an administrator from Endicott College, just north of Boston. To him, Lynn Bak was just another customer, another tourist visiting the island getaway. But Burchall's service was impeccable, and his attentiveness and amiable manner caught Bak's eye.

Bak, who coordinates Endicott's School of International Education in Bermuda and stays at the Elbow Beach Bermuda resort every three weeks or so, gradually got to know Burchall, a 23-year-old who had dropped out of college during his sophomore year to work at the hotel.

The better she knew him, the more she was struck by his poise and potential, and she eventually recommended him to Endicott president Richard Wylie as an excellent candidate for Endicott. In October, Wylie wound up sitting in Burchall's section while in Bermuda for a graduation ceremony and was similarly impressed. In short order, Endicott offered Burchall a full, four-year scholarship, room and board included, which he eagerly accepted on the spot.

"How could I say no?" Burchall said of the highly unusual offer on his first day of classes last week at Endicott, where he plans to study hotel management. "I knew this was a once-in-a-lifetime chance for me. I knew I had to take this and run."

Burchall, an outgoing, well-met sort, said he is deeply grateful for the college's belief in him and said he continues to be stunned by the random chain of events that changed the course of his life.

"I had never heard of Endicott College, and now look where I'm sitting," he said at a student lounge between classes. "I was just doing my job. It's kind of surreal, really."

The college often recruits foreign students for its hospitality program to give the classes a more global perspective, Wylie said.

"He had a professionalism beyond his years," Wylie said. "You could tell right away this was a young man with a lot of potential and promise, and we thought that with an education he could do so much more."

Burchall, the second youngest of five children, had enrolled in Bermuda College after high school, but soon found himself bored with the insurance courses he was taking, and decided he'd rather give the hotel business a go. Working first as a housekeeper, then a waiter and assistant bartender, he eventually pulled down $700 a week.

Burchall was happy, but dreamed of running or even owning a hotel and knew he'd eventually have to return to school. And Bak brought up the issue as often as he refilled her water glass during her lunch meetings.

Burchall arrived in Boston recently with his father, and spent the first few days sightseeing and getting his dorm room set up. Buying warmer clothes is on his to-do list; the transition to New England weather has been tough, and he wears a warm winter hat even indoors.

"I've got to sacrifice our lovely sunny weather for four years," he said.

Burchall admits to some nervousness about starting classes, saying the scholarship carries a lot of pressure. But he said he will work hard and believes he'll do well once he gets his bearings.

Burchall's previous visits to the United States have been brief, but he said he wasn't too concerned about adjusting to a new culture. Working at the hotel, he met customers from all over the world, he said, and he prided himself on being able to talk to all sorts of people.

In some ways, Burchall said, he is ready for a clean slate. The last few years has brought some misfortune, he said. He was hospitalized for several weeks when he was struck from behind with a baseball bat in an unprovoked assault, and four years ago his mother died of brain cancer.