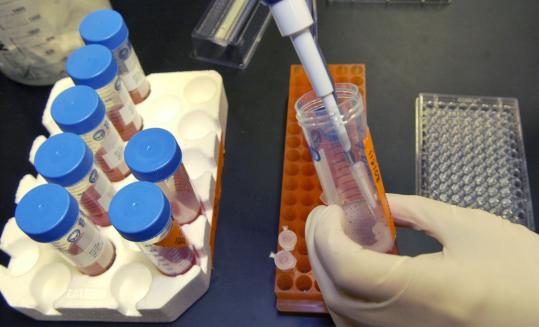 In a former hotel on Route 128, Cell Signaling Technology is creating hot jobs of the future.

Scientists are working to cure cancer, diabetes, and other life-threatening diseases. Antibodies manufactured at the laboratory are sold to Boston hospitals, drug companies, and other research facilities around the world. The biotechnology firm plans to hire 25 more employees this year, including jobs in research, sales, marketing, and support staff.

"We're not the biggest company, but we're growing," said Eric Scharf, director of marketing at the 10-year-old Danvers company that currently has 225 employees. "There are a lot of opportunities here."

The state Executive Office of Labor and Workforce Development reported last week that the state unemployment rate increased slightly - to 4.5 percent from 4.3 percent - last month, still below the national average of 5.0. Trends north of Boston, like the rest of the state, pinpoint areas where jobs are available, including high-tech, financial services, and healthcare.

But there are slowdowns elsewhere. Jobs in manufacturing, transportation, and construction have become harder to find, reflecting the ongoing national decline in retail sales and the slump in the housing market.

The national economy is flirting with recession, prompting a surprise interest-rate cut last week by the Federal Reserve Bank. A record number of foreclosures in Essex County, along with stagnant home sales, have combined to slow new home construction, a local builder said.

"We're not hiring right now because of everything that's going on with real estate," said Alan Berry, vice president of C.P. Berry Construction Co. in Topsfield, a high-end residential developer. "I kind of sense people are keeping busy doing smaller jobs, just trying to keep it going to get through this cycle."

As the economy battles headwinds, Cell Signaling and other life-science companies offer a safer harbor. Biotechnology, a sector now estimated to employ 3,400 in the region, is a fast-growing field that could become the next big generator of jobs.

"It's a highly skilled field," said Mary Sarris, executive director of the North Shore Workforce Investment Board, a regional job training agency in Salem. "The people who work in it are insanely bright. . . . It's an area that we believe will generate good, quality jobs."

In the Merrimack Valley, which has lost 10,000 manufacturing jobs since 2001, the buzz is about nanotechnology, the use of microscopic particles in manufacturing, which carries the promise of economic growth. The University of Massachusetts at Lowell, which is building an $80 million science center, is a major research center for the technology. The local employment board hopes to partner with the college to identify training needs for the future workforce.

"That's where the jobs of the future are going to be concentrated," said Fred Carberry, executive director of the Merrimack Valley Workforce Investment Board. "It holds the potential to have a positive effect on the entire Merrimack Valley."

Carberry said most of the manufacturing jobs lost this decade are because of the steady downsizing at the - telecommunications plant on the Haverhill-North Andover line. The plant, which now has just 500 employees remaining from a peak of 12,000, will close for good later this year and the jobs will be shipped to the company's other plants in Italy.

"We learned from the losses at Lucent that we need to diversify," Carberry said.

Healthcare, financial services, and education, staples of the economy north of Boston, are due to expand, even as the state's overall economy is expected to slow amid warnings of a national recession. "Those are strong areas," said John Bitner, chief economist at Eastern Bank, whose main office is in Lynn. "The North Shore's economy is diversified. There is a significant technology sector. It should be able to weather a slowdown."

Healthcare continues to offer job opportunities, including those in food services, record-keeping, and specialized nursing.

"Healthcare is where it's at," said Althea Lyons, vice president of human resources and development at Northeast Health Systems, parent of Beverly Hospital and Addison Gilbert Hospital in Gloucester. "For college students, especially, that's where they should be looking."

Northeast now has 180 job openings at its two main hospitals, plus a new outpatient center in Danvers. North Shore Medical Center in Salem, its biggest local competitor, has 200 job openings. In each case, specialized nurses, including those skilled in cardiac care and surgery, are the hardest to recruit.

"It all comes down to supply and demand," said Arthur Bowes, senior vice president of human resources at North Shore Medical, which has facilities in Danvers, Lynn, Peabody, and Salem. "There aren't as many qualified applicants. We're always looking for highly qualified people."

Despite jittery investors on Wall Street, financial services, including local banks and credit unions, are in expansion mode. Danversbank, which debuted on the Nasdaq stock exchange on Jan. 10, plans to invest some of the $171 million it raised in capital to expand its branch network in Essex and Middlesex counties, and possibly add new lines of business, such as insurance. "We're going to continue to build our infrastructure and leverage our new capital," said James McCarthy, chief operating officer of Danversbank.

Those job seekers who do not match up with the growth sectors will continue to struggle with finding good wages.

The housing slump could have a deep and lasting effect on consumer spending, Bitner said. "The consumer is somewhat shellshocked," he said. "The problems in real estate, and high energy costs, are a one-two punch. They're going to be pretty careful with their spending."

The retail sector shed 750 jobs in the North Shore Workforce area from 2001 to 2006, state data show. The losses may have been the result of the merger of Filene's and Macy's department stores.

There are some signs the retail decline may be slowing. NorthshoreMall in Peabody - the region's largest shopping center with 2,600 employees - expects to add 600 to 800 jobs by next year, when Nordstrom's is to open a new anchor store, while other stores expand. A Macy's Men's and Home Furnishings became the newest mall tenant last week when it opened at the former Lord & Taylor site. Other new tenants include Timberland, The , and a revitalized .

"Cashiers and sales workers aren't fast-growing jobs," said Eliot Winer, chief economist at the state Department of Employment and Training. "But they are generally large employers, with a consistent need for replacement workers. They create a lot of opportunities."