A capital idea for ailing icon? 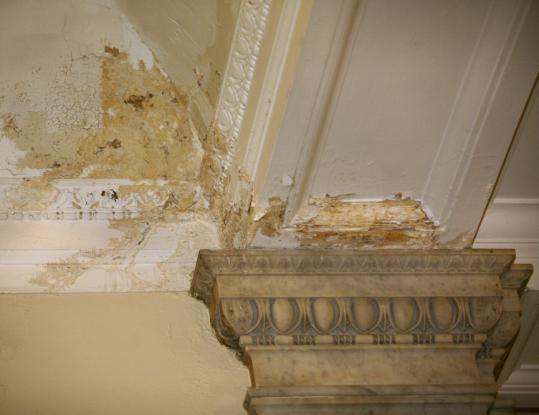 The State House in Boston is in need of repairs. Officials are considering using funding from private corporations as other states like Connecticut and Tennessee have done. (John Tlumacki/Globe Staff)
Email|Print| Text size – + By Lisa Wangsness and Andrea Estes Globe Staff / December 1, 2007

he Massachusetts State House, beset with moisture-ridden walls, cracked plaster, and leaky ceilings, needs a massive renovation in the next few years. But at a time when the budget barely covers basics like bridges, schools, and police officers, how can the state afford it?

Senate President Therese Murray is suggesting a new idea to raise money for the project: private donations. She says some corporate executives have suggested they would be willing to help pay for much-needed repairs to Beacon Hill's most venerated public building.

"I think it makes sense if you have people out there, corporations, or philanthropists, interested in doing this kind of thing and would liked to help us," she said. "We would certainly like them to help us."

Murray wants to work with the governor and the House to set up a commission to raise money for the project. At least 20 other states, including Colorado, Connecticut, and Tennessee, have accepted money from private corporations to help fund renovations for state buildings, according to Common Cause, a Washington, D.C.-based organization that tracks money in politics. The practice may raise ethical questions, however, said Mary Boyle, a spokeswoman for the group.

"When you start soliciting private donations, you're going to get companies and individuals who are looking to use this as an opportunity to gain access and influence," she said. "It raises the question: Are these people getting legislative or policy favors in return for the money they've given?"

A spokesman for Murray, David Falcone, said such public-private partnerships are commonplace and appropriate.

"It's an historic monument, really, and there certainly is reason to think there would be private entities interested in restoring and preserving a building like this which is really a national treasure," he said.

Aides to Governor Deval Patrick and House Speaker Salvatore F. DiMasi yesterday greeted the idea with interest, saying it seemed worth exploring, particularly given the state's fiscal situation. The state is looking at a budget gap of more than $1 billion next year, some analysts say.

Secretary of State William F. Galvin, who chairs the Massachusetts Historical Commission, also thought private contributions seemed reasonable, as long as the State House would not be defiled by tacky acknowledgements to its corporate sponsors, such as "a big sign in the Hall of Flags saying, 'Brought to you by Dunkin' Donuts.' "

"That would be a problem," he said. "A small, tasteful plaque would be all right."

State House leaders do not know how much money will be required to fix the 650,000-square-foot edifice, the oldest section of which was designed by Charles Bulfinch and completed in 1798. But the problems with the building are obvious to anyone who spends time there. Leaks have caused large chunks of ceilings to fall in numerous lawmakers' offices. Pillars and wall tiles in the Senate chamber are cracked, the result of moisture creeping into the walls. Frayed wires run along the baseboards of the governor's suite. Some offices are cramped, others are underused, and nicotine stains from years ago have darkened murals and frescoes.

"Looking around the State House building, the infrastructure needs are plainly visible," said Joe Landolfi, a spokesman for the governor.

One of the biggest problems is the leaky roof; the state will begin a two-year, $10.5 million project to replace it next spring, said Kevin Flanigan, a spokesman for the Division of Capital Asset Management. He said that money has been authorized.

The state also hired a consultant last year to do a comprehensive study of the building and create a multiyear, multimillion dollar plan to fix it. The plan was supposed to be finished last summer, but Flanigan said the complexity of the task delayed its completion; a draft - including an estimate of the price tag - should be finished by early next year, he said.

Ethical considerations aside, it remains unclear if corporations would be willing to pay for restoring the capital. Galvin said the state archives solicited private donations to pay for a permanent exhibition of founding documents, including the original state Constitution and Bill of Rights. But the money for the $2 million effort hasn't been pouring in, he said.

"We have a significant amount of money, but we're still short," he said.

Galvin added that it's not easy to raise corporate money these days, especially since many of the largest companies in the Boston area have left or been bought by larger out-of-state entities.

" just announced a five-year deal with Tanglewood," he said. "How many major donors are there left?"

Richard Norment, executive director of the Washington, D.C.-based National Council for Public-Private Partnerships, also doubted that corporations would participate if they received nothing but civic pride in return. In a true public-private partnership, he said, both sides take on risk in exchange for tangible benefits.

But Geoffrey Beckwith, executive director of the Massachusetts Municipal Association, said that for corporations and citizens alike, "there's a public and civic stake in having our public infrastructure, and symbols of our public government, be in fine shape, and in the condition worthy of the esteem we hold them in."