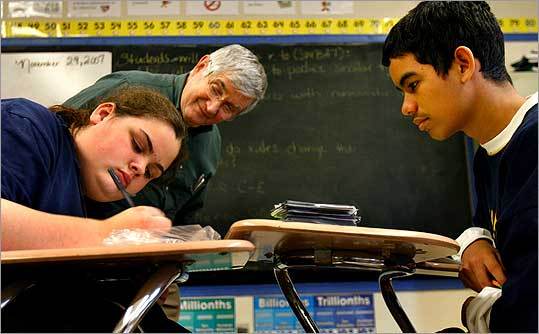 Last fall, 10 Massachusetts public schools embarked on an experiment: Lengthen the school day by at least 25 percent, give students extra doses of reading, writing, and math, and let teachers come up with creative ways to reinforce their lessons.

The extra time appears to be working.

As a whole, schools with longer days boosted students' MCAS scores in math, English, and science across all grade levels, according to a report to be released today. And they outpaced the state in increasing the percentage of students scoring in the two highest MCAS categories.

The data, to be presented at a national conference in Boston on expanded learning time, is the first comprehensive look at the effectiveness of extra time. The promising state test results show that a longer school day, with more opportunities for hands-on learning, has had a positive impact on student achievement, educators said.

"It's incredibly exciting and encouraging for those of us who've believed that this can work in standard public schools," said Chris Gabrieli, chairman of Massachusetts 2020, an educational nonprofit that partnered with the state Department of Education on the initiative. "This is a reform that can be widespread."

School systems across the country are watching Massachusetts, the first state to adopt and fund longer days in multiple districts. Leaders and educators in at least a dozen states - including New York and Rhode Island - are considering replicating the efforts. And US Senator Edward M. Kennedy is urging Congress to pass a bill that would make longer school days a key reform strategy, modeled after Massachusetts. The bill would give states and school systems across the country seed money to extend their days.

"These results show that expanding learning time pays off . . . and I look forward to expanding this success nationwide," Kennedy said in a written statement to the Globe.

The state has spent nearly $20 million implementing the program, at a cost of $1,300 per student. This fall, the number of schools with extended programs increased to 18, located in eight mostly low-income, low-performing, urban districts. An additional 33 schools in 16 districts hope to convert to longer days in fall 2008. And more than 100 schools, including those in suburbs such as Andover and Winthrop, are in the pipeline for lengthening their days in the next two years.

Schools have typically converted from a six-hour day - which some have written off as an antiquated schedule designed to meet the needs of farms and factories - to an eight- or nine-hour day.

During the longer days, students have more time to focus on the subjects they need the most help with and participate in arts and sports - extracurriculars principals say have been squeezed out in many schools because of the increased focus on testing and accountability. Teachers also get more time to meet as a team, discuss what and how they teach, and receive extra training.

Previously, a few charter schools and a handful of regular public schools had adopted longer school days - but this is the first comprehensive, state-funded effort to extend the day at Massachusetts schools.

Paul Reville, chairman of the state Board of Education, said the results are promising but cautioned that it's only one year's worth of data and that longer days may not be the panacea for all struggling schools. The state Education Department has commissioned its own three-year evaluation of the effectiveness of extending the school day, and expects to make a preliminary report on the first year of implementation in January.

"It's a very significant early signal that more time, used well, can make a big difference for students," Reville said. "But more time is a bit like more money. It doesn't have inherent value; it depends on how you use it."

At Clarence R. Edwards Middle School in Charlestown, which extended its school day by three hours, until 4:30 p.m., last year, all seventh- and eighth-graders spent an hour each day participating in a "math league." Students divided into teams and played games to practice skills learned in their math classes.

This year, the percentage of students achieving proficiency on the math MCAS rose 12.7 percentage points at that school, according to the Massachusetts 2020 analysis.

Dawn Oliver, a parent at Matthew J. Kuss Middle School in Fall River, said the extra time has allowed her daughter, Brittany, to grasp academic concepts because the teacher covers the material more thoroughly in class.

The longer day has also boosted the school's reputation, along with its test scores, said the principal, Nancy Mullen.

"Parents were running away when I got there," Mullen said. "Now they're calling us up wondering how they could get their children into our school."