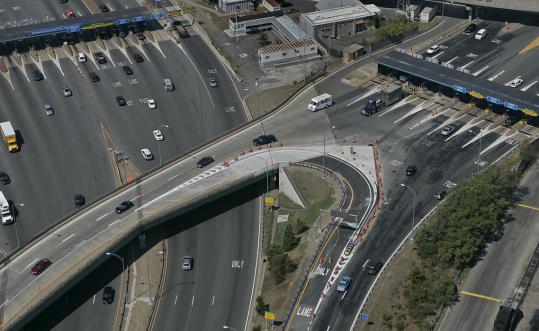 Fewer than 200 daily drivers use the ramp, a third of them illegally, according to turnpike sensors. That is a fraction of the 1,200 to 2,000 cars a day the ramp was to accommodate. (David L. Ryan/Globe Staff)
Email|Print| Text size – + By Noah Bierman Globe Staff / November 19, 2007

The Massachusetts Turnpike Authority's new $1.6 million U-turn ramp - celebrated as a major solution to the city's traffic congestion at its opening last month - has been used by just a trickle of drivers since the mayor and dignitaries took their inaugural spin.

Fewer than 200 drivers a day use the ramp, a third of them illegally, according to turnpike sensors that track vehicles, just a small fraction of the 1,200 to 2,000 vehicles a day it was intended to accommodate.

Yet Turnpike officials will still not allow all vehicles to use the ramp, which is now open only to taxicabs, buses, and other two- axle commercial vehicles with Fast Lane transponders. Cabbies pay a $2 toll. Bus drivers pay $3.

With the ramp's opening, those drivers can travel from the Back Bay to Logan International Airport or the Boston Convention & Exhibition Center or vice versa - without being forced to navigate busy city streets. They can take the turnpike westbound, loop around on the ramp just before the Allston tolls, and use east bound exits directly into the Back Bay and the South Boston waterfront area.

The ramp can trim 10 minutes off the trip in both directions, transportation planners have said, and ease congestion on local roads.

"The total number of vehicles using the U-turn ramp, as well as the number of violations, is nothing to boast about," said Mary Jane O'Meara, executive director of the Turnpike Authority, in a statement e-mailed to the Globe.

But O'Meara said a month is not enough time to render final judgment or to justify allowing all vehicles to use it.

But many Boston taxi drivers have been reluctant to take out-of-towners on the ramp, because they fear the passengers will not understand why they are going west then east as the meter ticks, and will think they are being overcharged.

"He passes the Copley Square area he's going to say: 'What's going on here?' " said John Ford, owner of City Cab and Top Cab. "Even though, technically, it may be a faster ride, people generally like the shortest point between two points when you're in a cab."

The passenger may be correct. A ride from Logan Airport to a Prudential Center hotel that might cost $28 when using city streets can cost $40 with the U-turn, said Marckinson Charles, president of Independent Taxi Association.

The restrictions on the U-turn ramp have been a source of confusion since its opening Oct. 13. A French Canadian trucker crashed into the side rail two days later. He said at the time that he believed the signs were indicating that he should make the U-turn as part of a detour.

In fact, his 18-wheel truck was too long to use the ramp, and he could not make the tight turn. A series of signs suggested that only two-axle trucks were permitted on the ramp, but he could not figure them out.

He wasn't the only one. After the accident, the Turnpike Authority redesigned signs leading up to the ramp to more clearly spell out who could use the ramp. Police still wrote 986 citations there Oct. 16-26, when regular patrols on the ramp ceased.

The tickets, $7 for drivers with transponders and $8 for those without one, will not affect drivers' records or insurance rates because they are not reported to the state's Registry of Motor Vehicles, said Mac Daniel, spokesman for the Turnpike Authority.

But police slowed traffic on the ramp and annoyed drivers who said they were being ticketed for a reasonable act of confusion.

Daniel said the 24-hour police patrols on the ramp were never intended to last more than two weeks. But, after seeing the number of people still using it illegally, Turnpike Authority managers will ask State Police to again beef up spot checks, he said.

Daniel said the authority has been cautious about opening the ramp to regular cars, in part because Turnpike Authority engineers never filed for review under the Massachusetts Environmental Policy Act.

If more than 3,000 vehicles per day use the ramp, he said, it could be subject to that requirement, which means engineers would have to draft a plan to minimize any environmental impact and hold a public hearing.

But neither Daniel nor Lisa Capone, press secretary for the Executive Office of Energy and Environmental Affairs, was able to say what, if any changes the authority would have to make in that case.

Jim Klocke, executive director of the Greater Boston Chamber of Commerce, which lobbied heavily for the ramp, said members remain happy it is open, though use is sparse. He believes it will take a year, possibly two, to learn whether the numbers justify letting more drivers use it.

"Public officials have said, 'We'll look at that question down the road a little bit' - no pun intended - and we think that's an appropriate strategy," he said.

, the cab company owner, said he has seen enough evidence: It's time to let the public use the ramp. "I'd like to use it myself," he said.