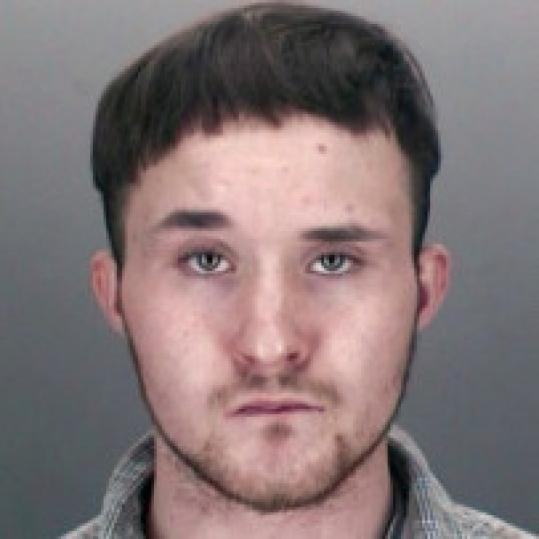 NORTH ANDOVER - Robert Hassam Jr. had been fired a week ago from the Independent Tire store. Police say he returned yesterday carrying guns.

As customers waited and mechanics worked, police said, Hassam, 25, walked through the front door and into a garage bay, where he started shooting at one of his former co-workers, Peter A. Mandeville, 33, of Methuen, who has a wife and 5-year-old son.

"He came in, and he didn't say anything; he just started shooting," said Lieutenant Paul Gallagher of the North Andover police.

Mandeville was struck three times before the gunman ran from the store, chasing two employees and shooting as he ran. The gunman then scaled a fence at nearby Lawrence Municipal Airport, ran across a runway, and fled into the woods, police said. He finally was subdued by a North Andover police dog.

Hassam was expected to stay overnight under police guard yesterday at Lawrence General Hospital, where he underwent surgery for dog bites, police said. An arraignment was expected today.

Mandeville suffered gunshot wounds to his hip, leg, and hand and was flown to a Boston hospital, police said. Police did not know his condition last night. There were no other injuries.

Gallagher said there had been tension between Hassam and Mandeville when Hassam worked at the store, but he did not know the nature of the dispute.

Police searched the area, forcing the Lawrence Municipal Airport, which is adjacent to the tire store, to close for about 45 minutes, said airport manager Michael P. Miller. The 500-acre airport does not handle commercial flights.

When North Andover police Sergeant Charles Gray and his police dog, Kyzer, came across the suspect, Gray ordered him to get on his knees, which he did, raising his hands.

But as other officers joined Gray, police said, Hassam lowered his hands and placed them on his waistband, prompting Gray to release the dog. The dog bit Hassam several times, subduing him and allowing police to arrest him. They recovered two handguns from his waistband, said Gallagher.

No one answered the door at Mandeville's Methuen home yesterday. Neighbors said the family moved in less than a year ago.

"They're just good neighbors," said Kim Quinn, who lives across the street. "We help each other plow the driveway. I'm glad to have them as neighbors. It's shocking."

"It's scary," said Chuck Scala, an employee of the tire shop who said he left work around 9:30 a.m. and returned around 11:30 to find police tape blocking the entrance. "It's a great place to work, nice people. It's always been harmony."

Scala, of Plaistow, N.H., said he has worked at Independent Tire for about five years doing building maintenance.

Bowen Jackson, a mechanic at Eagle Air Aviation, said dozens of area firefighters and police officers were at the airport at the time of the shooting, demonstrating aircraft rescue techniques.

Gallagher said he did not know whether any personnel involved in the training at the airport participated in the search for the suspect.

"That's exactly what we use him for," said Gray, who keeps the dog at home.