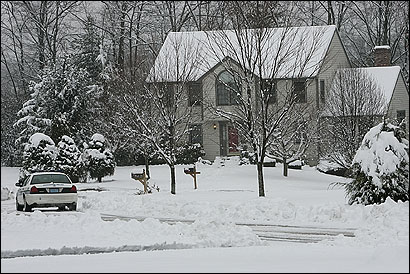 Hopkinton woman and infant are shot

HOPKINTON -- A woman and her 9-month-old daughter were found dead, fully clothed under a pile of blankets on a bed in their home Sunday, triggering a police search yesterday for the woman's missing husband as a ''person of interest."

Middlesex District Attorney Martha Coakley said yesterday that Neil Entwistle, 27, an unemployed computer technician, is being sought for questioning in the shootings of Rachel Entwistle, 27, and their daughter, Lillian.

The apparent homicides, the first in this rural town in more than a decade, do not appear to have been random, said Coakley, who declined to call Neil Entwistle a suspect.

''As we always look at family and friends, he is a person of interest to us," Coakley said.

The bodies were found at 6:30 p.m. Sunday when police entered the five-bedroom Colonial-style residence on Cubs Path, a wooded cul-de-sac, to check on the family. The doors were locked, and there were no signs of forced entry, police said.

Relatives and friends had gone to the house Saturday for a dinner party, received no answer when they knocked, and alerted police the next day. ''We can speculate that, as of Saturday, they were probably dead when people showed up at the home," Coakley said during an afternoon press conference.

Police initially believed that the pair might have died from carbon monoxide poisoning, because officers did not immediately find any signs of foul play. ''There was very little blood," Coakley said.

However, when the medical examiner arrived to remove the bodies, wounds were discovered from a single, small-caliber bullet that apparently had passed through the torsos of both victims. Autopsy results are expected today, police said.

Police are tracking leads in their search for Neil Entwistle, who they said has been traveling since Friday and might be driving a BMW, Coakley said. Relatives told police they last spoke with Rachel Entwistle on Thursday.

The Entwistles moved to Hopkinton, where they signed a short-term lease, from Southeastern Massachusetts, police said. A person who answered the door at the home of Rachel's mother, Priscilla Matterazzo, in Carver declined to answer questions about the slayings.

Rachel Entwistle, who attended Silver Lake Regional High School in Kingston, was a 2001 graduate of the College of the Holy Cross in Worcester. She met her future husband when she spent her junior year in college in England, according to the mother of a close friend of Rachel. The couple married in August 2003, had Lillian in April 2005, and baptized her last month, said the woman, who asked not to be named because she said she wanted to respect the victim's family.

The woman said she was impressed by the way Neil Entwistle cared for his wife and his daughter when they visited her home during Christmas. ''He seemed like a loving father and husband," said the woman. ''I can't believe Neil would do anything to his daughter or wife. But I don't know."

Investigators said they have no evidence that the Entwistles had marital difficulties. Neither had been arrested in Massachusetts, nor had records of restraining orders, Coakley said.

Neil Entwistle had moved to Hopkinton, a rural town of 14,000 near the juncture of the Massachusetts Turnpike and Interstate 495, to search for work among the many high-technology companies in the area, police said. He apparently had scheduled several job interviews.

Rachel Entwistle had worked as a teacher, but was staying home with her daughter, police said.

In Hopkinton, in shops along Main Street, residents watched television and listened to the radio yesterday for updates on the slayings.

''It absolutely doesn't fit the community, not that a double-murder fits in any community," said John Hankard, 46. ''This would be the last place that anyone who knows the town would ever think this would happen."

''This is a quiet, professional neighborhood of working families and schoolchildren that we would normally consider as safe," Hopkinton Police Chief Thomas Irvin said. ''There is no reason for anyone to fear there will be a repetition of this."

''I didn't even know they had the baby," said one neighbor, who asked that her name not be published because she feared for her life. ''I just saw the door open, lights coming on, going off. . . . We never saw them."

The neighbor said that police flooded the neighborhood Sunday night and into yesterday morning and that the presence of so many police cruisers upset her children. ''I'm just creeped out by this," she said.

In Carver, Elizabeth A. Mahoney, who lives near Rachel Entwistle's mother, said she had never been introduced to the couple, but believes she saw them beginning last summer when she noticed an infant being cared for at her neighbor's home.

Mahoney said she would often see Rachel and the man she believes to have been her husband taking the child for walks in the neighborhood, trying to soothe the crying baby.

''The baby was cute," Mahoney said.

Mahoney said she was shocked to learn of the killings. ''I didn't think there was anything wrong," she said. ''They seemed like a normal family."