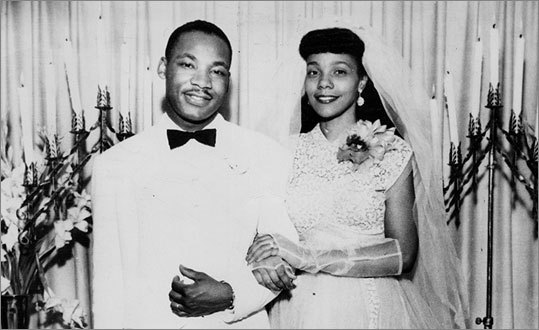 From the outside, Maria Dominguez's apartment building on the Roxbury/South End line looks just like every other one on the block. The three-story red brick row house, with its rounded English-style bow front, overlooks Massachusetts Avenue, its first-floor windows just a few feet up from street level. Without the address numbers affixed above the entrances, it would be easy to confuse the many doorways lining this block. But unlike her neighbors' homes, Dominguez's building has another distinguishing feature: a small plaque on the facade that reads, "This house, built in 1884, was home to Martin Luther King Jr. in 1952-53 while he was enrolled in the Graduate School of Boston University."

"We were so surprised to find this out - it was very humbling," said Dominguez, who has lived at 397 Massachusetts Ave. since September with her boyfriend. The first-floor apartment they rent is now one of several within the building, though when King lived there, it was likely a boarding house rented by the room.

"I knew Dr. King lived on this street, and that Malcolm X and other activists all lived around here at some point, but I had no idea it was here until we decided to move in. There's nothing really big commemorating this house - the plaque is barely noticeable. It seems like this place should be a more noticeable landmark."

Dominguez, director of the Phillips Brooks House, a student-run service organization based at Harvard University, is herself an activist, who has been working with youth in the immediate area and throughout the city for the past 10 years.

"I imagine the area has changed a lot since [King] was here," she said. "I know the building's been redone since the '50s, and a lot of the places that characterized this neighborhood are gone. But I think King would be interested to see his old neighborhood today. It's very diverse, and there is a unique tradition of activism here in the South End that's in line with his philosophies."

Though King lived for several years in the area, first at 397 Massachusetts Ave. and then in an apartment on nearby St. Botolph Street, he was not particularly active in the neighborhood.

While he was involved with Boston University campus activities, and several churches in the city, particularly the Twelfth Baptist Church in Roxbury, he was not a visible leader in the immediate area. 'A bit of a playboy'.

"People often don't remember that King was in Boston because he wasn't yet the famous Dr. King when he was here," said John Cartwright, the Martin Luther King Jr. professor emeritus of social ethics at Boston University and a contemporary of King's as a graduate student in the 1950s. "He was a struggling doctoral student who was a normal guy - even a bit of a playboy. He joked around, he dated - he was a man about town with a new Chevy."

In an interview with the Globe, Coretta Scott King recalled her hesitancy when a classmate first urged her to meet him.

"I had already heard about him through her, though when she said 'minister,' I wasn't interested," said Coretta.

But Cartwright was also quick to point out that just because King was not the political or civil rights activist he would later become, it doesn't mean Boston didn't have a profound effect upon him - or he upon Boston.

"While at Boston University, King was exposed to several very important things, all of which contributed to making him what he would become," said Cartwright. "For instance, it was here that he really embraced the teachings of Gandhi and the principles of nonviolence - an idea that was, at that time, unheard of as a formal ideological concept." King would later espouse and help implement these principles in his preaching and his legendary civil rights activism throughout the country.

Howard Thurman, who was dean of Marsh Chapel in the 1950s, one of the first black men to be appointed to such a position on a predominantly white campus, was also a mystic who had gone to India on a goodwill mission in the '30s and had met Gandhi. When King arrived in Boston, Thurman, who was a friend of the young scholar's parents, took King under his wing, becoming both a role model and a friend.

"The Thurmans really valued him. In fact, before he left BU, they invited him to be Howard's successor in the Church for Fellowship that Thurman had founded out in California," said George Makeachnie, the Sargent College dean emeritus and former director of the Howard Thurman Center at Boston University.

"But he'd already signed up to go to the Dexter Church in Montgomery. My wife and I always wondered just what would have happened to the civil rights movement if in fact he'd gone."

King had first learned of Gandhi's teachings years before coming to BU, when he attended a speech by Mordecai Johnson, the president of Howard University, while King was still a young man in seminary. According to Cartwright, King left the speech spellbound, thinking that he had found a way to bring about a social change in a peaceful, loving way.

"But the truth is, ironically, it was Thurman who introduced the concepts to Johnson," Cartwright said. "Thurman introduced Gandhi to many critical thinkers, but it was King who absorbed them and made them accessible to the people as a tactical means, as a way to meet the challenges before us."

Another one of Boston's contributions to King's development was his introduction to his future wife, Coretta Scott.

"I can't tell you how quickly we all found the New England Conservatory of Music," said Cartwright. "We'd never seen so many talented women in one place. But I must tell you, if King hadn't met Coretta, I don't think his life would have been what it was," said Cartwright.

"I've laughed with Coretta and counted up the different stories we've seen printed about how she and Martin met," said Myra McAdoo, who at age 73 has been a lifelong resident of the Boston area. "I think at one point we came up with as many as 14." 'A very progressive area'.

But perhaps one of Boston's greatest contributions to King - and its most difficult to quantify - is the influence of the city itself. In the 1950s, the intersection of Massachusetts and Columbus avenues where King lived was the heart of a vibrant black community filled with renowned jazz clubs, pool halls, and restaurants. Here, well-dressed patrons, black and white, arrived night after night, hopping from club to club to hear world-class music.

"The South End was a different place back then, I must admit," said McAdoo, who, like King, lived in the area during the '50s. "You had Wally's [which remains today at 427 Massachusetts Avenue], you had Slades', the Savoy, and the beautiful art deco Hi-Hat jazz club right on the corner. Everyone came there - Count Basie, Duke Ellington, everyone - and people of all backgrounds came from everywhere to hear them. It was, actually, a very progressive area."

"That part of the South End community hadn't changed much since the beginning of the century," said state Representative Byron Rushing, the former director of the Museum of Afro-American History in Boston. "At the turn of the century, the African-American population began to grow. This reflected a national trend, but also a local one - a large group of black people came there from Beacon Hill, as well as from throughout the area because of the jobs at the railroads right there near Mass. Ave."

But as the numbers increased, area construction did not, and affordable, quality housing could not match the demand for it. As a solution, in the late '50s and '60s, city officials began to implement plans for redevelopment, and many longtime South End residents lost their homes to new revenue-building projects, and then found themselves priced out of the neighborhood.

Today, with the exception of Wally's, all of the jazz clubs are gone, replaced by modern storefronts and rede veloped buildings. "There are a few of us longtime businesses still here," said Darryl Settles, who has owned the soul food restaurant Bob the Chef's (at 614 Columbus Ave.) since 1990. "We've been around since the '50s, and Charlie's down on Columbus and Wally's on Mass. Ave. have been here even longer. It's a much more diverse neighborhood now than it was, and that's a good thing. But we've all seen this place change, even over the last 10 years. When I first took over this place in the '90s, there were only two restaurants between us and Charlie's at the other end of Columbus. Now there are at least eight. Basically, there's a lot more people with money coming into the area."

For the neighborhood, these changes in the community have become some of the most divisive issues, often pitting city officials against local activists protesting gentrification, redevelopment, and the displacement of lower-income residents.

Though King never directly participated in such political efforts when he lived here, it is in this activism that Martin Luther King Jr.'s influence is now most evident. With its strong sense of community and many nonviolent protests, the South End has fought to keep its destiny in its own hands, using as its guiding principles the means and philosophies King espoused so eloquently during the civil rights movement.

"Just walk around the neighborhood and you can see evidence of activism," said Liz Miranda, the youth director of My Town tours, an organization that trains high school students to lead historic tours of the South End. "The Southwest Corridor Park that goes from Back Bay T to Forest Hills, for instance. That was supposed to be an eight- to 12-lane highway, but residents fought it for over 10 years."

"Or look at all the community-controlled housing developments here," said 15-year-old Alyssa Arzola, a youth guide for My Town. "If local activists hadn't stood up to the government and fought the fights they did against redevelopment in the '60s and '70s, there would be no more affordable housing left in the South End."

As a resident of Methunion Manor - one of several community-controlled housing developments in the South End created in the '60s and '70s - Arzola said she knows she is the direct beneficiary of those struggles.

Aside from the Martin Luther King Jr. residence, the Tenants Development Corp. now controls more than 344 other units designated for low- to moderate-income tenants, all in the immediate area.

"I think it's fitting that the TDC owns this apartment," Dominguez said. "King would be proud of the nonviolent struggles this community has gone through to stabilize and maintain itself in this neighborhood. I think he would be proud of its success."