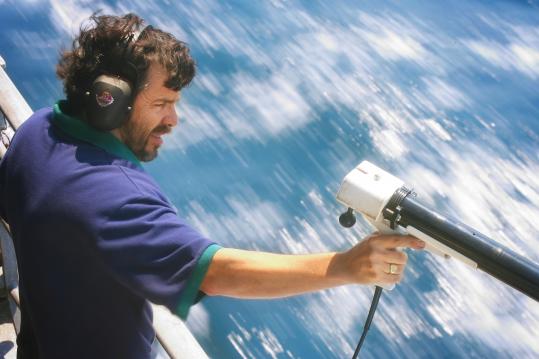 Increased rainfall in New England over recent years has sent a surge of sediment into the Gulf of Maine, producing a vast, cloudy film across much of the ocean that threatens the microscopic, single-celled plants that form the foundation of the marine food chain, according to a new study.

Researchers at Bigelow Laboratory for Ocean Sciences in Maine and the US Geological Survey found significant changes in the Gulf of Maine ecosystem, which they linked to record rains in the past seven years in Maine and the resulting greater volumes of water from local rivers.

About 4.5 feet of rain fell over those years on average, about a foot more than the average annual rainfall over the past century, and the scientists attributed the increase to climate change. More precipitation is predicted as one result of warming temperatures in New England.

In a study published this month in the Marine Ecology Progress Series, the scientists documented a five-fold decline in the growth rate of phytoplankton, the single-celled plants that support life throughout the region’s waters, including everything from lobster to cod.

“The Gulf of Maine has been the recipient of extraordinary amounts of runoff from land over the past few years,” said Barney Balch, a senior research scientist at Bigelow and lead author of the study. “While the reasons for this dramatic decrease in marine primary production are complex, the ramifications are not particularly complicated.”

The researchers said it could take years before the decline in phytoplankton affects the supply of commercial fish species, because the plants serve as food for larval fish.

They said increased amounts of river water flowing into the ocean appears to be blocking deep, North Atlantic water, which carries silicate and other nutrients essential for phytoplankton growth, from entering the Gulf of Maine. The additional fresh water has also led to an increase in the amount of detritus and organic matter in the water, reducing the amount of light available for phytoplankton photosynthesis and growth.

“You can’t drop the primary production of an ecosystem by a factor of five and not have an impact on other parts of the marine food web that depend on it,” Balch said.

The study also found small increases in surface temperature in the gulf, as well as decreases in salinity, compared with measurements taken 35 years ago.

The scientists said that the increase in temperature was consistent with global increases in ocean temperatures, but that the decrease in salinity is greater than changes observed elsewhere in the mid-Atlantic, presumably because of the gulf’s proximity to freshwater river sources.

They said long-term salinity decreases can be caused by changes in ocean currents and the melting of polar ice.

Jake Kritzer, a senior scientist and director of spatial management at the Environmental Defense Fund in Boston, said the study could affect future assessments of fish stocks.

“The study by Dr. Balch and his colleagues provides one of the most compelling arguments that systematic climatic and oceanographic changes are fundamentally altering the very basis of the ocean food web, very likely beyond the capacity of assessment models trying to capture dynamics spanning many decades,” said Kritzer, who did not take part in the study.

He added: “Most stock assessment models assume more or less static environmental conditions and demography of the target stocks over the years covered by the assessment. However, more and more we are learning just how tenuous that assumption might be.”

Peter Shelley, senior counsel at the Conservation Law Foundation in Boston, called the findings “jaw dropping in terms of its implications.”

He said the findings of the study are consistent with observations of other scientists.