1 dead in crash of train, truck in Maine 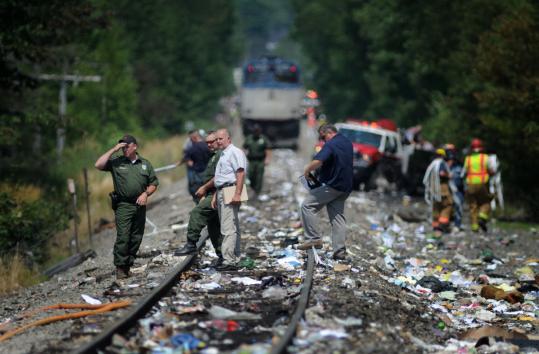 Trash was strewn over the tracks as investigators pored over the scene after a truck was struck by an Amtrak passenger train yesterday in North Berwick, Maine. (Photo by Fred Field)
By John M. Guilfoil and Martine Powers Globe Staff | Globe Correspondent / July 12, 2011

NORTH BERWICK, Maine - An Amtrak Downeaster train crashed into a trash-hauling truck that had gone past a crossing gate yesterday, causing a fiery wreck that killed the truck driver and injured some passengers on the Portland-bound train.

North Berwick Town Manager Dwayne Morin said yesterday that the crash of Train 681 occurred at the railroad crossing at Elm Street, which is also Route 4, in the southern Maine town around 11 a.m.

Maine State Police spokesman Steve McCausland said the tractor-trailer truck’s driver, who was not named, was killed. Three passengers were transported to Goodall Hospital in Sanford, said Stephen Peasley, police chief in North Berwick. Two had smoke inhalation, and one had a head injury. They were treated and released, said Kristen Hill, a hospital spokeswoman.

Train passenger Mark Monti, 51, of Cambridge, Mass., said he was headed for a day on the beach when he heard the train whistle sound and then felt the impact of the crash.

“I felt a big hard jolt, but it was nothing that would throw people all over,’’ Monti said. “After we heard the impact, everyone was a bit shaken.’’

When police arrived at the scene, the truck’s trailer was enveloped in flames and black smoke, lying on its side in a ditch, next to the tracks. The cab was in pieces. Trash was strewn about the tracks.

Peasley said the railroad gate was lowered and the warning lights were flashing before the collision occurred at 11:50 a.m. Authorities found skid marks on the road that might have been from the truck, Peasley said. Witnesses reported hearing the sound of skidding wheels and the train blaring its horn.

Peasley said the investigation so far shows that the truck went thorough the gate and that the passenger side of the truck’s cab was struck by the train. The train continued to travel for about a quarter-mile, stopping just short of the next crossing on Main Street in North Berwick.

The driver of the truck, whose name was not released yesterday, was ejected from the cab and killed, police said. It was not known if he was wearing a seat belt.

Amtrak and State Police said 109 passengers were on board the train.

The crash created a fireball, left trash and debris all over the roadway, and sparked fires on the road and in nearby yards, witnesses said.

The railroad crossing where the collision occurred is in a rural neighborhood, surrounded by fields and rustic barnstyle homes with neat lawns.

Mollie Gandy, 25, lives in a white house next to the train intersection; she has a wooden sign saying “Railroad Crossing’’ above her door. She said she had just finished eating breakfast with her two children when she heard a loud crash.

“It was a huge bang,’’ said Gandy, who has lived in the house for a year and a half. “Our tree was struck by lightning a little while ago, but this was way more intense.’’

Her dogs started howling. When she looked out her window, she saw the truck enveloped in fire, black smoke streaming into the sky. Neighbors began to run over and call 911.

Dawn Belanger, 46, lives a few blocks from the crossing and heard the crash. She and her son ran down the road when they heard the sirens.

“There was trash everywhere,’’ she said. “You couldn’t see much because of the smoke.’’

Peasley, who has worked for New Berwick police for 25 years, said he did not recall having a train crash in town before.

Josh Pickett, 30, of Sanford, was heading to work at his job at an Internet company when he arrived at the rail crossing to find destruction everywhere.

“There were no police officers there yet,’’ Pickett said. “There was just a lot of big popping and plumes of smoke and then more pops. You could see the fires spreading around people’s yards. There were little fires in different areas and smoke for 50 yards. And where the road crossing was, there was debris and garbage and stuff kind of exploded all over.’’

Pickett said he could barely make out the remains of the truck.

“You couldn’t necessarily see it,’’ he said. “The truck was so far gone. It was decimated. It seemed really surreal.’’

Patrick Raftery, 47, an attorney who lives about a quarter-mile from the crash, said the engine, which had separated from the rest of the train, came to a stop at the end of his street.

“I was the first person to the end of Partridge Lane,’’ Raftery said. “There the engine was burning. The rest of the train was about 100 yards south of the engine and charred but not burning. [There] weren’t even any sirens yet, till a minute or two. I ran home and told my wife.’’

Raftery said the smoke and fire rose more than 100 feet in the air.

The Downeaster is Amtrak’s connection between Portland and Boston. Amtrak said the crash disrupted Downeaster service and that alternative transportation was being arranged for the passengers on Train 681.

Monti, the passenger, said the train’s crew worked quickly to explain what had happened and keep people calm. He said the accident does not make him scared to take trains in future.