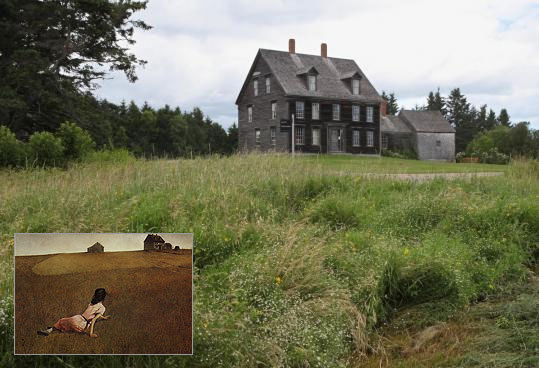 The fishermen of tiny Cushing, Maine, pass the old Olson house at least every other day, but few of them give the weather-worn 18th-century home a second thought as they head to the wharf. In Cushing, population 1,400, it has always been part of the family.

But now, the locals might have to navigate through even more tourists who visit the classic Maine farmhouse, made famous in “Christina’s World,’’ the iconic 1948 painting by Andrew Wyeth.

The US Department of the Interior has declared the house a National Historic Landmark, a designation reserved for places that “possess exceptional value or quality in illustrating or interpreting the heritage of the United States,’’ according to the department.

That quality has been apparent since Wyeth caused a sensation with his evocative artwork that features the farmhouse. In the painting, a disabled woman, her legs immobile on a grass field, bends inscrutably toward the building.

The scene, one of yearning and mystery, prompted questions, sympathy, and intro spection. What is the woman seeking? Why is the farmhouse important? What is this world that Christina inhabits?

When the public learned that Christina Olson, the subject of the artwork, had lost the use of her legs, and that Wyeth had been inspired by watching her drag herself across the field, its fascination deepened. The painting now hangs in the Museum of Modern Art in New York.

“This nondescript saltwater farmhouse and its connecting structure has become one of the most recognized images in American art,’’ said Christopher Brownawell, executive director of the Farnsworth Art Museum in nearby Rockland, which owns the property and provides tours. “It just clicked from the very beginning. There’s something about it. There’s this mystique.’’

Fewer than 2,500 National Historic Landmarks have been recognized in the country and fewer than 50 in Maine. The designation, Brownawell said, means “the house will stand in perpetuity and remain one of Maine’s iconic structures.’’

Landmark status does not prevent changes to the farmhouse, built on Maine’s midcoast by a sea captain and later expanded, if federal funding or permits are not involved. But Brownawell said the museum, which received the property as a gift 20 years ago, is intent on preserving this thought-provoking piece of old Maine.

For Earle Shettleworth, the Maine state historian, the house and painting speak to the state’s character.

“The weather-beaten house by the coast is a symbol of both the strength and rusticity of Maine,’’ Shettleworth said. “But more important, I think, is the human element of the painting. You have in the foreground, Christina Olson, who was a woman of great courage and independence. I think that many people identified, and still do, with the message of her life.’’

Wyeth spent 30 summers in Cushing and became close to his neighbors, Christina and her brother, Alvaro, who shared the house near the St. George River and Muscongus Bay. Wyeth, who died in 2009 at age 91, is buried on the old Olson property.

“That relationship, it was sort of a love story,’’ Brownawell said of the painter’s affection for the Olsons. “Wyeth had such deep respect for their way of life and who they were as people.’’

Christina, who died in 1968 only one month after Alvaro, lived a full life because of the care and support she received from her brother, Brownawell said. Like many Mainers, he worked several jobs to piece together a living.

“It was a very tough existence,’’ Brownawell said. “The Olsons burned through 11 to 12 cords of wood per winter. You can appreciate the energy efficiency: At best, on the coldest days, they were fortunate to get it above 40 degrees.’’

Alton Grover, the Cushing selectmen chairman, recalled Wyeth as a “wicked nice guy.’’ The artist spent much of his summers on his work, Grover said, but ventured into town to shop at the store.

That work involved meticulous preparation, Brownawell said. “It was fascinating how much time he spent on the positioning, and the respect he had for Christina in making sure it was respectful and very thoughtfully done,’’ he said.

To showcase that respect, the Farnsworth Art Museum is holding an exhibition through October of 50 watercolors and drawings by Wyeth involving the Olsons, including a dozen preliminary sketches for “Christina’s World.’’

Grover, 62, was surprised by the home’s new landmark status.

“I didn’t know it was going to happen,’’ Grover said. “I’ve never thought much about it. I’ve just lived here every day. All the people who don’t live here want to see it, though.’’

Those people come from all over, Grover said, in buses and cars with far-flung license plates that tell the townspeople how well known their village has become.

“You can see them come from everywhere,’’ Grover said. “For that old of a house, it’s in real good shape.’’

Brian MacQuarrie can be reached at macquarrie@globe.com