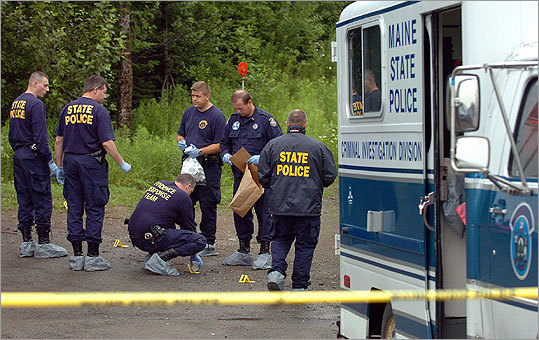 AMITY, Maine — Even for northern Maine, this 200-person town is remote, just a smattering of small, secluded homes in the woods a few miles from the Canadian border.

A mobile home just off Route 1 here was the grisly scene of a mysterious triple murder Wednesday that has deeply unnerved residents and put authorities across the state on high alert.

Two men and a 10-year-old boy were found stabbed to death late Wednesday, and authorities embarked on an intensive search for a blue-and- silver pickup truck stolen from the home. They believe the killer escaped in it, and are warning that the driver could be dangerous.

“We would not invite anyone to approach the driver,’’ said Steve McCausland, spokesman for the Maine State Police. “If you see the truck, call police.’’

Police have notified law enforcement across the state and in Canada to be on the lookout for the vehicle, and have also contacted border officials and the National Crime Information Center. They also called on the public to keep a close watch.

“The public are going to solve this case with their willingness to get involved,’’ said Lieutenant Gary W. Wright, a criminal investigator with the State Police. “That will make the difference in this investigation.’’

Authorities would not disclose whether they had identified any potential suspects, but acknowledged that the driver of the truck could be anywhere.

The bodies of Jeff Ryan, 55, his son Jesse, who recently completed the fourth grade, and Jason Dehahn, 30, were discovered by a relative Wednesday evening, at least 15 hours after the slayings, police said. Ryan and his son lived in the trailer, while Dehahn, a friend of Ryan’s, lived nearby.

Residents said they are baffled by the brutal crimes, describing Ryan as a recluse who rarely interacted with others and had no known enemies. Police declined to speculate on motives and said they were investigating accusations from Ryan’s former wife that he sold prescription pain-killers from his home.

The savagery of the killings has rattled residents, and many sought explanations. Some speculated about motives. A number of others recalled a deadly home invasion in Mont Vernon, N.H. last fall, in which a woman and her young daughter were attacked at random. In Amity, a town of dirt roads and no traffic lights where few lock their doors, some feared the victims could have been chosen, like the Mont Vernon victims, simply for their isolation.

“Everyone is very sad, but also very on edge,’’ said Joy Strout, a 61-year-old neighbor who had known the Ryans for years. “It’s a scary situation, and no one knows what to think.

Strout’s daughter, Tamara Strout, was once involved with Ryan, and together the couple have a daughter, now 16. She and Ryan had recently started seeing each other again, Tamara said.

“I did love him,’’ she said, her voice wavering with emotion. “He was a very good father. He lived and breathed Jesse.’’

Tamara Strout described Jesse as a vibrant, fun-loving boy who just days earlier had come from his mother’s home in Lewiston.

Joy Strout said Ryan was a Vietnam veteran who was disabled in the military and no longer worked. He mostly stayed at home, she and her mother said.

“I’ve known him more than 20 years, and he was very set in his ways,’’ Joy Strout said. “He was eccentric, I guess you’d say. He lived his life the way he wanted to live his life.’’

Earlene Merrill, Jesse Ryan’s aunt, recalled her nephew as a sweet boy who was “so full of life.’’ He loved to hunt and fish with his father, she said, and explore the woods.

Jeff Ryan was a good man who would “give you the shirt off his back,’’ she said.

Mary Harbison, vice principal of Mill Pond School in nearby Hodgdon, where Jesse attended, recalled him as “a bright young man.’’

“His parents had a lot of hopes and dreams for his future and they worked hard with the school to bring the best out of him,’’ she said.

Police said a relative of Dehahn discovered the bodies and called 911. Police would not provide details of the crime, and declined to comment on whether the two adult victims had criminal histories.

Yesterday, investigators continued to scour the crime scene for evidence, and medical examiners were slated to conduct autopsies on the victims. Police have received some 30 reports of the wanted vehicle, but none had been confirmed.