Maine blazes a trail in funding 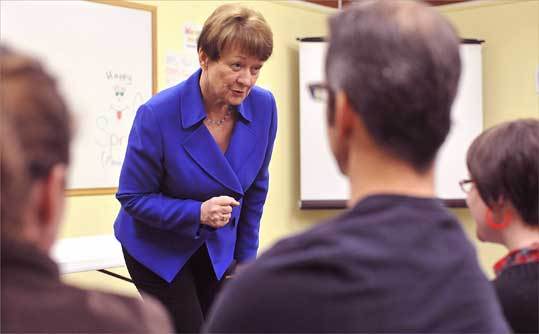 BANGOR — Gubernatorial candidate Libby Mitchell ended a recent hourlong evening appearance before the local gay community the same way she ends nearly every campaign event on her schedule. She did not ask her audience members for their vote, their volunteer time, or as much money as they were able to spare.

Instead, she wanted exactly $5, no more, no less, payable only by a certified financial document. Checks could be written not to her campaign fund but to a government account in Augusta. Those who wanted to pay with cash could purchase a prepaid post office money order from a stack Mitchell keeps in her gray leather purse.

One attendee peeled four crumpled dollar bills from his wallet and scrambled through the drizzly night to fetch the rest in quarters from his car.

Mitchell is one of four gubernatorial candidates in Maine racing to collect 3,250 of those $5 contributions to qualify for a clean elections program that has become a model nationwide. Candidates who meet Thursday’s deadline will become eligible for between $400,000 and $1.8 million in public funds but will be prohibited from accepting other contributions for the rest of the campaign.

A system created to banish big money from politics has created a class of candidates who must first fixate on small money. Those who choose to “run clean,’’ as Mainers call it, say that their top priority early in the campaign is reaching that $16,250 goal. It is a sum that candidates elsewhere can pull in during a single phone call or the first moments of a cocktail reception, but here it requires months, accumulated in bake-sale increments.

“If I qualify, there will be no more fund-raising and I will spend every waking hour campaigning around the state,’’ Mitchell, a Democrat who serves as state Senate president, promised the dozen attendees in Bangor. “I’ll never ask again. When you see me coming, you won’t have to run.’’

Maine’s system has gained in popularity since its introduction in 2000, with more than 80 percent of legislative candidates now participating. The system extends to gubernatorial candidates but not to congressional seats. This year, Maine could have two major-party nominees for governor relying only on public funds for the first time.

The program, approved by voters in a 1996 referendum, has inspired other states. This year, Connecticut will for the first time make a robust public financing plan available to its gubernatorial candidates. (Massachusetts voters approved a public financing plan in a 1998 referendum, but legal and political machinations killed it.) A bill to create a federal program has 151 House sponsors.

“They have probably the strongest program in the country,’’ Arn Pearson, a vice president of the voter advocacy group Common Cause, said of Maine. “Maine has a pretty good tradition of innovative policy and civility, and both parties, candidates, and the public have nurtured it and improved it.’’

Campaigns can finance their small-dollar fund-raising operation by collecting up to $200,000 in “seed money’’ from contributions of $100 or less but have to shut down the account at the time they qualify for public money.

Candidates who run clean will then receive a lump-sum payment of $400,000 for the June primary, with the opportunity to receive $200,000 more if they face high-spending adversaries. (Five Democrats and seven Republicans have qualified for the ballot, and they face at least one serious independent contender in the fall.)

If he or she wins the nomination, the candidate running clean receives another $600,000 for the general election and up to $600,000 in further funds if he or she faces excessive spending by the opposition — either a rival candidate, party, or political action committee.

The amount of paperwork demanded by the Ethics Commission — including the requirement that each contribution be certified by a town clerk to ensure it was from a registered voter — is arduous, but the payoff is immense. If they follow all the rules, candidates can leverage $56,250 in private money into as much as $1.8 million in public funds.

“The clean election system is both a sword and a shield. The sword is the money they give you, and the shield is the protection against someone outspending you. That’s very powerful,’’ said state Senator Peter Mills, the only Republican gubernatorial candidate running clean this year. “That’s the thing that lures people into the system, even if they don’t like it very much.’’

The commission accepts contributions through a clunky Web interface, but it is offline social networks that have proved to be crucial. Former House speaker John Richardson has enlisted unions that endorsed him — including state troopers and police, plumbers, and pipe-fitters — as a source of fund-raising manpower. Mitchell’s son received checks from more than 150 members of his Portland bowling league.

Conservation commissioner Pat McGowan traveled to Fort Kent, near Canada, to solicit from spectators at the Can-Am Crown International Dog Sled Race. The campaign set up phone banks so volunteers could schedule a time to visit voters at home and make a pitch in person.

“It’s one thing to ask for someone’s support, or vote, but another thing for $5,’’ said Brandon Maheu, McGowan’s campaign manager. “Someone needs to be engaged face to face. In these tough economic times, it’s still $5 from somebody’s pocket.’’

Even in person, the process is so arcane that it forced an awkward ending to Mitchell’s Bangor event: a 14-minute discussion about the protocols of the $5 contribution. Four of the dozen attendees ended up giving.

One of them, a Democratic activist — so knowledgeable about state politics that he interrupted Mitchell’s talk to identify the chairs of legislative committees she mentioned — donated only after learning, to his surprise, that he could contribute to more than one candidate.

“It appeals to me because I like the idea that there will be a limit to what will be spent,’’ said David Weeda, who operates an off-the-grid bed and breakfast in Bucksport. “Candidates should be running for the issues and not for the dollar.’’

For the clean candidates, it’s been all about the Lincolns. When Mitchell earned the endorsement of former president Bill Clinton this month, she did not ask him to record a television spot or host a $100 per-head fund-raiser for her seed-money account. Instead, Mitchell got Clinton to sign off on an online appeal for $5.

“It’s one of the lowest-dollar fund-raising letters anyone would ever receive,’’ said Marc Malon, Mitchell’s campaign manager. “You have to prioritize the [requests] and qualifying with the $5 contributions is the priority.’’

Qualifying for the clean elections program can prove so lucrative that it has inspired a genre of petty election crime. Two legislative candidates have been jailed for submitting real money under inaccurate names. In one case, the donors were deceased; in another the signatures of living voters were allegedly faked.

In Augusta, rumors abound that campaigns have paid canvassers as much as $10 for each small check they collect.

The ethics commission frowns on the practice but can not find anything improper about it.