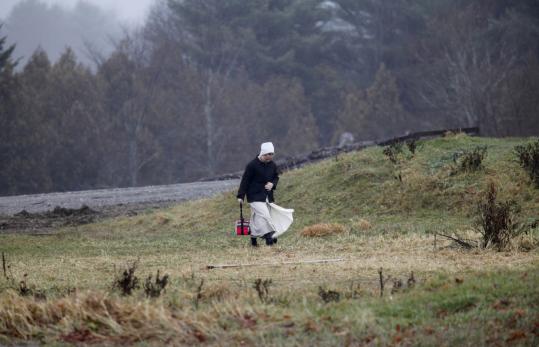 An Amish girl walked home from school in Unity, Maine. In the past year, eight Amish families have moved to the town. (Photos By Joel Page for The Boston Globe)
By Sarah Schweitzer Globe Staff / November 29, 2009

UNITY, Maine - The land was gorgeous. Pastures bounded by forests and overlooked by the distant Dixmont hills. And that was the problem.

As dairy farms in Unity have struggled and died in recent years, town leaders worried the setting would draw developers more interested in erecting neo-Colonials and paving roads than preserving the town’s agricultural heritage. They recruited organic farmers who bought small plots. But vast swaths remained.

Then a little more than a year ago men in banded straw hats and denim suits arrived and started buying big parcels. They built sturdy houses on the hillsides above fields where they planted strawberries and butternut squash, and loosed goats and cows to graze. They started small businesses on their land, turning out metal siding, wind turbines, and furniture, and sold vegetables and baked goods.

“The Amish were the solution that we were looking for - that we could never have dreamed up,’’ said Doug Fox, a neighbor of the Hochstetlers, one of Unity’s eight Amish families.

In a rugged stretch of Maine, where self-reliance and iconoclasm have been long honored, Amish are settling and finding eager neighbors. Amish first made homes in Smyrna and Easton in Aroostook County and most recently in Unity and neighboring Thorndike, in the state’s center, transforming landscapes into scenes that could be postcards from Lancaster, Pa. - byways dotted with pickups giving wide berth to horse-drawn buggies carrying women in bonnets and men with beards. Today, about 200 Amish live in Maine, according to their leaders.

They have come from Michigan and Canada, Tennessee and Kentucky, and other offshoots of original Amish settlements in Pennsylvania. Some are fleeing encroaching suburbs and neck-craning tourists, and seeking open-minded communities that will allow them to practice their brand of ultra-simple living. Some are following a directive to spread the word of their lifestyle and Christian beliefs by starting communities in places far from other Amish settlements.

With their hand-stitched shirts and chaste frocks, the Amish still command double-takes in Maine as they bike to school and carpool to . But they quickly have become integral parts of their communities even as they observe boundaries to avoid technologies that they shun, such as electricity from the grid. Among some Mainers, there is a small but not insignificant amount of Amish envy.

“I stand here all day and watch them,’’ said Josh Miville, manager of Chase Toys in Unity, a shop that sells all-terrain vehicles and sits across from an Amish farm and the community’s one-room schoolhouse. “And I’ll tell you, they’ve got something figured out that we don’t. It’s the simple life. No power bills, no cellphones, no worries.’’

In Unity, population 1,900, the Amish have found a particularly happy coincidence of interests. The town is home to Unity College, an environmental school that teaches sustainable living practices and lends an earthy quality to the culture. That a group of people with such small carbon footprints - erecting wind turbines to charge battery packs used for powering tools and lanterns, keeping food cold in summer in an insulated basement room lined with three wagonloads of ice chunks from a pond - would land here, strikes many as a perfect alignment.

“You should see how hard they work,’’ said Ron Rudolph, a town selectman and co-owner of an organic vineyard. “I couldn’t believe the houses they put up - in days. And the best part of it is, they don’t drive cars that smoke up the area.’’

“I like the laid-back lifestyle,’’ said Andrew Stoll, a 35-year-old father of five who moved to Unity from Michigan and runs a metal roofing business out of his barn. His mother and three brothers also now make their homes here. “People are very neighborly.’’

To be sure, when the Amish first arrived in town last year, they were curiosities, their culture a whispered topic that sent some people scurrying to laptop computers to figure out just what their dress and German-accented English were all about. Residents weren’t sure whether to wave when they saw Amish bicycling along the road, which was now sometimes speckled with manure from horses pulling buggies. Some leery residents asked the town clerk whether they paid property taxes. She assured them they did.

But in short order, they became the cool kids that everyone wanted to know. Recently, neighbors flocked to a pig roast the Hochstetlers hosted. Meanwhile, the Unity Union Church men’s fellowship lobbied for weeks to have the leading Amish men attend their meeting and explain the Amish lifestyle. On any given day, the Amish have their pick of residents’ standing offers to drive them to stores in nearby Waterville. (The Amish in Unity do not own or drive cars but will accept rides.)

“There’s a friendly competition to see who knows the most about the Amish,’’ said Fox, a professor of landscape horticulture at Unity College.

The Amish maintain some divisions. They send their children to their own school and do not permit their children to visit the homes of non-Amish. They are not easily reached because they don’t have phones in their houses, though some have put phones in sheds. Amish discourage phones in homes to preserve family time. They do not read local newspapers or vote in elections. And they often defer to their first language, Pennsylvania Dutch, a German dialect.

But Amish have increasingly become a part of town life. Crosstrax, a funky deli that sells milk and cheeses from local farms, now also offers baskets of Amish-grown vegetables - last week, spaghetti squash from Amish in Thorndike. Amish businessmen regularly show up at Chase Toys, where Miville receives faxes on their behalf. And come Wednesdays, the store is flooded with calls from residents wanting to know whether Abner Stoll is selling his glazed doughnuts across the way that week.

“The Amish don’t so much influence the town as complement the town,’’ said Naomi Caywood, a clerk at Crosstrax.

The Amish residents say they had little idea of Unity’s makeup when they settled here. They were looking for land and heard that Unity had ample stock at reasonable prices. (One family bought a 200-acre parcel for $350,000 and another a 100-acre parcel for $235,000, with money principally earned from small businesses.) They say the land needs work to revive its haying potential, but they have been pleasantly surprised by the town’s embrace of their efforts.

“They want the land to be preserved,’’ said Ervin Hochstetler, 45. He moved his wife, Esther, also 45, and 11 children - now 12 children, ages 21 to 7 months - to Unity from Smyrna, and is planning to build wind turbines that produce compressed air for pneumatic tools.

The Hochstetler home is a study in efficiency, with solar panels on the roof and two small wind turbines in the field. As they tucked into a meal of deer meat and potatoes for lunch on a recent day, their eldest daughter retrieved yogurt from the porch, where food is stored in winter. On the wall, a sign read: “To be content with little is hard, to be content with much is impossible.’’

Still, the house is not without traces of contemporary culture. The baby, Seth, happily bounced in a multicolored plastic ExerSaucer, and when the Hochstetlers hosted the pig roast at their home and neighbors brought bottles of soda and Little Debbie cakes, the Hochstelters did not turn away the offerings.