Vow to fight on as Maine rejects law 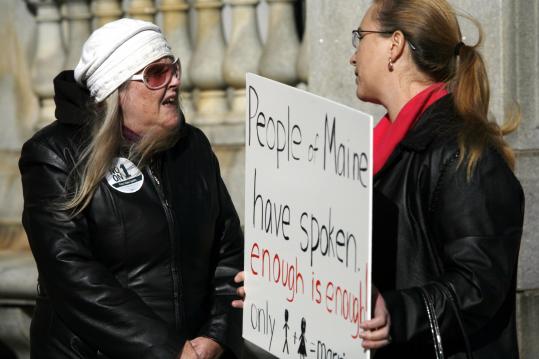 Two people argued their differences regarding same-sex marriage yesterday in front of City Hall in Portland, Maine. Supporters and opponents had to wait until the early morning before it was determined that Maine voters had rejected the marriage law. (Pat Wellenbach/ Associated Press)
By Maria Sacchetti Globe Staff / November 5, 2009

PORTLAND, Maine - Tearful supporters of same-sex marriage vowed to continue their fight in Maine yesterday after voters narrowly shot it down, while newly energized opponents pledged to preserve traditional marriage here and nationwide.

Fifty-three percent of Maine voters repealed the state’s new gay marriage law Tuesday, only six months after Governor John E. Baldacci had signed it, and both sides differed sharply on the significance of the vote.

Although devastated by the loss, gay-rights advocates said same-sex marriage is inevitable, pointing to Vermont’s progression from allowing civil unions in 2000 to marriage this spring. Massachusetts was the first state to permit gay marriage in 2003, and New Hampshire, Connecticut, and Iowa have followed.

Several other states, from New Jersey to Oregon, have made accommodation for gay couples, including permitting civil unions and passing antidiscrimination laws.

One year ago, 52 percent of California voters amended the state constitution to define marriage as only between a man and a woman.

“The people have spoken,’’ Bill Donohue, president of the New York-based Catholic League, said in a statement on the Maine vote. “The time has come for homosexuals to pack it in.’’

The US Conference of Catholic Bishops also hailed the outcome. In a statement, the conference said it opposed “unjust discrimination’’ but praised Maine’s preservation of traditional marriage.

Kris Mineau - president of the Massachusetts Family Institute, a Woburn public-policy organization that opposes gay marriage - said they are still polling and building support for a constitutional amendment. Such a measure would require the support of at least 50 lawmakers in two consecutive legislative sessions to qualify for a state referendum; so far, it does not appear to have enough support.

In Maine, the next steps for both sides remained unclear.

Many proponents of gay marriage hailed the fact that 47 percent of voters supported it, saying they had been able to change the minds of many residents, including Baldacci, a Catholic who had previously favored civil unions before he signed the gay-marriage law in May. Gay and lesbian couples said they wanted the same legal rights and protections as other couples, permitting them to make medical decisions for one another, as well as to show their commitment as full members of society.

Mainers who rejected gay marriage were worried that redefining marriage would affect the traditional family, that homosexuality would be taught in schools, and that young people would be encouraged to experiment with their sexuality, said officials with the campaign against same-sex marriage, Stand for Marriage Maine. “The lesson that should be learned is that, look, people care about marriage,’’ said Scott Fish, a spokesman for the group. “They want it left alone.’’

For gay couples who had envisioned weddings, celebrations, and a sense of settling into normal married life, the defeat was as personal as it was political.

Nancy Wanderer, a 61-year-old law professor from Topsham, and her partner of 23 years had hoped to marry in their backyard this summer, among the magnolias, rhododendrons, and azaleas.

“It’s very hard,’’ she said yesterday, sitting on the steps of Portland City Hall with more than 100 others who gathered at a press conference to reaffirm their support for gay marriage. “It’s hard to believe that people who voted yes had actually thought about the people they were voting about. . . . They forgot that people’s lives were actually affected.’’

On the sidelines of the press conference, Irina Malayev, a businesswoman, said she hoped the issue would simply go away. “I feel very strongly about redefining the institution of marriage,’’ she said. “We can be equal without being the same.’’