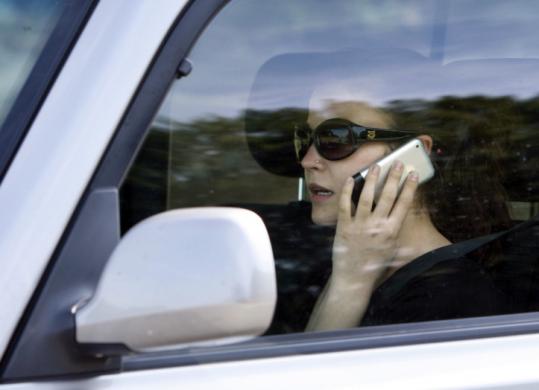 Maine’s new law defines distracted as being engaged in an activity not necessary to the operation of the vehicle. (Robert F. Bukaty/ Associated Press)
By Glenn Adams Associated Press / September 13, 2009

AUGUSTA, Maine - Motorists, drop those cellphones. And lose the laptops, bag the Big Macs, and nix the newspapers and roadmaps while you’re behind the wheel. It’s now against the law to drive while distracted in Maine.

More than a dozen states have passed laws making texting while driving illegal, and some states and cities have outlawed use of cell phones while driving. A bill in Congress would force states to ban texting or e-mailing or lose 25 percent of their annual federal highway funding.

Maine legislators, however, reasoned that accidents can result from a number of distractions not just limited to handheld communication devices. Roughly 12,000 crashes in Maine each year - about a third of the total crashes in the state - stem from some kind of driver distraction, said Lt. Chris Grotton, who helped to develop Maine’s new law.

“Our focus here was, instead of going after the device, let’s focus on the real issue - and the issue is distraction,’’ said Grotton. “I think it will mitigate accidents. It’s a step, but a big step.’’

State Senator Bill Diamond, Democrat of Windham, said he was moved to introduce the bill after a state trooper reported seeing a woman driving through turnpike toll booths during the Fourth of July weekend while watching the “Gilmore Girls’’ on her laptop.

Maine’s new law, which sets fines of up to $500, defines distracted as being engaged in an activity not necessary to the operation of the vehicle and that impairs, or could impair, the ability to drive safely.

As Diamond explains it, doing something that takes a driver’s concentration off the road and could potentially cause an accident becomes illegal. It doesn’t make any particular action illegal, as long as the driver isn’t distracted, said Diamond.

Highly publicized cases of crashes involving drivers texting have also prompted Massachusetts lawmakers to consider crackdowns on texting or cellphone use. In June, the Legislature’s Transportation Committee heard testimony on 15 different bills that would regulate texting or using a cellphone without a hands-free device while driving. But so far, no measures have passed.