Fear envelops a refuge of immigrants in Maine 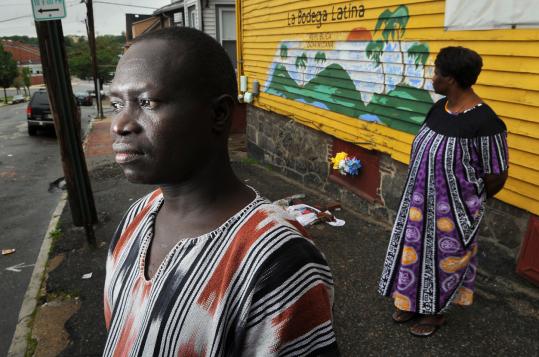 PORTLAND, Maine - They are refugees from one of the world’s poorest countries, Sudanese immigrants who flocked to Portland to escape a devastating civil war and settle in a state with a reputation for tolerance and a peaceful way of life.

Now, many Sudanese leaders say, their community is living in fear.

Since September, two young Sudanese men have been shot and killed, one by Portland police. A third man died from his injuries in November 2007 that Sudanese activists say followed a vicious beating.

The recent killings intensified frictions that had already been on the rise as the city’s African immigrant population has grown. Recently, shots have been fired into a Sudanese home, and confrontations between Sudanese youths and police have escalated. Sudanese leaders are questioning whether police are investigating the violence aggressively enough. No arrests have been made in the deaths.

“We are scared,’’ said Edward Laboke, 45, a spokesman for the Sudanese community. “Whether we are being targeted or are the victims of random criminal activity, we don’t know.’’

Police Chief James Craig, who recently left the Los Angeles force to head Maine’s largest municipal police department, denies that the Sudanese community is being targeted. He is, he said, committed to improving relations with the community. One of his first acts after becoming chief on May 4 was to meet with the father of James Angelo, a 27-year-old security guard who was fatally shot in September while working at Mercy Hospital.

“There’s still a lot of tension in the Sudanese community,’’ said Craig, who is the first African-American chief in a department that counts four blacks among 122 officers.

That tension is evident. A city and state that once seemed an oasis of peace has, for many of the immigrants, taken a confusing and menacing turn.

“When the young people go outside, they are not safe,’’ said Deng Atem, a 37-year-old father of four, who shook his head at the unsolved violence. “Maybe it will be my son tomorrow.’’

Last week, a step was taken toward filing a wrongful-death suit in the fatal shooting of David Okot, 26, on April 25. A notice of claim, submitted in state court against Portland police, requests investigative material from the authorities, such as videotapes taken at the shooting scene, to determine whether the victim had reached for a gun before at least two officers opened fire.

Daniel Lilley, a Portland lawyer who represents the victim’s family, said the information will help decide whether to proceed with the suit. The claim alleges that police “did not act with any justification or in self-defense, mistakenly or otherwise.’’

In a telephone interview, Lilley said, “We believe that we have sufficient information from eyewitnesses . . . who saw the actual events and said that our client did not draw, or go for, or attempt to grab his gun in any manner.’’

The state attorney general’s office is investigating the shooting, as is required in the use of deadly force by a Maine police officer. Brian MacMaster, director of investigations for the attorney general, said a report is expected by the end of the month.

Most of the Sudanese, primarily Christians from the southern part of the country, have been migrating to Portland since the early 1990s. Like the Somali refugees who resettled in Maine communities such as Portland and Lewiston, many were attracted by pioneers from their families, who sent back word of a clean refuge from their warravaged country.

Sudanese leaders estimate that 2,500 of their countrymen live in Portland, where city officials said a comparable number of Somalis resides. The city‘s overall population of 64,000 was 91 percent white in 2000, according to the federal census.

Those leaders acknowledge that some youths have turned to crime or drugs, potentially fomenting both real and perceived problems in the community. Sarah Espicho, secretary of the Sudanese Community Association of Maine, said she is battling a sense that the Sudanese are responsible for a disproportionate share of the city’s crime.

“Each individual has to be judged,’’ Espicho said. Instead, many people believe “the Sudanese are spoiling the city. That our children are criminals,’’ she said.

According to the police chief, some of the tension in the community has turned into aggressive provocation from a small number of Sudanese youths, who have been throwing projectiles at police, spitting, and calling them murderers and killers. Police recently have begun patrolling trouble spots in pairs.

As part of an effort to build bridges, Craig plans to beef up sports options for Sudanese youth and to improve data collection that could pinpoint neighborhoods and groups being victimized by crime.

“We can make significant changes for the better, but we have to have a relationship,’’ Craig said.

That relationship, Craig and Sudanese leaders acknowledge, has been slow to evolve. The chief said youths have been reluctant to meet with police, and Sudanese say officers can be heavy-handed with their young.

Jackson Okot, the brother of the April shooting victim, said the racial climate in Portland seemed to darken before he moved to Boston three years ago.

“When I see a police officer here in Boston,’’ said Okot, 27, “I know they’re not looking for me. When I look out the window, I see diversity.’’

In 1998, Okot said, he was thrown to the ground by a Portland officer who mistakenly detained him and used a racial epithet while saying, “Welcome to America.’’ A civil jury awarded a nominal sum after Okot and another teenager sued police.

Despite that 11-year-old incident, the police chief is adamant that Portland’s white residents welcome diversity in this historically homogeneous city.

“It’s a warm and giving city, and I don’t see where there is this tension between the greater Portland community and the Sudanese community,’’ Craig said.

Sudanese leaders, who are not so sure, ask that their entire community not be blamed.

“We want the issue to be addressed according to the law,’’ Laboke said, referring to the unsolved deaths. “We don’t want this to continue. We want this to stop. This is the alarm bell we are ringing to the city and the state.’’

If that bell is not heeded, Laboke added, his ties to Portland could be frayed beyond repair.

“I still feel this is a good city,’’ said Laboke, a father of four. “But if these incidents continue, I don’t think it will be as good for me.’’

MacQuarrie can be reached at b_macquarrie@globe.com.