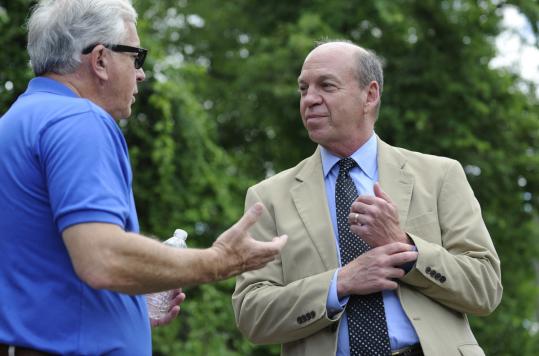 WATERBURY, Conn. - Mike Clark was a young FBI agent when he came to this long-struggling western Connecticut city, chasing a corrupt mayor through the streets and hauling him off to prison.

Some of the state’s most promising and ambitious young Republicans built their careers here, only to have Clark and the FBI’s corruption squad take them down. He helped send two Waterbury mayors to prison and supervised an investigation that sent Governor John G. Rowland, a beloved figure, to prison for 10 months for corruption.

Now Clark is headed back, without handcuffs, asking the Republican establishment to send him to Congress, to the same seat that launched Rowland’s career.

“I’ve got this unique perspective that I’m bringing to the table,’’ Clark said.

Clark is seeking the nomination for next year’s election in the Fifth Congressional District, which includes wealthy Hartford suburbs and cities such as Waterbury and Danbury.

He faces plenty of competition, including House Speaker Christopher Donovan on the Democratic side and several fellow Republicans. Representative Chris Murphy, a Democrat who holds the seat, is running for the Senate.

“I don’t see any real definite front-runner at this point,’’ said Gary Rose, a politics professor at Sacred Heart University.

Clark, 56, would join two other FBI agents in Congress. His FBI background could help him, though it could pose concerns for some more liberal voters worried about civil liberties and aggressive law enforcement, Rose said.

“The notion of law and order and being tough on crime, I think that plays out quite well among a lot of the ethnic, working class Republicans here in the Fifth District,’’ Rose said.

“I think Connecticut would be lucky to have someone with his background in Congress,’’ said Dan Bowen, a 60-year-old used book dealer. “The people in Waterbury are basically conservative. They want law and order, and they want politicians held accountable.’’

Two decades ago, Clark chased former Waterbury’s mayor, Joseph Santopietro, through the street to arrest him.

Santopietro, elected mayor at 26, said he had just left church and ran from Clark out of fear, not sure who was chasing him. Santopietro, who spent more than six years in prison for corruption, said Clark has the right to run for office. “It’s a free society. He’s welcome to do that,’’ Santopietro said.

Francis Donnarumma, Waterbury’s attorney at the time who was convicted of a tax charge and cooperated with government investigators, recalled Clark visiting his home the day before his sentencing in a show of support.

“I found that to be out of the ordinary, and really extraordinary in fact,’’ Donnarumma said.

Donnarumma said he was thrilled to learn Clark was running for Congress.

“It was interesting to see someone who has been through that side of government corruption investigations willing to jump into what is often a treacherous body of water,’’ he said.

“He has seen the worst of it. He must perceive a certain goodness in his fellow citizens that he’s going to jump in and fearlessly go where others have fallen.’’

Clark is not as well-known as other candidates such as Lisa Wilson-Foley, a businesswoman who ran unsuccessfully last year for lieutenant governor.

“There is some irony,’’ he admits, in becoming a politician after spending a career investigating them.

While plenty of politicians conduct listening tours these days, Clark said he really learned to observe and listen at the FBI as he tried to unravel complicated schemes.

Federal agents were wiretapping former Waterbury mayor Philip Giordano for a corruption probe when they were startled to hear a woman arranging a rendezvous for Giordano with two girls, ages 9 and 11.

Clark and other FBI agents arrived at the girls’ home at 2 a.m. to rescue them.

Giordano, who ran unsuccessfully for the US Senate, was sentenced to 37 years in prison in 2003 for abusing the girls.

“It made me feel we made a difference,’’ Clark said.