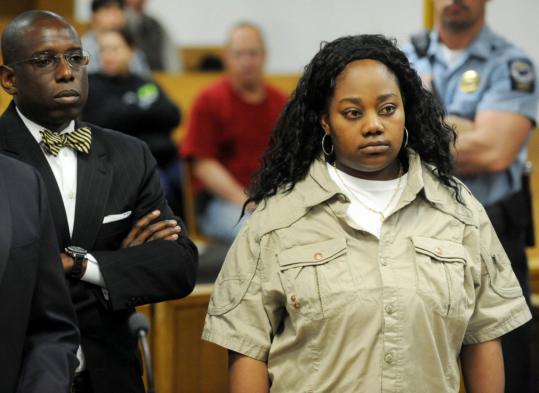 NORWALK, Conn. — A homeless single mother who lives in her van pleaded not guilty yesterday to stealing nearly $16,000 worth of education for her son by enrolling the kindergartner in her baby sitter’s school district.

Tanya McDowell, 33, was arraigned in Norwalk, where she was arrested April 14 on felony charges of committing and attempting to commit first-degree larceny.

Prosecutors say McDowell used her baby sitter’s address to enroll her son in Norwalk schools in the fall but should have registered the boy in nearby Bridgeport, a significantly poorer urban district and the location of her last permanent address.

Officials call it the first known case of its type in Connecticut, although similar conflicts have played out elsewhere in the United States as districts try to ensure scarce local tax dollars are used for local students.

“He’s only 5 years old, and it’s hard like to explain to a 5-year-old kid, you know, ‘You got kicked out because we don’t have a steady address yet,’ ’’ said McDowell, an unemployed cook.

McDowell, who is black, has drawn the support of civil rights leaders and parents’ groups and is being represented by a lawyer provided by the Connecticut chapter of the National Association for the Advancement of Colored People. She faces up to 20 years in prison and up to $15,000 in fines if convicted of the felony larceny charge.

She said before yesterday’s arraignment that her bewildered son, A.J., repeatedly asks why he was kicked out of his school. The boy was removed from Norwalk’s Brookside Elementary School in January and now lives with relatives in Bridgeport, where he attends kindergarten.

“He’s very curious in regards to it because he thinks I stole Brookside away from him,’’ said McDowell.

Connecticut students can only attend public schools in the municipality where their parents or guardians reside, unless they go to a magnet school, charter school, or another district under a desegregation plan.

McDowell’s case is not the nation’s first. Last year, a single mother from Ohio was convicted of a felony for using her father’s address to enroll her children in a suburban district rather than the larger, underperforming Akron district.

Gwen Samuel, one of McDowell’s supporters and founder of the Connecticut Parents Union, said she would do the same thing.

“I would use the janitor’s address to get my kid a good education; that’s not even negotiable,’’ said Samuel, of Meriden.

McDowell would not comment on the specifics of her case yesterday, but she has said that she did not believe she was doing anything wrong when she enrolled her son in Norwalk.

She said she splits her time between a Norwalk shelter and her van, occasionally sleeping at a friend’s Bridgeport apartment. Her son went to the baby sitter’s Norwalk apartment every day after school, she said.

Norwalk officials have said there is far more to the story than a downtrodden single mother seeking a better education for her son.

Authorities, however, say her most recent permanent address was in Bridgeport, making that his home district. They say instead of following proper procedures, McDowell lied to use the address of the baby sitter and, according to court records, wrote on the enrollment affidavit that the baby sitter was her son’s legal guardian.

The baby sitter has been evicted from her public housing unit, but has not been criminally charged.

Norwalk Mayor Richard Moccia told the Hartford Courant this week that the district never would have rejected a homeless student and offers extensive services for those children, but that parents must follow proper procedures.

He said he is upset at how Norwalk has been portrayed and that McDowell “has somehow become a heroine [while] the city and the prosecutor’s office has become the devil incarnate.’’

Complicating matters is the fact that Moccia’s daughter, Suzanne Vieaux, is the top prosecutor whose office is handling McDowell’s case.

McDowell’s lawyer, Darnell Crosland, said yesterday they will ask a judge to move the case to another courthouse to avoid the potential conflict of interest.

McDowell is scheduled to return to court May 11 for the school enrollment case. She will also appear before a judge that day on the unrelated drug possession case.