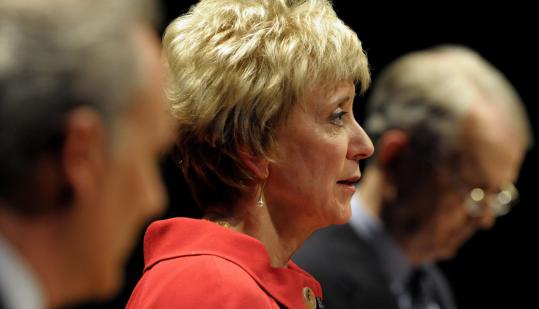 Linda McMahon has seen her candidacy go from a curiosity to a genuine threat. (John Woike/ Associated Press)
By Susan Milligan Globe Staff / May 20, 2010

WEST HARTFORD — Just months ago, Republican Linda McMahon’s quest for the US Senate seat here seemed quixotic at best: a former world wrestling executive, with no political experience or network, spending millions of her own fortune on an election in a heavily Democratic state.

But with a strong anti-establishment mood sweeping the country, McMahon’s candidacy has gone from a curiosity to a genuine threat to the experienced GOP opponent she faces in a party nominating contest tomorrow — and to Democrats who are newly worried about revelations that their party’s front-runner, state Attorney General Richard Blumenthal, incorrectly said that he served in Vietnam.

McMahon has surged ahead in polls against her primary challenger, former representative Rob Simmons, a moderate lawmaker who was initially touted by national Republicans as the GOP’s best chance of snatching the seat being vacated by retiring Democratic Senator Chris Dodd.

Tomorrow, Connecticut Republican delegates are slated to vote for their preferred candidate, with any contender who gets at least 15 percent eligible to run in the August primary.

McMahon seems to have benefited from Blumenthal’s troubles and the surge of support for candidates who are outside the political establishment.

“I’m capitalizing on the mood I find across Connecticut. We don’t want people who are the same old career politicians. We want a fresh face and fresh ideas,’’ McMahon said in an interview this week at her West Hartford headquarters.

McMahon hopes to ride the anti-Washington tide at work earlier this week when Rand Paul, backed by the Tea Party movement, seized the GOP Senate nomination in Kentucky against an establishment-supported contender. Meanwhile Democratic incumbent Senator Arlen Specter lost his Pennsylvania primary. In Arkansas, Democratic Senator Blanche Lincoln was forced into a runoff.

In Nevada and Florida, the Tea Party movement is frustrating the campaigns of GOP establishment candidates, and in New Hampshire, Colorado, Indiana, and California, candidates in both parties are claiming the mantle of outsider.

McMahon describes herself as a fiscal conservative, focused on jobs and the national debt. She has met with Tea Party activists but has not aligned herself with the movement, leaders of whom have endorsed a third candidate, businessman Peter Schiff. A March 17 Quinnipiac University poll showed McMahon with 44 percent of the GOP vote, Simmons with 34 percent, and Schiff with 9 percent of the vote.

Schiff attributed his low polling numbers to a lack of exposure, saying that if voters “read the tea leaves’’ on what is happening in Kentucky, he will do better. “Hopefully, the Republican hierarchy will get the message,’’ he said.

Blumenthal, the popular Democratic attorney general, appeared almost unbeatable before this week. But then he acknowledged, after a New York Times report, that he “on a few occasions’’ erroneously said he served in Vietnam, instead of stateside, in the reserves. A Rasmussen poll conducted immediately after the disclosure showed Blumenthal’s numbers plummeting, putting him only slightly ahead of either McMahon or Simmons in a general election.

McMahon, meanwhile, faces a critical challenge: How does she shed the image of a wrestling industry tainted with steroid abuse scandals, orchestrated head-butting, and a lack of the sort of dignity usually associated with the US Senate?

Simmons has been hammering McMahon for her wrestling background, noting the steroid abuse scandal that led to a congressional investigation in the 1990s. With far less cash than the self-financed McMahon, the Simmons campaign has trumpeted news stories about how McMahon helped tip off a steroid-providing doctor about the Capitol Hill inquiry.

McMahon, the Simmons campaign is now arguing, does not have the credentials to take on the damaged Blumenthal in a character fight.

On paper, Simmons seems perfect as a GOP contender in New England, where moderate Republicans have historically been more successful than conservative ones. He had a collegial relationship with both Democrats and Republicans when he served in Congress. His lengthy Army career includes two Bronze Star medals for service in Vietnam. He is credited with helping save the Groton Submarine Base from closure by the Pentagon, salvaging an estimated 31,000 jobs.

“Character is now an unavoidable issue in this race. Republicans should not believe for one second that extreme wealth will overcome the fundamental character defects that plague Linda McMahon,’’ said Simmons campaign manager Jim Barnett.

McMahon, asked about the steroid abuse charges, responded, “we were fully exonerated at trial in 1994.’’ The wrestling association now has a three-strikes-and-you’re-out policy on steroid use, and “it’s not a competitive sport. We’re entertainment,’’ McMahon said. In professional wrestling, “the whole steroid issue doesn’t give you a competitive advantage.’’

McMahon stressed that she ran the business side of the .

“Did you expect me to body-slam you?’’ she said jokingly. “I’m proud of WWE and the work I did there,’’ McMahon said, asserting that she “really, absolutely changed an industry from a kind of carnivalesque atmosphere to a really professional’’ one.

McMahon supporters credit her rise with the national trend against established politicians, saying she appeals to the same sort of voters who shook up the primaries in Arkansas, Kentucky, and Pennsylvania Tuesday.

“I think there’s a lot of anger in Connecticut, and there should be,’’ said Len Fasano, a state senator and McMahon supporter. “There is frustration. People are saying, if you can’t change minds [in Washington], you have to change people.’’

But the main reason for McMahon’s surge, said Quinnipiac University pollster Doug Schwartz, is cash. McMahon has committed to spending $50 million of her own money on her campaign, and it shows. She has been all over the airwaves, and her glossy fliers have been mailed to targeted neighborhoods across the state.

Simmons has yet to run a TV or radio ad, and is hoping news coverage of his campaign will convince voters that he is the stronger general election candidate. His campaign website, meanwhile, portrays him as the outsider: “Tired of Washington and want a change? Join Rob Simmons.’’