At 13, collegian lets no challenge slip past 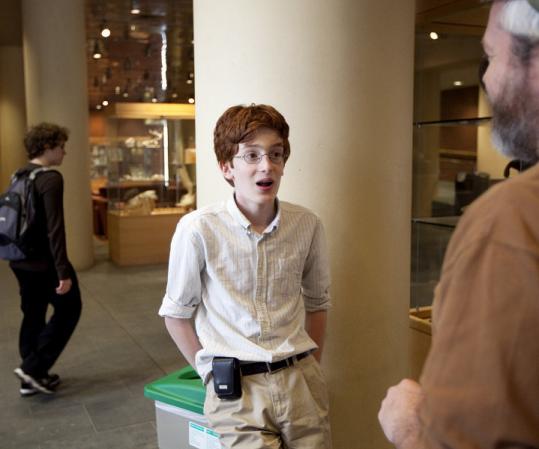 Colin Carlson, 13, with his mentor at the University of Connecticut, Tobias Landberg, after the teen aced a test. (Yoon S. Byun/ Globe Staff)
By Brian MacQuarrie Globe Staff / March 31, 2010

STORRS, Conn. — Colin Carlson, a gangly University of Connecticut sophomore, hustled across a campus lobby to greet a friend with loud high-fives and a broad, beaming grin. Carlson had just scored 100 on a midterm exam on the evolution of green plants. He was ecstatic to the point of giddiness.

Carlson, who had been nervous about the test, probably could have spared himself the anxiety. The Coventry resident carries a 3.9 grade-point average, is excelling in a double major, and is described in superlatives by his professors and academic advisers.

“I have the emotional maturity and composure of an 18-year-old,’’ Carlson said, twirling a strand of hair from his tousled auburn mop. “I don’t have that much common ground with people my age.’’

Carlson, who is as assertive as he is articulate, is enrolled in the honors program at UConn, where he has been taking classes since he was 9. He socializes with “green’’-conscious students at Eco House, commutes from home, and has plotted a determined path toward a doctorate in environmental science and a law degree.

He has also butted heads with the university over its refusal to let him accompany a science class on a field trip to South Africa this summer. The issue has thrust him into the national spotlight.

If not 18, Carlson looks older than his age. But at 5-feet-8 and only 112 pounds, with braces and owl-rimmed glasses on a long and slender face, Carlson does not resemble the typical UConn student. He bears an uncanny resemblance to Harry Potter.

“He’s undergoing puberty right now, and kids in school have been through that already,’’ said Tobias Landberg, a doctoral student and mentor. “But socially he fits in very well, probably better than he would in middle school.’’

Carlson, an only child, seconds that assumption.

“Ask a 13-year-old if they want to hang out with me, and the answer is a definitive no,’’ he said.

Carlson does not play video games, does not listen to pop music, plays classical piano, and is fond of cribbage and chess. When he took an introductory biology course as an unofficial student at age 9, he got an A on the tests.

“He grasps really complicated subjects and applies them,’’ said Carl Schlichting, the professor who taught that course. “It’s a skill that most of us learn, and he’s just got it very early in life.’’

The university experience has been enriching, exciting, and energizing, Carlson said. But now, the teenager is experiencing an adult-style face-off, a real-world blip in the rocket-like trajectory of his academic career. The university has balked at his request to go to South Africa, even after his mother, Jessica Offir, offered to pay her own way as a chaperone.

Carlson said the barrier smacks of age discrimination, the university isn’t commenting, and the youth’s lawyer is comparing the confrontation with high-profile cases from the civil-rights era.

“This makes me feel how the first black students must have felt after being integrated into the University of Alabama,’’ said Carlson’s lawyer, Michael Agranoff.

Carlson, as a result, said he feels diminished and disrespected. The family has filed a complaint with the university’s Office of Diversity and Equity.

“My entire academics and everything about me can be overturned by a two-digit number,’’ Carlson said with a sigh.

Still, he is pressing ahead with the optimism one would expect from a 13-year-old. And he and his mother are laying alternative plans for a different field trip to Africa.

“The university isn’t able to comment on issues involving pending litigation or claims,’’ said Michael Kirk, the UConn spokesman. However, he added, “the safety of the students is really our first concern.’’

Offir, a widow with a doctorate in social psychology, believes the case reflects a social prejudice against dramatically accelerated education for unusually gifted students. Her son, who began taking university courses after the fourth grade, ranks in the top .01 percent in intelligence, Offir said.

“Some kids don’t crawl; they just get up and walk,’’ said Offir, who cut short a question that sought to compare Carlson with his 13-year-old “peers.’’

“We prefer the term ‘age-cohort.’ They’re not his peers, academically or socially,’’ Offir said. “Public schools, no matter how good the institution, wouldn’t be able to accommodate his abilities.’’

Carlson and another 13-year-old are the youngest students in the University of Connecticut system, Kirk said. Nationwide, he also is an extreme rarity, said Bill McClintick, former president of the National Association for College Admission Counseling.

“I think most of us in the profession would not recommend this for most kids unless they’re very special,’’ said McClintick, who is director of college counseling at Mercersburg Academy in Pennsylvania. “I think they have to have some exceptional academic ability that simply outpaces what’s available in their local school system.’’

Carlson’s ability to live at home and the support he receives from his mother improve his chances for a successful college experience, McClintick said.

So far, Carlson said, he feels accepted by students at the university, particularly those who share his passion for the environment. And he does not spend any time wondering what he is missing in the world of his age-cohorts.

“You could I say I could be missing out on certain activities,’’ Carlson said, “but you could also say that about every college student who drinks or has unprotected sex.’’

To Carlson, life these days is one big research laboratory filled with endless and captivating possibility.

And, unlike many undergraduates, he is not distracted by issues of romance. There is no girlfriend, Carlson said with a smile, but there is “a work in progress.’’

Offir, however, said she is confident that the age difference is enough to keep her son focused on his studies — for now. In any event, she added: “Colin has good taste in girls. I’m not worried.’’