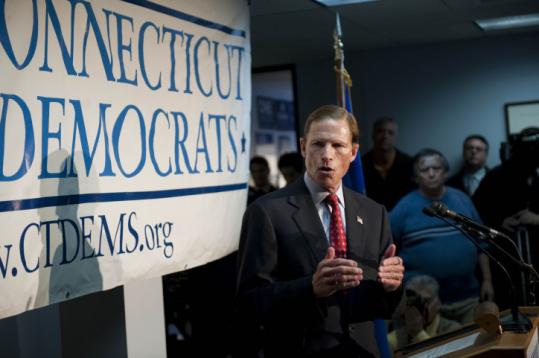 Richard Blumenthal, the popular five-term attorney general of Connecticut, yesterday emerged as the front-runner to succeed fellow Democrat Chris Dodd, transforming a potentially tough reelection fight for the embattled incumbent senator into a campaign that analysts said would be more favorable for Democrats.

Blumenthal, the state’s attorney general since 1990, jumped into the race two hours after Dodd announced that he would not seek reelection to the Senate seat he has held for 30 years.

“I have the goal of fighting as tirelessly and as tenaciously in the United States Senate for the people of Connecticut as I have done for the last two decades as attorney general,’’ Blumenthal said in a news conference at Democratic Party headquarters in Hartford. “The people of Connecticut know that I have never walked away from a fight and I have always put them first.’’

Analysts said Blumenthal would help the Democrats hold onto a seat that has been in the party for 47 years. The Connecticut race was one of several Republicans had targeted as they seek to erode the Democrats’ 60-vote majority in the Senate.

“The election now moves from being a competitive race to one that is more in the Democratic Party’s column, although I do want to emphasize that this is not a foregone conclusion, even though Blumenthal is wildly popular here in the state of Connecticut,’’ said Gary L. Rose, chairman of the department of government and politics at Sacred Heart University in Fairfield, Conn.

In the Democratic primary in August, Blumenthal will face Merrick Alpert, a little-known software executive who announced months ago he was running for Dodd’s seat. Some analysts said they believed Alpert might now step aside, given Blumenthal’s popularity in the Democratic Party, but Alpert said in an interview that he would not drop out, adding, “I welcome Dick Blumenthal.’’

“While the players may change, the issues that are important to the people of Connecticut don’t change,’’ Alpert said.

Blumenthal’s more serious competition is likely to come from the winner of the Republican primary. That race pits Linda McMahon, the former chief executive of who has been using her vast personal fortune to fund a barrage of television ads, against Rob Simmons, a former CIA officer and former congressman who lost his seat to a Democrat in 2006. Peter Schiff, a former adviser to Ron Paul, is also running in the Republican primary.

Blumenthal, 63, said he was anticipating a tough race. “I have always run as an underdog,’’ he said. “I take no one for granted. I take nothing for granted.’’

Still, some political observers said, Blumenthal will be tough to beat in November.

“Dick Blumenthal will obviously get the nomination and he’ll win the seat,’’ said Lowell P. Weicker Jr., the former Republican senator and governor of Connecticut who is now an independent. “He’s a very popular figure in Connecticut politics, and there’s nothing on the Republican side that can match up with his name recognition, never mind his accomplishments.’’

And Donald W. Greenberg, a political scientist at Fairfield University, said many Democrats were “delighted’’ that Dodd had cleared the way for Blumenthal, whom he called “without question the most popular Democrat in the state.’’

“It’s not to say they don’t want Dodd back in the Senate,’’ Greenberg said. “He’s powerful. But they saw a lot of vulnerability. This gives them a strong chance of winning the seat.’’

A graduate of Harvard College and Yale Law School, where he was editor of the Yale Law Journal, Blumenthal previously served in the Connecticut House and Senate. As attorney general, he has pursued cases against , tobacco companies, insurers, and credit card firms. In a Quinnipiac University poll in November, 78 percent of residents said they approved of the way Blumenthal has handled his job.

“He has consistently, as attorney general, fought for issues that the people like: against insurance regulation, against utility regulation, big on environmental issues,’’ Greenberg said. “He’s always been seen as someone willing to fight the corporate interests and the lobbyists in the name of the people. And he has a reputation as a straight shooter.’’

Blumenthal has made little secret of his desire for higher office, saying yesterday “the United State Senate has been a public service goal of mine for a long time.’’

“I have not been pressured to take this step,’’ he said, grinning.

Democrats had been worried about Dodd’s prospects. Many voters were angry about his role in crafting legislation that allowed bailout money to be used for bonuses for executives of AIG, the troubled insurance giant, and about low-rate mortgage loans he took from Countrywide Financial, another company embroiled in the financial crisis.

Some were also unhappy that Dodd moved with his family to Iowa for two months before a woeful showing in that state’s caucuses drove him from the 2008 presidential race.

In his announcement, Dodd acknowledged he was in “the toughest political shape of my career,’’ although he insisted he could have won reelection. He said he realized no one “is irreplaceable’’ and “those who think otherwise are dangerous.’’

“In the long sweep of American history, there are moments for each elected official to step aside and let others step up,’’ he said outside his home in East Haddam. “This is my moment to step aside.’’