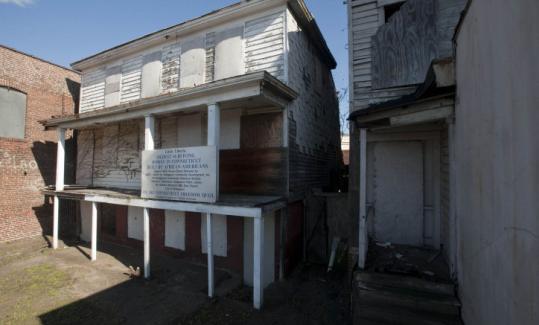 The homes, erected in 1848 just as Connecticut outlawed slavery, are the last remnants of the city’s once-thriving “Little Liberia’’ neighborhood of free black residents.

Now, the tale of the two wood-frame houses and the entrepreneurial Freeman sisters who owned them is showcasing the significance of such antebellum communities, but just as preservation money for the houses is especially scarce.

A deal with the city of Bridgeport after lengthy negotiations recently saved them from foreclosure for back taxes. However, supporters’ joy is tempered by worry that the bad economy may hamper donations for the preservation work.

Cost estimates for their renovation are expected to surpass $1 million. The adjacent houses, built by sisters Mary and Eliza Freeman, were around the corner from the home of their brother, Joel, whose harborside property is suspected by historians to have been an Underground Railroad stop.

They have survived countless tenants, urban renewal projects that leveled buildings around them, at least one fire, and 160 years of New England winters. Long overlooked in a city where blight is a constant challenge, the houses survived by chance rather than design, largely because no one ever got around to demolishing them.

“It’s like there’s some force up in the sky that protected them,’’ said Charles Brilvich, a former Bridgeport city historian who has researched Little Liberia extensively.

Maisa Tisdale, head of the volunteer Friends of the Freeman Houses group, said, “We’re going with the guardian angel theory.’’

Little Liberia, which was settled around 1820, wasn’t alone in its status as a booming antebellum community of free black residents in the north. They gathered in similar neighborhoods in many cities with growing job markets and easy water access, notably the northern slope of Boston’s Beacon Hill, Sandy Ground on New York’s Staten Island, and Hard-Scrabble in Providence.

Some residents were born free in the North, emancipated by Northern owners or had escaped from Southern slavery.