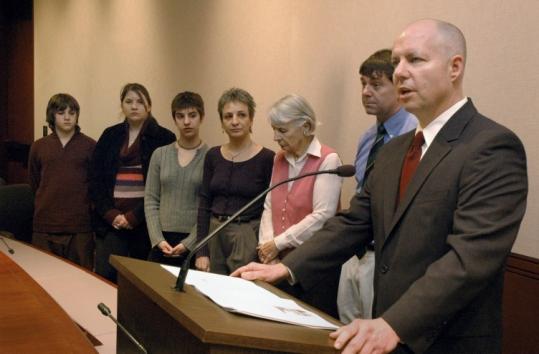 HARTFORD - Three years ago, Debra Avery and her family were shocked to learn they were direct descendants of Mary Sanford, a wife and mother of five who was hanged in Connecticut in 1692 after being convicted of witchcraft.

Yesterday, they went to the state Capitol, in the same city where Sanford and several other convicted witches were executed, to ask lawmakers to restore their relatives' good name. Legislators are considering a resolution that states that those convicted and their descendants should be freed from the stigma of the witchcraft accusations.

Avery, a New Preston resident and an eighth-generation great-granddaughter of Mary Sanford, said it has become a personal mission. "We talk an awful lot about Mary being with us," she said.

"We talk about whether we are Mary exonerating ourselves. But Mary has become a big part of our life. We talk about her a lot. I think it's in the DNA."

According to legislative research, nine women and two men were convicted and hanged for witchcraft in the mid-1600s in Connecticut. Others were banished or fled the colony.

Two women were dropped into water to see if they possessed evil spirits. If they sank, they were believed to be innocent. But if they floated, they were thought to be guilty.

One was acquitted, while the other was reprieved by the General Assembly. Others were also acquitted of the alleged crimes.

In Mary Sanford's case, there were no records explaining why the 39-year-old was accused of being a witch. Her descendants said they have discovered that six months after Sanford was hanged, an accused witch said she had been with her at a meeting in the woods. Sanford's husband, Andrew, was also indicted, but was later acquitted.

The resolution before the Judiciary Committee does not specifically pardon those convicted, but denounces the trials as shocking and the result of communitywide hysteria and fear.

Representative Michael Lawlor, committee cochairman, said the Legislature does not want to acknowledge witchcraft as a crime. A committee vote is scheduled for Monday.

While Lawlor, a Democrat from East Haven, conceded that the resolution is not the most important issue facing the General Assembly this session, he said, "It's the obligation of our state government to set the record straight sometimes."

Senator Andrew Roraback, a Goshen Republican who was approached by the Avery family to pursue the legislation, said: "It is my hope we will do justice to those who were wrongly executed so many years ago. It's never too late to right a wrong."