For students, future of school desks is now 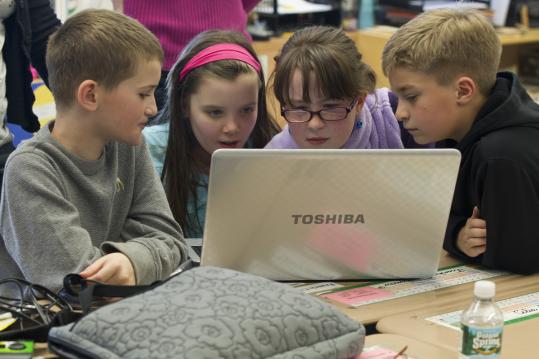 At least once a week, when the school day draws to a close at the L.D. Batchelder Elementary School in North Reading, a handful of third-graders lag behind in a nondescript classroom, determined to build the desk of the future.

For months, the four pint-sized pupils have been poring over every detail of their design. They built a prototype, created a website, and even wrote a rap song to explain their vision. The project, which began in October with a whisper of an idea, has already earned the 8- and 9-year-olds some serious bragging rights.

The SMARTdesk team - Megan Carey, Sarah Hatton, Brian Heffernan, and Blake Miller - was selected as one of 24 regional winning teams from a field of 4,807 entries in the 2012 Toshiba/National Science Teachers Association ExploraVision program. The competition requires students to craft ideas for innovations that could be used in 20 years.

The Batchelder students were among the youngest of this year’s regional winners. Other winning teams in their age group envisioned fewer trips to the dentist. One team designed a cavity prevention detector, another created a toothbrush sensor. In all, there were six regional winners in the kindergarten to grade 3 group.

“When we learned we won I felt like screaming, I was so excited,’’ said Carey, 9. Trapped in a crowded cafeteria with dozens of eyes fixed on her, she chose instead to do the next best thing.

On Monday the team will learn if it is among the eight national winners. Hatton is bracing herself for the announcement. All four of the teammates are hopeful they will emerge victorious.

The concept they presented to the judges is both simple and sophisticated. As they envision it, the SMARTdesk would incorporate wireless technology into what appears to be a traditional school desk. When students are working on an art project, the desk would have a sleek, flat surface. But when a reading, writing, or math assignment is to be done, a touch screen would appear, complete with digital worksheets that could be passed in to the teacher over the network.

Stuck on a question? Tap the “help’’ button and the desk would display images or words that describe strategies that may be used to solve the particular problem.

“The desk will help students in different subjects, in real time,’’ said Miller, 8, noting that the SMARTdesk could be equipped with a SMARTpencil similar to today’s stylus, but capable of detecting the child’s grip and “reading’’ the child’s answers. If the child’s grip or answer is incorrect, the pencil would vibrate. During exams, the teacher would be able to disable the autocorrect mode.

The desk would also take care of many tedious and mundane tasks. For example, it could take attendance and the lunch count. Students would no longer have to raise their hands to signal whether they’re buying a hot lunch or milk.

The SMARTdesk team was inspired by a classmate who has trouble seeing and must use a magnifying lens to complete his schoolwork. The group decided to incorporate features that can help children with common visual problems like their classmate and other children who wear glasses.

A network of SMARTcameras, for example, would allow every child in the classroom to see the teacher no matter where he or she is standing.

“We started by asking ourselves, ‘How can we help people who have trouble seeing?’ and it just sort of grew from there,’’ said Hatton.

The students had to identify the problems they wanted to address, research their ideas, and then brainstorm solutions.

“The kids were able to expand their horizons by looking at science in a whole new way,’’ said Amanda Heffernan, Brian’s mother and one of the team’s two mentors. Mary Hatton, Sarah’s mother, is the other.

“I think there must be something in the water here in North Reading,’’ said Bill Cassell, a third-grade teacher at Batchelder and coach of the SMARTdesk team. “Almost half of our third-graders participate every year, and the things they come up with are just incredible.’’

If the SMARTdesk team captures a national award, the team members will receive an expenses-paid trip with their families, coach, and mentors to Washington, D.C. for a gala awards weekend in June. While in the Capitol, the winners will meet with members of Congress and participate in a science showcase, where they will display and demonstrate their innovative ideas.

Sponsored by Toshiba and administered by the National Science Teachers Association, ExploraVision was launched 20 years ago to inspire students to tackle hands-on, minds-on projects in hopes of motivating them to excel in science and technology fields. Since its inception, the program has awarded $4.4 million to 300,000 participants.