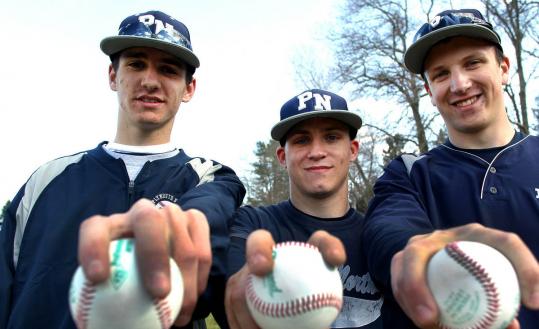 Plymouth North senior Alex Rozak remembers the joy of celebrating on the grass at Siever Field with teammates Connor Follette and Cody Holmes as 15-year-olds.

Their Plymouth Babe Ruth team had just defeated Lynn, 4-3, to clinch its second Eastern Mass. title in as many years. Holmes had been masterful in the tourney, 3-0 on the mound on the way to MVP honors. Behind the plate, Follette had been there through it all, catching both Rozak and Holmes during both championship runs.

Now a senior and a defending Division 2 state champion, Rozak has his sights set on another magical season, and that starts with embracing the pressure of being number one.

“I’m sure everyone expects for there to be more pressure [this season], but, for me, it excites me,’’ said Rozak. “I love being under those pressure situations . . . It makes you bear down and focus just a little bit more.’’

Rozak is the ace of the Eagles, a team that returns its entire pitching staff from last season’s title run.

Last season was a breakout year for both Rozak and senior Jake Stearns, the second starter in the rotation. After a strong end to his sophomore campaign, Rozak began his junior season with a no-hitter against Duxbury in the first game of the season. He finished the season 9-1, including 2-0 in the playoffs, as he was named Atlantic Coast All-Star.

“Sophomore season I ended the season very strongly,’’ said Rozak. “I came back my junior year working on my small stuff as much as I could: running, pitching, getting my velocity up.’’

Stearns’ emergence, however, was far more of a surprise, according to Plymouth North coach Dwayne Follette. The southpaw started last season with the junior varsity team before getting the call to the varsity squad near midseason. Stearns would prove crucial to the Eagles’ tournament run, compiling a 5-1 record as a starter, including 2-0 in the playoffs.

“He’s a scrawny lefty, but he throws hard with a mid-80s fastball,’’ said Follette. “His emergence last year as a starting pitcher was huge for us.’’

In addition, Holmes has been a key cog in relief and making the occasional start for the Eagles. In the past two seasons, Holmes has had either a save or a win in seven of the team’s nine playoff victories, and will play in the field wherever he is needed.

Connor Follette, the coach’s son, however, is under the microscope more than any player on the roster this spring.

A catcher by trade, Follette accepted the role of designated hitter the past two seasons while backing up Matt Walsh, the Globe’s Division 2 Player of the Year and a two-time Atlantic Coast MVP behind the plate.

With Walsh now playing as a freshman at perennial Division 2 college power Franklin Pierce, Follette is donning the mask fulltime, and his transition has been seamless.

“We’re very familiar,’’ said Rozak of his relationship with Follette. “I love Connor catching. He stops anything I throw, and he knows how to call the game just as well [as Walsh].’’

The team understands you can never fully replace a five-tool player like Walsh, but Follette has what it takes to run the pitching staff.

After all, he has done it before.

“I’ve been a catcher my whole life, so I’m used to it,’’ said Follette. “I’ve been playing with these kids forever, so [my approach] hasn’t really changed. I played at this level last year, so I know what to expect.’’

“We’ve been throwing to him [for years],’’ added Holmes. “It’s not like a new catcher suddenly came in. Replacing Matty, you can’t replace him, but Connor is a great fit, and I don’t think we’re putting any unneeded pressure on him.’’

As teams now adapt to the new regulation BBCOR (batted ball coefficient of restitution) bats that should bring about a small-ball style of play, communication between pitcher and catcher becomes that much more important.

“One minor mistake in the field can lead to a defeat,’’ said Rozak. “It’s always been that way, but now, more than ever, one small error, one small pitch location that leads to a hit, can be all the difference in a game.

“I think that’s the main focus of the pitcher now is that you can’t change anything. You have to have the exact same focus as before, to use these BBCOR bats to your advantage.’’

Nearly two years after undergoing Tommy John surgery on his right elbow, Braintree senior Pat Delano got the nod for the Wamps’ season opener against a strong Walpole squad on Wednesday.

The Vanderbuilt recruit pitched 3 2/3 innings, hitting the high-80s with his fastball, before reaching the 75-pitch limit established by the coaching staff. Delano absorbed the loss in a 6-1 defeat.

While Delano was unhappy with his first game back in the rotation, he and the coaching staff understand his return as the ace of the staff has to be a gradual process.

“Realistically, Pat has a great future ahead of him, and that’s more important than any high school victory on a cold, early-April afternoon,’’ said Braintree coach Bill O’Connell.

“We’re being realistic in what do with him and he’s got some goals in mind. We’re just trying to build him back to the point where he was two years ago: throwing in the 90s and playing as one of the top prospects in the country.’’

A night earlier, Xaverian southpaw Tim Duggan proved he was one of the strongest pitchers in the Catholic Conference, retiring the first 13 Wellesley batters he faced en route to five innings of one-hit ball.

“He looked real good this year,’’ said Xaverian coach Gerry Lambert. “His command is better. It was off and on last year, but his command has been great. He’s really pitched well and appears poised for great season.’’

The Fairfield commit didn’t play a factor in the decision, as the Raiders rallied past Xaverian, 6-3.

DiTondo ramps up as power hitter

Marshfield senior Max DiTondo is having a start for the ages.

The self-proclaimed “singles guy’’ is batting .667 with four home runs and 11 runs batted through three games for the Rams (3-0).

He went 5 for 5 with three home runs and 10 runs batted in against Duxbury on Tuesday, and hit an inside-the-park home run the following night against North Quincy.

“[Tuesday] was hard to describe,’’ said DiTondo. “It’s hard to explain how I felt. It didn’t really hit me until later that night because I was just glad we won, and I was just glad to be with my team.’’

Although the Franklin Pierce recruit hit .360 last season, he had just one home run.

The 5-foot-10, 165-pound lefthanded-hitting right fielder credits offseason workouts with wooden bats for the quick adjustment to new bat regulations. “Using wood in the offseason has prepared us with the mentality of not relying on the bat but more on ourselves,’’ he said.