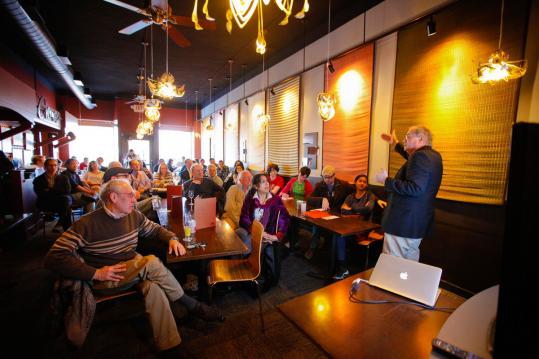 About 50 people filled a small space at the Elephant Walk restaurant in Waltham on Monday evening, many clutching glasses of red wine or colorful martinis. Yet the atmosphere was quiet and restrained, as the patrons gathered not for a postwork cocktail, but to learn about Alzheimer’s disease.

The small lecture-style lesson on the neuroscience and drug research behind efforts to fight the disease marked Brandeis University’s inaugural Cafe Science event.

The series of three lectures, slated for the first Monday of each month at the Main Street restaurant, is part of a national trend that has specialists in physics, biology, and other scientific fields explaining complicated topics in a straightforward way for mainstream audiences.

According to the university, the grass-roots phenomenon has given rise to more than 250 science cafes across the United States, most associated with colleges and universities.

“The fact is, people are fascinated by these areas of science, but a lot of them do not have access to someone who can deconstruct it for them,’’ said Jim Haber, a Brandeis biology professor who helped organize the Waltham series. “That’s the goal: to explain what scientists are doing with all that federal money they’re getting to do research, and how it benefits the rest of us.’’

Haber said he found out about the informal science lessons after witnessing one sponsored by Columbia University in New York City.

He said the Waltham location proves beneficial because it is not too far from Boston. The informal talks target Brandeis alumni and curious local residents.

“The whole intention we had is to be able to reach out to the community in which we live, which is Waltham and the surrounding community, and also to attract alumni from Brandeis from the same area,’’ Haber said.

He also pointed out that the series reflects the university’s standing in the scientific community, comparing its programs favorably to schools like the Massachusetts Institute of Technology and Harvard University.

“I think we’re celebrating the excellence of the science faculty at Brandeis, and also trying to provide laypeople with insight to what scientists are doing,’’ Haber said. “I think it’s important that prospective students and the community understand how good we are at what we do, and that we’re actually quite remarkable as a science faculty.’’

Admission to the science cafe events is $10, which includes an alcoholic beverage.

Although many of those who attended the first cafe lecture had some kind of connection to Brandeis, they said they found the Alzheimer’s presentation, led by biochemistry professor Greg Petsko, both refreshing and useful.

Anne-Elise Tobin, 27, a neuroscientist, said she does not work specifically with the disease but the topic comes up frequently.

“I have heard talks that were specifically focused at scientists, but this was focused at more of a lay audience,’’ Tobin said. “It really put together small details that I couldn’t quite place together into a big picture.’’

“In school, the focus is on science and mechanisms,’’ she said. “This is more of a societal view, like why, as humans, we should care about funding for research.’’

Mariah Henderson, a Brandeis senior studying music performance and psychology, said she came to the event because she plans to pursue a medical career, and wants to learn as much as she can before venturing into the field.

“It was an interesting topic at a place I like to go,’’ Henderson said, looking up from the restaurant’s menu after the lecture. “It certainly was a different experience. It was nice to learn and not be tested in the future. I took notes for my own benefit. I kept track of things that were important to me, and things I wanted to look up later.’’

The next lecture is May 7, when Brandeis professor Jim Besinger will discuss the Large Hadron Collider, the world’s largest high-energy particle accelerator.

In the final lecture of the initial series, Haber will explain the study of cancer via yeast cells on June 4.

Haber said he does not know whether the sessions will continue in the fall.