Libraries in schools keeping up with times 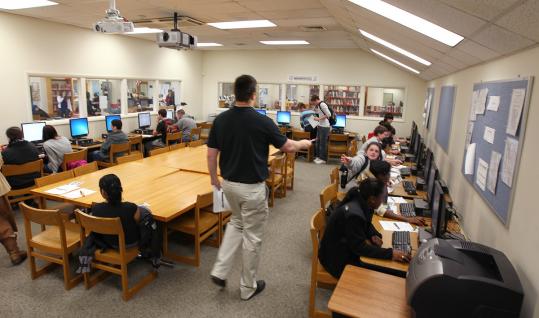 Back in the day, students stacked books onto numerous shelves that filled large, dusty rooms. Others sat at tables and took notes from huge volumes of the Encyclopaedia Britannica. Librarians flipped through card catalogs to find book titles that aided students’ research.

This image of high school libraries is a familiar memory to anyone who attended high school before the age of computers.

Today, students sit at computers, read Kindles, work on netbooks, and browse online databases for the information they need. The high school library is no longer just a room with books on a shelf. It is a multifunctional space meant to unite a community and aid the creative and innovative learning and teaching process.

High school librarians have had to adapt to the changes and master resources an earlier generation of high school students never had.

“Technology has changed the lay of the land,’’ said Susan Ballard, president of the American Association of School Librarians. “Libraries have morphed into a hybrid model that pulls resources from the traditional print format and the newer digital format.’’

The introduction of this hybrid model began in the 1990s, but the most dramatic changes have occurred in the past decade.

In 1996, Dedham High School began a five-year plan to implement technology, which at that time meant desktop computers and now means tablets and laptops.

The digital-based program is one that includes myriad assets.

“The resources really are limitless,’’ said Eleanor Rogers, Dedham High School librarian. Dedham High School uses netbooks (small laptops), Kindles, a program that allows students to download a book or periodical onto any device such as an iPad or smartphone, and an educational adaptation of YouTube.

Dedham’s broadest tool is the one every school and public library in the state can access. The Massachusetts Board of Library Commissioners provides a free database of reference books, magazines, periodicals, and newspapers.

Most local schools, such as Dedham and Norwood high schools, use a variety of supplemental academic databases that connect well with different students.

Norwood High School librarian Beth Goldman says her greatest goal as a librarian is to provide resources for a changing student body.

“With a diverse and exciting population, the goal of a librarian is to have sources that help anybody and everybody,’’ she said.

Norwood’s resources include laptops, Skype, a video chat program that various classes have used to talk to people in other countries, e-books, Nooks, and Kindles.

Rogers aims to please all her patrons. With a grant and collaboration with the Dedham Public Library, she has started a “reluctant readers’’ program.

A glamour look book, the “Game of Thrones’’ series, the “Hunger Games’’ trilogy, and graphic novels line numerous shelves inviting students to pick up a book and enter the world of reading.

“We still want to instill a love of reading in our students,’’ Langenhorst said.

The use of technology in the library has not only altered the landscape of the academic world, but also the intimate learning world of a student.

“We have kids who come into the library who don’t like to read or are afraid to read,’’ said Goldman. “But give them a Nook, and they read a whole book.’’

In this way, teachers and librarians have had to adapt to sources at hand.

“It is the librarian’s job to assist, support, suggest, and complement what is going on in the classroom,’’ Goldman said.

Langenhorst also sees the role of librarians as multifaceted. “They must teach literacy skills, library skills, and technology skills to their students,’’ he said.

A librarian’s influence also reaches beyond the doors of the library.

Librarians need to know when to turn to experts in particular fields, and which resource to pull for a student’s use.

“It is about how we can incorporate these tools into the curriculum, not about how to use the tools in isolation,’’ Ballard said.

Using a blog to improve a student’s writing skills or assigning a presentation using Prezi (a more advanced PowerPoint program) to allow creativity and innovation are just a small example of how teachers and librarians are collaborating to bring 21st century relevancy to their students. For example, Dedham freshman Keysha Miralda said her English class recently used the library’s computers to animate a scene from a book the class was reading.

The librarian’s job has also evolved to include a mastery of ever-changing technology. Teaching which information sources are valid and which are not has become a large component of what librarians are doing to aid students.

They want their students to know what is beyond a Google search and which sources are reliable, said Rogers.

“In a world where information is so accessible, librarians help [others] to understand the concept of digital citizenship and being responsible for the information shared and found online,’’ Ballard said.

This skill is one that most librarians hope to give their students for life.

This, according to Charles Mitsakos, clinical faculty supervisor at Lynch School of Education at Boston College, is one reason libraries exist.

“It is important for students to be able to use a far broader range of resources beyond the textbook, to be conditioned to draw upon those resources, and know what libraries are all about,’’ he said.

Libraries are also not just changing the way they view and access information. Their appearance is changing too.

“Libraries are beginning to look different,’’ Ballard said. “It has become a blend of cafés, bookstores, production centers, and libraries.’’

Valerie Diggs, the Chelmsford public schools’ coordinator of libraries and president of the Massachusetts School Library Association, has transitioned an old-fashioned library at Chelmsford High into a multipurpose community space, with comfortable seating and a variety of new devices.

Chelmsford wants to create “a community place that is part of the school culture,’’ she said.

Most educators see the ideal library as a balance of the print and digital realms.

“Print books are still important to what we do,’’ Langenhorst said. “The library will always be the place you can go as home base to get help processing and accessing information.’’

On an average day, students from various classes and study halls can be found in the Dedham library using the computers, checking out a book, or doing their homework.

“Kids come here for pleasure, not just work,’’ Rogers said. “It is a very lively place.’’

Maureen Quinlan can be reached at maureen.quinlan@globe.com.

School libraries keeping up with the times