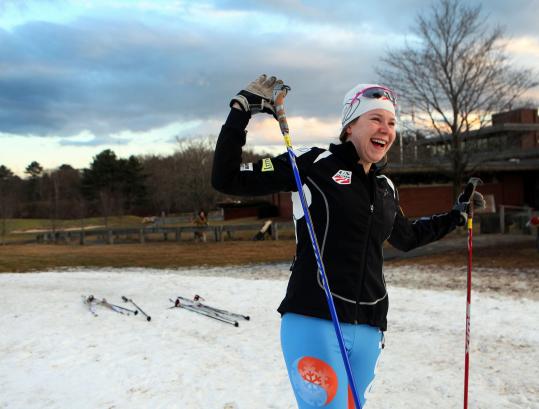 No snow? No altitude? No problem.

Despite a winter nearly devoid of the white, fluffy stuff locally, and the fact that they train at sea level, the cross-country skiers from the Cambridge Sports Union elevated their performance at the junior nationals in Utah this month.

Held at the Olympic venue of Soldier Hollow in Wasatch Mountain State Park, with a top elevation of 5,882 feet, the competition was a stern test for Corey Stock and her teammates.

“I cannot say how excited I was when the CSU girls won the club award,’’ said Stock, who is headed to Dartmouth College in the fall.

“It shows how hard we work, the time we put into it, but also how the support system is so strong,’’ she said. “Even though we live in Massachusetts, and everyone asks, ‘How do you ski when you only have two kilometers of man-made snow?’ It’s how everyone is so supportive of the coaches, the athletes, everything.’’

Their support system includes a year-round training regimen monitored by several coaches, headed by Rob Bradlee. The training, combined with the commitment of the athletes, led to eight titles for the Cambridge Sports Union contingent at the US Skiing Association’s Junior National Cross-Country Championships.

The impressive results, say the skiers, can be traced to their long, arduous workouts, often done when many teenagers are thinking about going to the beach.

“My coach always says racers aren’t made in the winter, they’re made in the summer,’’ said Hoenig. “That’s when we put the most hours in. So I think part of CSU’s great performance at the junior nationals is due to our summer training, plus spring and fall.’’

Bradlee was in full agreement. “You could see in the sprint races, with Julia, Eli, and Corey, they all came down to a finishing double-pole sprint, and they all won,’’ he said.

“They all went past somebody on the double-pole sprint. We work really hard on double-pole fitness, and there’s no question that our kids have the fittest upper bodies in the country.’’

The altitude at Soldier Hollow presented another challenge, particularly in the distance disciplines.

“It has to be more of a steady, controlled race,’’ said Stock, who felt she was prepared after competing at a high elevation during the world championships last month in Turkey.

“You have to make sure you don’t cross that line and get into oxygen debt. So I definitely learned that it’s important to stay steady, especially on the hills, where you’re using all your muscles, which requires more oxygen,’’ she said. “At sea level, you can do strong bursts over a top of a hill, or up a hill, because you can then recover. At altitude, I learned to be more consistent.’’

Bradlee said that Stock, in her 10-kilometer race, was “just hanging on for dear life, through sheer force of willpower. That’s classic Corey.

“She was saying, ‘I want to stay with these girls.’ She got to the final hill, and - boom! - she just goes and drops the other girls, putting eight seconds on them over the top. And she cruises down the hill and into the stadium for the win.

“It was the most gutsy race I’ve ever seen,’’ Bradlee said. “She’s just so mentally tough.’’

Another critical component to Cambridge Sports Union’s success, according to Bradlee and his racers, is the commitment of the Weston Ski Track, which provides snow when nature doesn’t.

“Weston has been really good, really essential,’’ said Stock. “This winter we’ve had virtually zero natural snow, but we’ve had, up until recently, enough snow to train on.’’

That combination - dedicated racers, a dedicated training plan, and a dedicated venue - has proved to be a winning formula for the Cambridge team. (Stock, Meyerson, and Kern also finished 1-2-3 overall, and Hoenig finished first overall on the boys’ side, at the Eastern High School Championship last weekend). Add a top-flight feeder system, and you’ve got all the ingredients for winning consistently.

“The Eastern Mass. Bill Koch League is really a great program that gets many young kids into skiing, and that’s super important,’’ said Stock. “If you’re going to continue with this sport and be good at it, you have to love it.’’

The Koch league, based at the Weston Ski Track, “is really important to bringing kids up into the Cambridge Sports Union, once they’re in high school,’’ she said. “So we’ve got a really great support system, really great coaches, really great athletes.’’

Brion O’Connor can be reached at brionoc@verizon.net.