THIS STORY HAS BEEN FORMATTED FOR EASY PRINTING
FOXBOROUGH

High stakes for this election 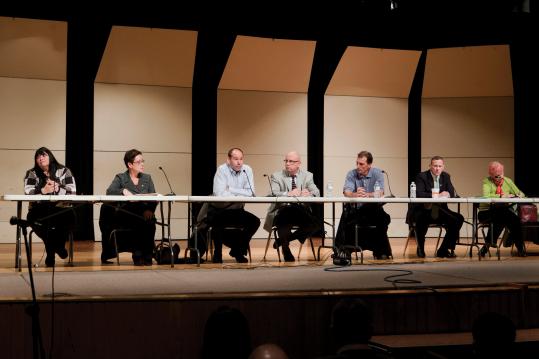 The Foxborough Board of Selectmen met last December to discuss a proposed casino for Foxborough. On May 7, incumbent Selectwoman Lorraine Brue and board chairman Larry Harrington will seek reelection to the board against four challengers. (Kayana Szymczak for the Boston Globe)
By Michele Morgan Bolton Globe Correspondent / March 1, 2012
Text size – +

Officially, it’s the election of two Foxborough selectmen. But the outcome is being watched from Boston to Las Vegas.

That’s because Foxborough’s Board of Selectmen is gatekeeper for a Town Meeting vote on whether to allow gambling in Foxborough, and in light of the narrow 3-to-2 vote on Dec. 27 that stalled the $1 billion casino proposal of Las Vegas mogul Steve Wynn, the May 7 election could easily swing the balance in the opposite direction.

Selectmen’s races in small towns usually don’t generate much attention, said Thomas Whalen, an associate professor of social science at Boston University, but this year in Foxborough will be “radically’’ different.

“There’s nothing like a controversial issue such as casino gambling to galvanize grass-roots political efforts on both sides,’’ Whalen said. “In fact, for this small area of the state, this might rival the much anticipated Scott Brown/Elizabeth Warren race for the US Senate.’’

Noting former House speaker Thomas P. O’Neill’s comment that “all politics is local,’’ Whalen said: “The moral of the story is that every vote counts, especially with so much at stake in terms of the future of Foxborough.’’

For the May 7 election, completed nomination papers with at least 50 certified signatures are due in the town clerk’s office by March 19. Already, candidates with a range of views on the subject have lined up to run.

Incumbent Selectwoman Lorraine Brue, who voted on Dec. 27 not to enter negotiations with Wynn, and board chairman Larry Harrington, who voted in favor of hearing more about the proposal, will seek reelection against four challengers.

Former selectman Paul Mortenson and former state representative Virginia Coppola, who oppose the casino proposal, are in the race, as is newcomer Richard Letson, who says he is undecided on the casino plan.

Also in the running is 14-year School Committee member Martha Slattery, who has said she wants to see details of the casino proposal. She has also acknowledged that until a specific proposal comes forward, there really is no casino issue.

What has emerged about the proposal so far is that Wynn wants to build a resort hotel complex on land across from Gillette Stadium on Route 1. He has pledged to accommodate Foxborough’s rural, small-town character by down-scaling the design and tailoring it to the property, which he would lease from New England Patriots owner Robert Kraft.

The land is currently used for stadium parking.

Supporters say they welcome the jobs and business development promised by a casino and hotel complex, while opponents say they fear round-the-clock traffic and increased crime, among other concerns.

Immediately after the idea of a casino surfaced in early December, a public relations battle erupted, with debate sometimes turning ugly at public meetings where selectmen drew boos and taunts, and, in some cases, argued loudly with residents.

The debate has simmered down in recent weeks, and attention has shifted to the town election.

In their campaigning, the candidates have pointed out that a selectman’s job involves tending to all the town’s issues, not just its most contentious one. But clearly, they are going to play a pivotal role in the latter. For the casino to become a reality, Foxborough would have to change current zoning, which bans gambling; agree to enter into a contract with Wynn; then hold a series of townwide votes. That won’t happen without the support of selectmen.

And no matter who wins the election, recent history has shown that views can change. A unanimous September vote, for example, to reject zoning changes to allow gaming was upended a week later, when Harrington apologized publicly for acting hastily and said the board should have allowed the town to decide.

Then, in December, Sullivan switched to the anti-casino side, creating the majority that rebuffed the Kraft-Wynn team.

In this election, Members of No Foxborough Casino, a grass-roots opposition group, will support candidates who reflect their belief that a casino is not right for the town, said spokeswoman Holly Steel.

“We have to trust that the elected leaders are looking out for our best interests,’’ said Steel. That means adhering to town bylaws voted into law by residents at Town Meeting to outlaw gaming, she said.

“We also feel candidates on both sides of the issue have to be transparent,’’ Steel said. “If you are for it, tell voters. If you oppose it, be clear. Then people in Foxborough can make the right decision.’’

On the other side, at least 80 tradesmen in Norwood-based Carpenters Local 535 are unemployed and in danger of losing their homes, said union business manager Joe Broderick, a Foxborough native.

“I don’t understand the opposition to the casino,’’ Broderick said. “How can you say no to something you haven’t seen?’’

In the end, people will vote for whom they want in this year’s election, Broderick said, but he is encouraging voters to seek out candidates who have an open mind.

“And, if I was a selectman, I would look for the best mitigation expert there is and get every penny I could,’’ he said of any deal the Wynn team would negotiate with the town. “Here, you practically have a goose laying a golden egg.’’