Unflinching goalie the ‘rock’ for Burlington 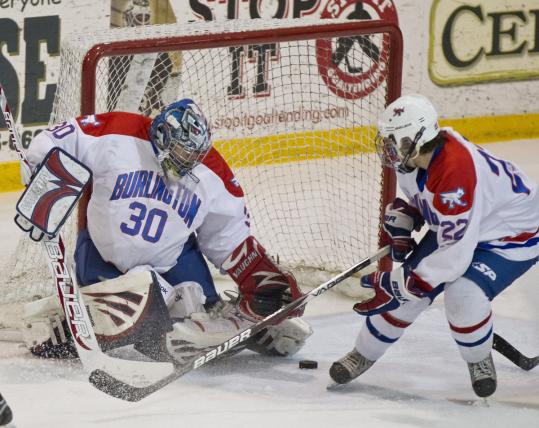 Derek DeCastro has not been to a gym in years. But the Burlington High junior takes pride in his work ethic, and his exercise routine at home using kettlebells, wrist rollers, and medicine balls.

His diligence has certainly paid dividends for the Red Devil hockey team in goal.

Burlington (14-2-6), the top seed in Division 1 North after its 6-4 loss to Central Catholic in the Super 8 play-in game on Monday night, has allowed just 46 goals in 22 games. The 5-foot-9 DeCastro has made 21 starts, registering shutouts against Reading, Winchester, and Woburn, the first Red Devil netminder ever to blank the three Middlesex League rivals in the same season.

“This team has all of the tools it needs to win,’’ said Burlington coach Bob Conceison. “Derek’s performance has been huge for us, and goaltending in these tournament games will be deciding factors for every team.’’

DeCastro first laced up a pair of skates at age 3; at 5, he decided he wanted to play goal.

“When I first started, I immediately loved it,’’ said DeCastro. “I feed off the pressure; there’s something about being the last line of defense that I love.’’

Thanks to his work with a goalie coach, Brian Daccord, and sweating through intense training sessions in his basement, DeCastro can be a game changer for Burlington in the tourney.

“Derek is capable of winning games by himself,’’ said Conceison. “He’s one of the hardest workers on this team, and his dedication to the sport shows itself on the ice.’’

DeCastro has kicked aside nearly 400 shots this season.

“Derek has been our rock all season,’’ said senior captain Steve Mattos. “We have a lot of upperclassmen on our team who know that we need to work hard in both zones to play consistently.’’

With DeCastro (14 saves) in net, the Red Devils closed out the regular season with a 7-3 win over Chelmsford in the championship game of the Cahoon tournament. Burlington was unbeaten (11-0-5) in its final 16 games of the season after a 2-1 loss to Melrose.

Conceison believes his squad will make some noise in the tourney. “Our boys want to show that they can hang with any team,’’ he said. “What they’ve done so far this season, and learned as a team, speaks for what kind of team they will be when it matters most.’’

On Monday night, Burlington outshot Central Catholic, 27-27, but the Raiders netted a pivotal go-ahead goal with 17 seconds left in the second period, for a 4-3 lead.

“We played against a team who ran’’ the Merrimack Valley Conference, said Conceison. “We showed that we could hang tough with a team like that, so hopefully that will help us down the road.’’

“This year, we’ve scored just about how many goals we let up last year,’’ said McGrath. The players “got tired of losing and we’ve certainly changed in that sense.’’

“Dave and I have been playing together since Mites,’’ said Bishop, the MVC’s Player of the Year. “Then, Drew started playing with us around 10, so that chemistry definitely helps us mesh well together.’’

“Drew always played with my younger brother’’ Mike, said DeDonato. “So even before we played on a team together, we would always been messing around and playing together.’’

Bishop, who led the MVC in assists (36), said each player adds something different.

“Dave’s got the speed, Drew’s got the shot, and I have the creative juices so that definitely makes our line unique,’’ said Bishop.

“When we meet up before every game as a line to go over the game plan against the other team, we make sure our communication is there and we’re ready to roll.’’

And this season, the Lions are playing with more of an edge.

“We’ve always had the talent, but no one showed up to play in past years,’’ said DeDonato. “We practice like we play; we all work out together and have the same goals. We have unfinished business after last year so we need to make sure we leave it all on the ice this time around.’’

Chelmsford lost an overtime thriller to Billerica, 5-4, in the preliminary round of the state tournament last year. The Lions outscored Billerica 11-2 in two meeting this season.

“We got pushed around all last year and especially in that game,’’ said Dawson. “This year we bring our all to every game and every practice, and it shows.’’

The first-liners realize that they must set the tone in the tournament.

“We can outskate any team because we work so hard,’’ said Bishop. “And if we bring our ‘A’ game, there’s no team we can’t beat.’’

Teamwork pays off for co-op squad

With four eighth-graders and five freshmen among the Marblehead/Swampscott co-op players, the team finished 12-7-2 in its first season after the program’s acquisition of Manchester-Essex.

“This year, we were lucky enough to have every girl contribute,’’ said seven-year coach Emily Hudak. “They’ve bonded well together and learned to play as a team first, which has changed this program tremendously.’’

“Senior leadership on this team is phenomenal,’’ said Hudak. “They make sure the younger girls work hard all season, putting the pressure on every team we play.’’

Hudak feels her girls are ready for tournament action. They were set to play Weymouth in the first round on Tuesday.

“They’ve been in pressure situations all season,’’ said Hudak. “But this year, their tenacity will show up as they play and if we put the pressure on early, we’ll be able to chip away.’’

Ryan MacInnis can be reached at ryan.macinnis@globe.com.