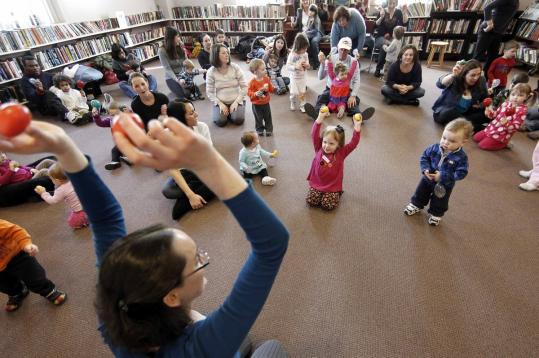 S AUGUS - After years of struggle, the Saugus Public Library finally appeared to be turning the page on a chaotic chapter in the long history of a town treasure.

The state Board of Library Commissioners restored the library’s full accreditation last year, having stripped it away in 2007 after a town financial crisis forced the library to close temporarily. Steady increases in town funding allowed the library to open for 59 hours per week, exceeding the state minimum standard.

A permanent library director was hired in June, four years after the library’s longtime executive director resigned, and an interim appointed. Trustees prepared to write a long-range plan to keep the momentum going.

Move and Groove, a music movement program for preschoolers, added a new vibe to a growing library population.

But there would be no happy ending. Instead, it would turn into a crime story.

In December, federal prosecutors charged Linda E. Duffy, 65, a former library worker, with stealing more than $800,000 in library funds over a seven-year period, from 2004 to 2011. At the time, the library was so broke it relied on fudge sales to buy new books, and on volunteers to clean bathrooms.

Prosecutors allege that Duffy withdrew charitable donations, along with fees from overdue books and videos, from a library account at Eastern Bank, deposited the funds into her personal account at the bank, and then used the money to pay the mortgage on her Saugus home, dental bills, hotel stays, and other personal expenses.

She pleaded not guilty to 15 counts of money laundering, mail fraud, and identity theft at her Dec. 20 arraignment in US District Court in Boston. She is free on a $100,000 unsecured bond. A trial date has not yet been set, according to the US attorney’s office in Boston.

But a new audit completed in December for the town provides insight into how the theft of $800,000 went undetected by library and town officials, and exposes flaws in the financial management of the library.

The alleged theft also raised questions about the town’s policy of conducting background checks on employees.

In 1993, six years before she was hired at the library, Duffy pleaded guilty to check fraud charges, totaling $120,000, and served 21 months in federal prison, according to the US attorney’s office.

Trustees and library directors who managed the library from 2004 to 2011 did not file annual financial reports with the town, as required by state law and the policies of the Massachusetts Board of Library Commissioners, which governs the state’s public libraries, according to the audit’s findings.

“The trustees did not fulfill their responsibilities,’’ said John Sullivan, a vice president of Melanson Heath & Co., the Andover accounting firm hired by the town to conduct the audit. “That would also apply to the former directors. Accurate records were not kept, nor was there any evidence that reports were filed.’’

Trustees also did not report the existence of the library acount to the town treasurer, as required by state law, according to a summary of the audit findings made public in December. Duffy also was allowed to maintain records for the account, according to the auditor.

State law requires library trustees to file annual reports listing “receipts and expenditures . . . with a statement of unexpended balance of money and of any gifts or bequests which it holds in behalf of the town.’’ The handbook for the state Board of Library Commissioners states that library directors must “maintain complete and accurate records of finances.’’ Together, trustees and the director must submit an “annual report of income, activities, and expenditures to the appropriate agency,’’ such as a municipality.

But auditors found that no reports were filed from 2004 to 2011, the period during which federal prosecutors allege Duffy embezzled charitable donations, gifts, and fines for overdue books and videos from the trustees The full audit has not been publicly released, at the request of the FBI and US attorney’s office, Sullivan said.

The board also voted to suspend with pay Ewa Jankowska, the library’s technical services director, who doubled as the interim library director from August 2007 until June 2011. The labor union representing library workers filed a grievance, challenging Jankowska’s suspension.

Mary Rose Quinn was director of the Saugus library from 1999 until 2007. She is currently the director of Stevens Memorial Library, the North Andover town library. In 2007, Governor Deval Patrick appointed Quinn to the Massachusetts Board of Library Commissioners, which sets policy for the state’s public libraries.

Michael Serino, the selectmen chairman, said the board’s actions were driven by the audit’s findings.

“We had to bring back public confidence,’’ Serino said. “In my opinion, the library couldn’t go forward the way things were going.’’

But Pamela Gill, the former chairwoman of the library trustees, defended the six-member panel whose members resigned in January, at selectmen’s request.

“We were kind of broadsided by all of this,’’ Gill said. “If we were supposed to be turning in reports, nobody at Town Hall ever said, ‘Hey, where is your annual report?’ Our main emphasis was on keeping the doors open.’’

Jean Bartolo, the former trustee chairwoman who resigned in 2008 after seven years on the board, declined to comment, saying only, “I’m glad we have the new director that we do.’’

Diane Wallace, former director of the Bacon Free Library in Natick, started as the new Saugus library director last June. Within weeks of arriving, Wallace suspected financial problems, such as no clear accounting of fines paid for overdue books and videos.

She contacted town officials, who hired Melanson Heath to conduct a forensic audit: a detailed analysis of the library’s revenues, expenses, and accounts. The audit discovered the trustees’ checking account at Eastern Bank that previously was not known to the town treasurer.

Wallace said she implemented new financial controls for the library, such as a daily report on revenue collected; also, weekly deposits are now made to the town treasurer. Payment of invoices must also be approved by the director. “There’s more accountability now in the library as a whole,’’ Wallace said.

But questions remain about the library’s governance during the seven-year period Duffy allegedly stole from its coffers.

Union leaders said they plan a vigorous defense of Jankowska. “I think she’s being made the scapegoat,’’ said Ric Casilli, business agent for IUE Local 201 in Lynn, the union that represents Saugus library workers. “Ewa was told she was ‘interim.’ They [trustees] told her to hold down the fort until a permanent director is hired. . . . A big point in our grievance is that this started under the other director.’’

Quinn did not respond to interview requests from the Globe to discuss her tenure as Saugus library director. She served as library director from Aug. 2, 1999, until Aug. 10, 2007. During that time, Duffy was promoted to full-time status in 2004, and given the additional title of library associate in 2006.

In an e-mail, Quinn did address Duffy’s tenure at the library, writing that she did not hire or promote her. “Linda Duffy was hired as the Administrative Assistant by my predecessor. Over my tenure, many employees’ hours were increased from part time to full time and back to part time based on the annual library budget appropriation,’’ the e-mail states.

Mickey Dygert, the library director who hired Duffy, is now deceased. Duffy’s criminal history is not referenced in the minutes of the January 1999 meeting of the library’s Board of Trustees. She is listed as one of three new employees hired for that month.

The minutes do state that CORI reports for employees were discussed, but provides no further explanation.

Steven V. Angelo, who was Saugus town manager, said he made Quinn aware of Duffy’s criminal history in a meeting with her shortly after she took over as director in 1999.

“It was well known, in the community, that [Duffy] had a prior problem,’’ said Angelo, a former Saugus state representative, recalling newspaper articles published about her prison sentence. “I had concerns at the time, and raised them with Mary Rose Quinn. I remember calling her into my office. . . . She made a commitment to me that she [Duffy] would not be handling any funds. I had no legal authority to press it any further.’’

Selectmen now hope to draw a strong pool of applicants to choose a new slate of library trustees. But after only one person submitted a letter of interest, the deadline was extended until Feb. 21.

“I’d like to see someone with an educational background, who maybe already has served on a board of governors,’’ said Selectman Steve Castinetti. “I’d like them to have an understanding of the working of a board, and what they need to look for in the rules and regulations that govern libraries.’’

“Personally, I’m looking to appoint someone who really has their heart and soul into the library, who really has an interest in how it operates,’’ Serino said. “Accounting experience would be helpful, too.’’