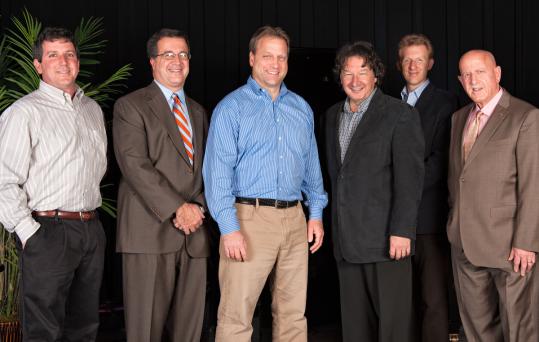 HOLLYWOOD VISITS NEWTON: Alan Flynn takes pride in his Nonantum roots and the “Lake talk’’ dialect he learned from his predominantly Italian-American neighbors in the village. Now he is extending the slang to audiences in California as a consultant for a play set in Nonantum.

Flynn, a Waltham resident who is the city of Newton’s supervisor of custodians, met last month with director Warner Shook and playwright Steven Drukman, a native of Newton’s Oak Hill village who now lives in New York. Flynn said they spent more than four hours discussing the accuracy of the dialogue (e.g., “jival’’ for “girl’’; “quister mush’’ for “good, stand-up guy’’); locations such as Silver Lake, Pellegrini Park, and Coletti-Magni Park; and the play’s general authenticity. In the coming weeks, he may also video-chat with the actors so they can hear an authentic Boston accent.

“The Prince of Atlantis’’ is a comedy about the trials and tribulations of a family living in Nonantum. An associate arts professor at New York University, Drukman has won honors including the Edgerton Award for New Plays, Craig Noel Award, Paul E. Green Award, and Alfred P. Sloan Award.

Growing up in the 1960s, Flynn lived above D&A House of Pizza (formerly Palace Pizza), and his mother worked in Giuseppe’s Sub Shop for years. His family owned The Place, a restaurant and bar, from 1972 to 2002. They also sponsored an annual road race and golf tournament, with proceeds benefiting the Newton Boys & Girls Club. To this day, the road race trophies are dedicated to his parents, William “Porky’’ and Jean Flynn.

Flynn said he enjoyed sharing his memories with Shook and Drukman, whom he met through Newton librarian Nina Taylor. She is a former classmate and Facebook friend of Matthew Arkin, the son of Alan Arkin, who has the lead role in “The Prince of Atlantis,’’ which is running from March 30 through April 29 at South Coast Repertory in Costa Mesa, Calif.

“Growing up, I always thought the Lake and its neighborhood was unique,’’ said Flynn, a father of five who regrets that job and family responsibilities will likely keep him from attending a performance on the West Coast. “I’d love to see the play take off.’’

DISCOVER YOUR CEO BRAND: Two-time, best-selling business author Suzanne Bates of Wellesley recently celebrated the release of her third book, “Discover Your CEO Brand: Secrets to Embracing and Maximizing Your Unique Value as a Leader.’’

According to Bates, successful business executives define and express their vision and personal values in a way that motivates co-workers while increasing their own visibility and influence within an organization. This leadership brand can then be used to connect with customers, attract and retain employees, shape the corporate culture, develop business opportunities, and enhance an organization’s value.

For example, Bates said, it is no mistake Apple developed into one of the most technologically innovative companies in history under the leadership of its late cofounder Steve Jobs, a lifelong innovator himself.

“I hope the people who read this book are inspired to discover their own brand,’’ said Bates, a former television reporter and news anchor who is chief executive officer of Bates Communications Inc., a Wellesley-based executive coaching firm. She previously wrote “Motivate Like a CEO’’ and “Speak Like a CEO,’’ which has been published in five languages and is in its 11th printing.

“It’s a rewarding journey for anyone who aspires to be a great leader,’’ she said, “in any endeavor.’’

CAMPAIGNING FOR THE HUMOR PARTY: Political comedian Jimmy Tingle of Cambridge will be the featured speaker at the next Walden Forum, at 7:30 p.m. on Tuesday in the 1815 First Parish Meetinghouse in Wayland center.

In his presentation, “Using Humor to Participate in the National Conversation,’’ Tingle will discuss his 30-year career and how comedians can sometimes drive political debate.

Tingle is a writer, stand-up comic, social and political humorist, commentator, actor, and activist. He has performed his one-person comedy and theatrical shows throughout the US, Canada, Great Britain, and Australia. He earned a master’s degree in public administration from Harvard’s Kennedy School in 2010.

ACCESS TO THE ARTS: The Center for Arts in Natick (TCAN) recently launched a campaign to provide free access to arts programs for economically disadvantaged individuals and families.

Administered by the Natick Service Council, the “A Smile in Every Seat’’ campaign will provide more than 300 complimentary tickets to concerts, family programs, community theater productions, classical music events, and other arts programs at TCAN. The campaign is funded by the Rotary Club of Natick, Tilly & Salvy’s Bacon Street Farm in Natick, Framingham-based Bose Corp., and Berklee College of Music in Boston.

GALA FOR A CURE: Boston comedian Steve Sweeney will emcee the Natick-based Leukemia & Lymphoma Society’s third annual Gala for a Cure on March 3, from 6 to 11:30 p.m., at Renaissance Boston Waterfront Hotel.

The event will feature dinner, dancing to the music of Sweet Tooth and the Sugarbabies, a silent auction, and a live auction directed by auctioneer Dan Flynn. Proceeds will benefit the society’s mission to cure blood cancers.

People items may be submitted to Cindy Cantrell at cantrell@globe.com.