A new troupe to light up area theater 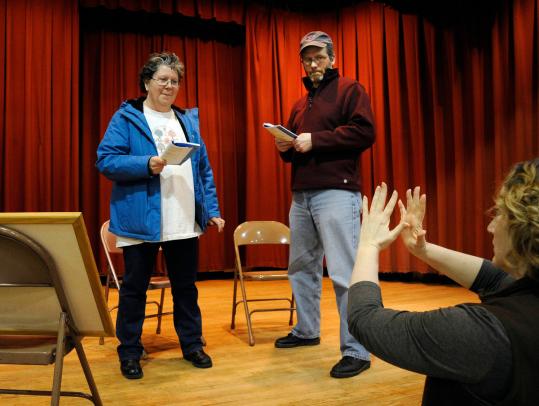 Katherine Alix-Gaudreau and Kim Beauchemin love the theater life but got tired of the traveling. “We did theater together on the North Shore, but it was an hour’s drive,’’ said Beauchemin, who lives in Marlborough. Alix-Gaudreau lives in Ashland.

They solved the problem with a bold stroke. “We decided to start our own theater company in Marlborough,’’ said Beauchemin. Enchantingly called Ghost Light Players, the troupe mounts as its first production the quirky play “Almost, Maine,’’ which runs the weekend of March 23 at the First Church of Marlborough.

“The church said, ‘We’ve got this wonderful space, is it something you’d be interested in?’ ’’ said Alix-Gaudreau, the group’s artistic director. “It was very kismet, the way it happened. Last June we really started talking about doing theater there. The church has been exceptional. They really want this to work.’’

Getting the rights to a musical, and staging it, is an expensive proposition. “We wanted to do something that didn’t put the company in hock right away,’’ said Alix-Gaudreau. So they chose “Almost, Maine,’’ which can be staged with minimal costumes and sets.

The next piece of business was getting the word out about Ghost Light Players.

“We did a meet-and-greet at the church,’’ said Alix-Gaudreau, whom everyone calls Kat. “I thought five or 10 people would show up. There was a stream of people when we got there, none that we’d seen before. It was astonishing. More than we ever expected.’’

The turnout for auditions last month was also strong. The cast for the play called for eight actors. “A lot of men tried out. That’s unusual in community theater,’’ said Alix-Gaudreau.

Jake Lewis had done theater at Framingham High School and UMass-Amherst, but none in the last 10 years. “The last time I acted was when I did ‘Henry V’ my freshman year.’’

Lewis is a teacher in Franklin and lives in Marlborough. When he saw the Ghost Light Players’ audition notice, he couldn’t wait to get there. “I liked that they weren’t just doing a show, they were creating a community within a community. Kat wanted everyone to get to know each other. She’s a big fan of ensembles and people working together.’’

“Almost, Maine’’ is a series of vignettes about relationships. Lewis is playing two roles. “Jimmy is kind of a loner. Dan has lost something in life and something in himself as he’s gotten older.’’

Emily Goldfarb grew up in Framingham and lives in Marlborough. After seeing an ad for the Ghost Light Players’ meet-and-greet, she auditioned and landed the parts of Marci and Gale.

“Marci’s a defeated housewife who feels her husband isn’t paying attention to her and their children,’’ Goldfarb described. “He forgets their wedding anniversary. She’s trying to figure out if their relationship has a future.’’

Gale, the other role, is totally different. “She’s a happy, loving, caring woman who has been in an 11-year relationship and can’t figure out why they’re not married yet,’’ said Goldfarb.

Beauchemin will stage-manage “Almost, Maine.’’ She was in a number of musicals in high school. But once she started working backstage, she’d found her calling. “That’s where the magic of putting the magic on stage is.’’

Alix-Gaudreau grew up in North Attleborough and took to theater life early. “The first time I was on stage was first grade. I sang a solo: ‘Oh, Christmas.’ In high school I was president of the drama club.’’ She got a degree in theater and works as production coordinator and assistant editor for Iguana Films, which focuses on educational documentaries for PBS.

The new company is already considering its next production. “The church has a nice outdoor space,’’ said Alix-Gaudreau. “We might use it to do Shakespeare this summer.’’

Considerable thought was given to naming the theater. “We wanted something old-fashioned, vaudevillian,’’ said Alix-Gaudreau.

There are numerous theatrical superstitions regarding why a light is left on stage, including to ward off ghosts. Alix-Gaudreau wrote her own thoughts on the matter and put them on the theater’s website.

“A ghost light is a light left on the stage of a theater when all other lights are dark. There are some who believe this to be merely for safety, while others believe it appeases the ghost that haunts the theater. We like to think we’re avoiding the bad luck or sadness of a theater being left ‘dark’ with no shows running.

“Which do you believe?’’