THIS STORY HAS BEEN FORMATTED FOR EASY PRINTING
WELLESLEY 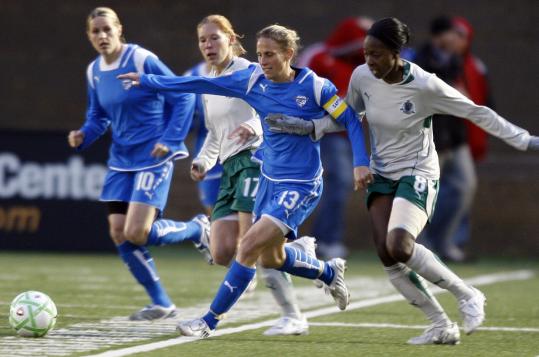 As the coach of three high school girls’ teams outside Chicago in 1977, Connie Bauman noted that salaries for boys’ coaches were much higher than the girls’.

“It was lopsided,’’ she recalled.

She filed a class action suit against the school district, which included four schools. “We didn’t tell our athletic directors,’’ said Bauman. “We knew they’d try to talk us out of it.’’

Nine months later, the court ruled in favor of the girls’ coaches. They received raises.

“The schools knew they had no case. It was a great day. That’s why I’m so passionate about Title IX,’’ said Bauman, an associate professor of physical education and sports medicine at Wellesley College.

Title IX, the groundbreaking legislation that resulted in increased athletic opportunities for women, turns 40 this year.

To recognize its anniversary, and handicap the battles still being fought, Wellesley College held a panel discussion that drew over 200 student-athletes to Alumnae Hall Monday night.

Although Title IX improved the culture of women’s sports, it hasn’t been a panacea. Battles that were fought in the 1970s continue today, when men’s sports dominate the college and professional ranks. Women want their fair share: equal coaches’ salaries; better facilities; more scholarships; more fans. But clearly, Title IX is a major reason why high school girls’ participation has increased 945 percent since 1972 and 460 percent on the collegiate level.

Women’s sports may not attract the ratings of their male counterparts; but women are heavily entrenched in sports media, as sideline reporters, anchors, writers, and columnists.

In 1977, Ludtke was reporting on the Yankees-Dodgers World Series for SI. Although she had credentials for clubhouse access, the Yankees wouldn’t allow her in, although, she said, “Billy Martin [Yankees manager] would let me in the back door.’’

Before Ludtke could enter the Dodgers clubhouse, the players put it to a vote. “I was told it wasn’t unanimous. It was majority. It didn’t matter.’’

Ludtke was sitting in the auxiliary press box when Game 1 of the World Series began. She was then called to the main press box and told that baseball commissioner Bowie Kuhn had overruled the Dodgers’ vote. Time Inc. filed a federal lawsuit against Major League Baseball. During the 1978 World Series, the clubhouse doors were open to female journalists.

The legislation allowed women to flex their muscles beyond their own playing fields.

“Title IX prepared me to compete,’’ said ESPN’s Stiff. “I’ve been in a lot of board rooms with just men.’’

“I’m a product of Title IX,’’ said Lilly. “I went to [North Carolina] on scholarship,’’ leading the Tar Heels to four NCAA championships. She played in three Olympics, winning gold in 1996 and 2004, and is the only woman to play in five FIFA Women’s World Cups. After playing for several pro teams, including the Boston Breakers, she retired in 2011. She played in 352 international games, the most in soccer history, women or men.

To promulgate women’s sports, Lilly said: “Girls have to see older girls doing things, then say, ‘I can do it.’ We need young girls watching sports on TV.’’

But Stiff asked, “When do women have time to watch sports?’’ They’re multitasking.

Title IX has been a big boost for females receiving college athletic scholarships. One interesting reason, Stiff pointed out, is “dads helping their daughters in sports helps tremendously.’’ A free, or nearly free, ride to college may be the result.

Pappano, a former Boston Globe education columnist, would like to see “more moms coaching at the YMCA level.’’

“My whole career is because of Title IX,’’ said Baltzell, a member of the US National rowing team in the early 1990s. She was also on the 1992 Olympic team.

“It made tremendous strides in the seventies and eighties, then there was kind of a lull. We have to be careful not to regress. One of the concerns [at Wellesley] is our sports center. We haven’t kept up with the teams we compete against.’’

The college’s building plans include a major makeover of the field house. “It’s a top priority,’’ said Webb.

Last year, Kimberly Eaton, a pre-med student at Wellesley, was the NCAA Division 3 golfer of the year.

The college’s student-athletes knew a lot more about Title IX after the panel discussion.

Rachael Goldenberg, a senior softball player from Rochester, N.Y., was an intern last summer at the National Women’s Law Center in Washington, D.C., where she researched Title IX issues. She found high school girls’ team coaches who had “experiences of inequality.’’ The center looked into it.

When Title IX got rolling in the 1970s, Ludtke, who grew up in Amherst, remembered thinking “This is something we’ve got to pay attention to.’’

Women have. As Baltzell, the sports psychologist, put it, Title IX is “the power of what a piece of legislation can do.’’